The crew gets together to predict tomorrow's game against our de facto rival.

Share All sharing options for: KU Predictions: at Kansas State

The Sunflower Showdown, part 2. Apparently everyone decided to wait a few weeks to become really offended by a dunk in the closing seconds of the first game, so now it's going to be "extra motivation" in the return game. Will it make a difference? Our crew tells it like it is:

fizzle406: I’m worried about this game. KU should easily win, but they should have also easily won the last 2 years. I think these teams play on a neutral court 10 times, KU wins the majority of those games. I don’t know. I had a decent point in my head when I started this but I’m just rambling now. Kansas 77, Kstate 74

mikeville: I’m strangely confident going into this weekend. I think it will be a race to 70 and whoever gets there first, wins - and I don’t think KSU has the offense to get there at all. Kansas 83, Kansas State 67

KU Grad 08: The past two years, I’ve gone with a "sure it’ll be a war, but I just don’t think KSU is good enough to beat us, regardless of where the game is played." That bit me in the ass twice, so third time is the charm! Kansas 72, Kansas State 65

dnoll5 Well, this is the one game that they care about, and it is the one game that has given their stupid arena a nickname it only lives up to on one or two occasions per year, plus they seem really hell-bent on revenge for a meaningless dunk, and their students and alumni will probably go the extra mile to act like clowns after their administration scolded them with a citizenship video, so I’ll say KU wins easily. Kansas 88, K-State 68.

David: I'd love to see a blowout here, but Kansas State is too good at turning games into muddy slugfests at home. Still, Kansas seems to have found its stride and there's just too much of a talent gap here for me to pick K-State outright. Kansas 70, Kansas State 66

Winmore: After Kansas went undefeated through their first 19 visits to Bramlage Coliseum, it feels like a bold faced lie to hear KU has lost up there the last two years in a row. But it’s true. Bruce Weber’s Wildcats have played very well against the ‘Hawks in the Little Apple. Kansas has turned the corner this season though. With Oklahoma and West Virginia tripping up, and just five games to go, Bill Self and his boys can put the essential death grip on a conference title if they take care of business against Kansas State on Saturday. Look for the crowd to lose their collective minds when Brannen Greene absorbs their hate to go 5 for 5 from three in an absolute Cat ass kicking. Kansas 96, Kansas State 74

misterbrain: I've seen lots of talk about K-State students trying to throw Greene a lot of shade to get in his head. What they don't realize is that he is used to getting it from his own coach, so it isn't possible to get it worse from the opponent. Apparently K-State actually spent time practicing dribbling out the clock. Unfortunately, they probably should have spent time practicing playing defense while down double digits as the clock runs out, because there is no way this one stays close. Kansas 87, Kansas State 65 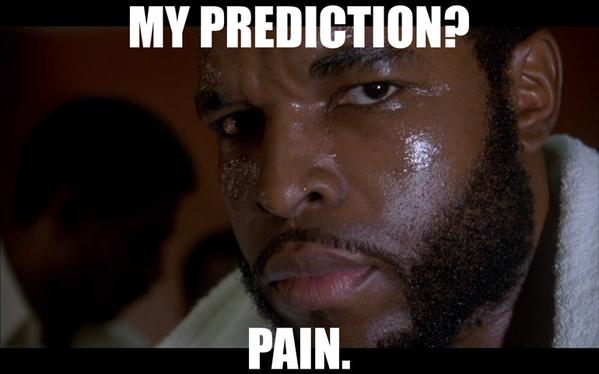