A quick look ahead to Saturday's game between defending Big 12 Co-Champions.

As far as conference home openers go, it doesn't get much better than this for Kansas fans. Early in the year this game was looking like a nice tune-up before heading to Ames on Monday. However, Kansas State has had quite a turnaround from their early season struggles and are now projected as a tournament team in a lot of way too early bracket projections. Kansas State already has two wins in conference, knocking off one of the teams expected to compete for the Big 12 title in Manhattan (Oklahoma State) and winning in the very difficult atmosphere in Fort Worth. As we know, getting wins at Texas Christian can be quite the challenge. The Wildcats have had some issues in Lawrence over fovever and on paper it looks like those issues should continue forever.

The early season struggles for K-State resulted in losses to Northern Colorado at the Octagon of Doom and then two losses in Puerto Rico. However, Bruce Weber seems to have fixed some of the early season issues and has them playing pretty good basketball lately. The Wildcats haven't lost since Georgetown demolished them in Puerto Rico on November 22. This does not appear to be all fool's gold either as they have wins over Gonzaga, George Washington, and Oklahoma State. With that in mind, lets get to know the Wildcats a bit better. 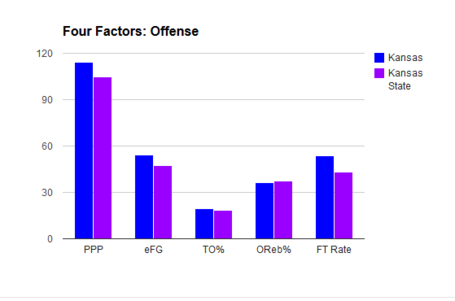 As you can see when comparing the four factors, Kansas State doesn't really perform all that well on the offensive end of the court. Kenpom has their adjusted offensive rating as the 169th best in the nation. But just looking at the season long stats tend to downplay them just a little bit, over the last six games they have averaged 1.14 points per possession on the offensive end. Without breaking down the improvement for each component on offense, it appears as though they have simply started shooting the ball a little bit better and have started taking care of the ball a little bit better.

They are led by freshman Marcus Foster who is averaging 14.1 ppg with a 102.8 offensive rating on the season. Foster finishes about 1/4 of the possessions when he's on the floor. Thomas Gipson is second on the Wildcats in scoring at 11 ppg. Jevon Thomas was also added to the rotation after Christmas, he has been pretty underwhelming from what I've seen but he does take a bit of the load off Will Spradling unfortunately (for us). 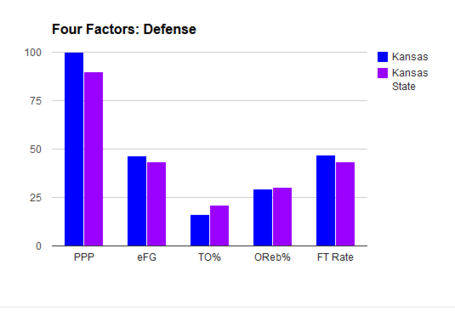 Moving to the other side of the ball is where we start to talk about K-State's strengths. Kenpom has the Wildcat defense rated as the 11th best as of today. They're holding opponents to just 0.9 points per possession on the year but it should be noted the best three teams they've faced this season have scored over a point per possession against them. Not to say they aren't good, just ease concerns a bit. As you can tell by looking at the chart, they do turn their opponents over a little more than 20% of the time. That might be a bit of a concern. Other than that, their numbers are buoyed by opponents shooting only 25% on 3 pointers and 63% on free throws so far this year. It's pretty obvious that defense isn't going to have much (if any) impact on opponent free throw percentage and research has shown that opponent 3-pt percentage is also unlikely to be influenced too much by the defense as well.