Normally I wouldn't do something like this, but, I have this forum and so I'm going to use it.

We all know that cancer sucks. You see these Stand Up To Cancer campaigns and St. Jude drives and everything else. Last season, the Kansas Football team was all-in on #TeamCole and is still posting to that hashtag, which is great. But until recently, I personally didn't know anyone that had to deal with cancer.

That all changed a little over three months ago.

My cousin Robyn was diagnosed with liver cancer. Stage IV, inoperable, liver cancer. It was an extremely slow-growing tumor that doctors estimated that she had for years, but by the time they discovered it, it had spread to both lobes of her liver and encompassed the primary vein leading away from the liver. Due to its size and location, a surgeon said it was inoperable. The prognosis was - is - disheartening. The oncologist said that while there are exceptions, he gave her six months without treatment, possibly up to a year with treatment, as it was thought that treatment would be mostly ineffective.

Regardless, they began chemotherapy right away. Three months later, the latest update shows that tumor has shrunk three centimeters on both sides. This has given doctors hope that radiation is now an option, and they are seeking a second opinion on surgery. The prognosis hasn't changed, but there is hope.

Robyn is just a normal, regular, every day person. She's only a few years older than I am. She doesn't smoke or drink. She has two grown sons; fortunately both are close to home. It has really been a shock to me. It can literally happen to anyone, anytime.

I'm not here to ask you for money. There's no GoFundMe page or anything like that. If you would like to help, I will give you the opportunity to do so in a moment, but what I really want is to "give" you a T-shirt.

Let's Mow Down Cancer shirts are being produced locally in Emporia. This is not a fundraiser. The shirts are being offered at cost by The Sports Fan in Emporia. If you would like to emotionally support Robyn or anyone else with cancer with a "Let's Mow Down Cancer" t-shirt, I will personally subsidize your purchase to where it will only cost you $5 per shirt. (Why did I say "give" you a shirt? I guess I really meant "get" you a shirt!) You can choose almost any color (but keep in mind the print is green). Email me at mikejplank1@gmail.com or let me know in the comments. I take Paypal at that email address, I'll let you send a check through the mail, or anything in between. (For example, buy me a Hefeweizen at KC Bier Company!)

Robyn lives south of Emporia, and her two boys enjoy the "sport" of lawn mower racing (hence the title of this post). Our Grandpa Walt was a big KU fan and enjoyed listening to Max Falkenstein broadcast KU games over the radio. Despite one of our relatives foolishly going to K-State (you know who you are, Kayla), Robyn is still a Jayhawk through and through.

Despite the hope that we have that treatment will ultimately be successful, we recognize that the odds are still long, and the overall prognosis still hasn't changed. With that in mind, Robyn does have a few things she wants to check off her bucket list. She has never been to a Chiefs game. She would like to go to a Royals game this summer - ideally George Brett Bobblehead Night on Sept 30, but obviously anything would be amazing. She's been to football games, including one a few years ago on my season tickets, but I'd like to get her into Allen Fieldhouse as well. If you can help with any of these, I'd be humbled, honored, and gracious for your support.

Because cancer sucks. So regardless of whether you want to Stand Up To Cancer, Mow it Down, or do whatever it may be, we're all on the same team here. If you would like to share your story, or the story of someone close to you, I encourage you to do so in the comments. 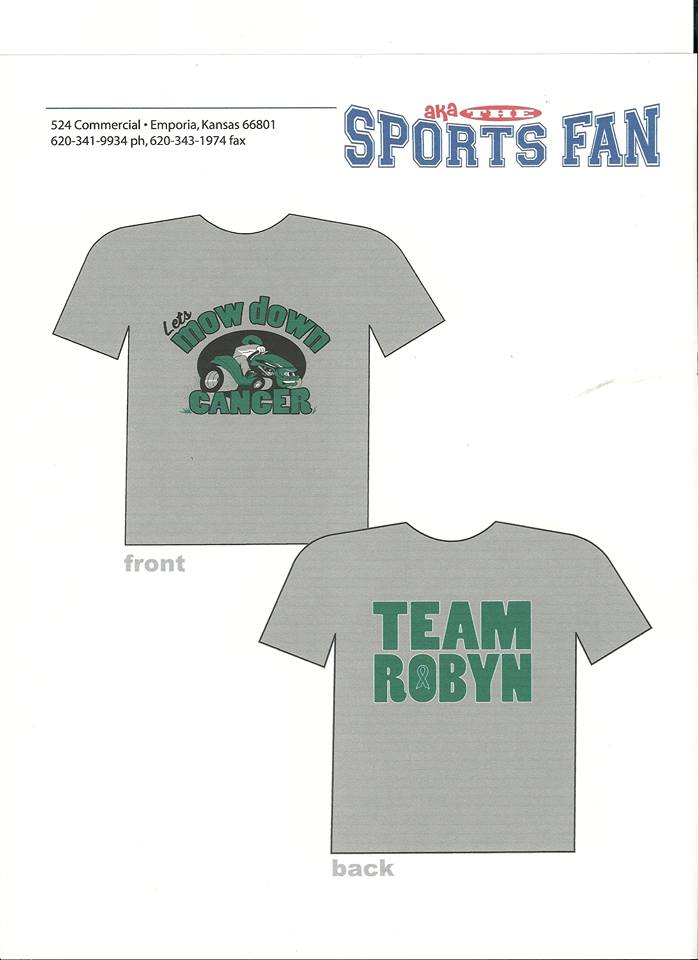