There needs to be repercussions for what happened at Baylor, and the conference is the only entity who can deliver something appropriate.

Share All sharing options for: The Baylor Bears should be evicted from the Big 12 and here's why

As we're all aware, Baylor and its football program has been all over the news lately - and for good reason. Football as a sport itself is also under attack, from the NFL and concussions all the way down to this monstrosity that calls itself "television"...

But let's ignore for a moment what we know (or think we know) about the "football culture" of Texas; many coaches have come under fire in the last 10 years for the way they treat their players, notably Mike Leach and our formerly very own Mark Mangino.

The public is just now beginning to take its head out of the collective sand and realize what's been going on for decades - big time college football lends itself to a win-at-all-costs mentality.

Among many examples, this mentality is what gave us the Pony Exce$$, it's what enabled Jerry Sandusky (and Joe Paterno) at Penn State for 25 years, and it's what has now given us the 2016 Baylor scandal.

The universal outcry for the allegations against Baylor is not surprising. However, I, for one, have not been particularly impressed with the way Baylor has handled it.

Coach Briles was a players coach, but he also was a very powerful father figure. He, through the assistant coaches, to the best of my knowledge, said ‘here are the rules.’

From Ken Starr's multiple awkward and tone deaf interviews to the statement put out by (former) head coach Art Briles, it doesn't seem to me like Baylor has truly learned its lesson.

I can only assume the report, which is not independent, supports the conclusions that the Board has already drawn.

Now, of course, NCAA investigators are probable for Baylor's future. But what good will that do? One of the biggest scandals of the past 25 years brought nearly unprecedented sanctions that lasted all of what, two years?

Short of an SMU-style "death penalty" what is anyone to do? How can a message be sent that this win-at-all-costs mentality is not acceptable?

Well here's a crazy idea - why not boot Baylor out of the Big 12?

Thanks to Dennis Dodd at the Big 12's summer meetings, we know that the option exists and Baylor could be removed for violating the league's bylaw requirement to "maintain institutional control." Shoot, schools get kicked out of conferences for simply sucking at football these days. It would take eight schools to vote "Yay" and Baylor would be gone.

Sure, the NCAA might do something - several years from now. But who's to say they won't reverse course a la Penn State?

From the Pepper Hamilton report:

Football coaches and staff took affirmative steps to maintain internal control over discipline of players and to actively divert cases from the student conduct or criminal processes. In some cases, football coaches and staff had inappropriate involvement in disciplinary and criminal matters or engaged in improper conduct that reinforced an overall perception that football was above the rules, and that there was no culture of accountability for misconduct.

This informal system of discipline involves multiple coaches and administrators, relies heavily upon individual judgment in lieu of clear standards for discipline, and has resulted in conduct being ignored or players being dismissed from the team based on an informal and subjective process.

This is how I would sum up what I'm hearing out of Baylor: "We're sorry, we're really sorry. (But we can't really tell you what we're sorry for.)" 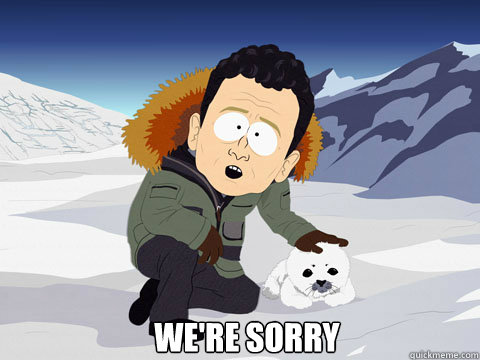 But Baylor doesn't seem to want to do anything at this point! "Hey, we fired our coach, isn't that good enough?" Out of the eight fully grown, purportedly Christian men in charge of the Baylor football program, men who (allegedly) covered up multiple felonious crimes, seven of them will keep their jobs for next year in what is admittedly a play to stabilize recruiting.

Has Baylor learned nothing? Is it still win-at-any-cost? Why are there still heads in the sand?

So if the NCAA can't be counted on to do anything and Baylor has shown us that they're not willing to do anything, how should the Big 12 act? Should the Bears be evicted from the league?

This is just one blogger's opinion, but... Yes.

A message needs to be sent. I'm not saying cancel football - that would affect schools other than Baylor. But something needs to happen here, and it seems to me like this is the best option.

Replace them with anyone. Houston. Memphis. New Mexico. Does it really matter? When Kansas travels to Waco on October 15, 2016, what will Baylor be looking at on the visitor's sideline? Surely it'll be a peek into their very own future, anywhere from two to four years from now. Baylor has already seen all but one of its 2017 class decommit, and seven members of the 2016 class are actively trying to get out of their National Letter of Intent. According to some parents of recruits, the whole environment at Baylor is "toxic." And with the majority of the coaching staff returning for next season, why should anyone expect anything to change?

Let's not even mention the fact that it apparently took some political assistance to get Baylor into the Big 12 in the first place. (Oops.) An example needs to be made here, and the Big 12 Conference is seemingly the only entity that can do it. The question is, will they?

This isn't even Baylor's first major scandal since they joined the Big 12. Now, I'm not convinced that two events 13 years apart can let someone view Baylor as a repeat offender, but something in the culture down there has allowed these scandals to happen.

According to Dennis Dodd in the previously linked article, there's currently no movement to expel Baylor. We know that it was discussed, but not to what extent.