In honor of Perry Ellis's senior season, I decided to make charts going back four years, to 2013, for all notable Jayhawk players. Not only is that the length of Perry Ellis's time in a KU uniform, but it's also exactly how far back KenPom.com's categorized player data goes. So to tweak the nose of the hoary criticism of Ellis that he is no good against better teams, I decided to use KenPom's "Tier A+B" stat line for these graphs showing player performance restricted to KenPom Top 100 games.

As always, the 20% Usage and 100 ORtg dividing lines are important. If your usage is less than 20%, someone else on the team has to pick up your slack. It's nice to choose your shots, but SOMEONE'S gotta shoot the ball at some point. Even if your ORtg is insanely high, you're not helping your team much if your chance to score only comes once per game.

If your ORtg is less than 100, that means you are dragging your team below average offensive output on your possessions. That's pretty bad if you're in the lower left quadrant -- it means you're kind of incapable of carrying any weight on offense. If you're above 20% usage it's worse, but not necessarily a mortal sin. It could indicate you are a good player stretched thin. Someone's got to do the dirty work. Consider this my plea for the Redemption of EJ.

Note: On the graphs below, the player's name appears next to the data point of their most recent year of play.

Wiggins' dot was so far out there I didn't see it and had to add it to the graph image after the fact. His 26.5 %Poss is not like Jimmer Fredette level insane, but it's pretty high for a KU player. Just imagine how high his ORtg would be if he got a whistle every time he was hacked on a drive.

Green, Graham, and Tharpe being clustered so closely together is a bit of a surprise. Greene's A+B statline is his worst category, as he has disappeared somewhat in the 'B' games. Besides erratic PT, though, his shooting is less unearthly against quality teams, and the turnovers bring his efficiency down significantly below what you really want to see from a gunner.

The similarity of Graham and Tharpe makes more sense; they play like Bill Self combo guards, initiating offense and taking a shot here and there. Graham shoots a little bit better, but Tharpe was a better facilitator (and playing in a more, uh, pass-centric kind of offense), so they end up close.

Mason increased his usage even more this year, with hardly any efficiency dropoff, which is already impressive, but even more so considering last year it seemed like he was maxed out. Selden and Svi deserve props for their leaps up out of the lower left quadrant, though it could also be they were underperforming last year, along with a lot of the team. I hope they got really good at vaporwave and Flappy Krush Saga, or whatever it is kids did in those days. Still, in the year of our lord 2016, Wayne Selden is a legit good player against top competition. 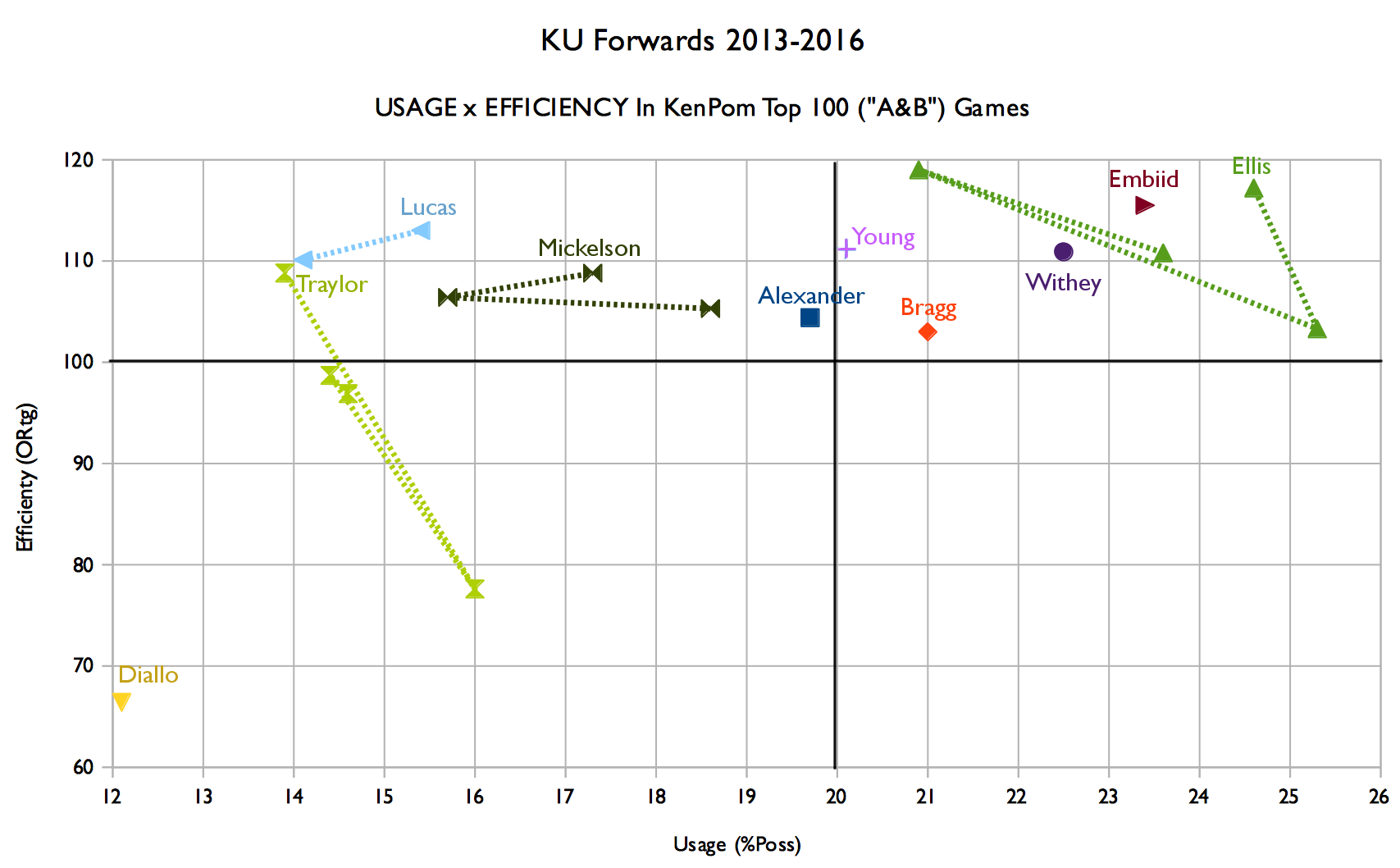 PMFE! His lowest-usage year was Wiggins' year, of course, but this year he's almost as efficient while carrying a heavier load. Perry Ellis is good at the basketball, and it's just amazing that he has maintained this level for all four years. Like Self's championship streak, Ellis won't be fully appreciated until after he's gone, long enough for people to remember, "Wait, THAT happened??"

Traylor seems to be picking his moments better on offense, and getting efficient results, partaking in a general team-wide snapping of last year's malaise. He's now scoring at the rate and efficiency of.. last year's Landen Lucas. Lucas is surprisingly efficient, though--if you had to guess the 4th highest ORtg in Big 12 play, I don't think LL33 would be the first name off your lips.

Mickelson improved from last year, but didn't break into a new level of play. From a player development perspective, 2014-2015 really seems like a lost year. (The first bowtie datapoint for Hunter is at Arkansas in 2013.)

There is not much to say about the remaining players that isn't evident from the graph. You probably didn't know Diallo was THAT far down there. Bragg is doing pretty well for a freshman. Not as well as Embiid, which is probably Bill Self's fault.