Jayhawks Who Went on to Shine in the NFL

As we wish well our current crop of Jayhawks headed to the pros, let's take a look back at the former Kansas football players who went on to have successful careers in the NFL. Though the list may be small when compared to the alumni of football powerhouses, the 'Hawks have produced three Hall of Famers, a fourth who should be there (Hadl), and two corners currently playing at the top of the league.

Share All sharing options for: Jayhawks Who Went on to Shine in the NFL

Congrats to Kansas Jayhawks Ben Heeney (LB - Oakland - 5th round), JaCorey Shepherd (CB - Philadelphia - 6th Round) and Dexter McDonald (CB - Oakland - 7th Round) on getting the call in this past weekend's NFL Draft.

Congrats to Nick Harwell (WR - Dallas), Tony Pierson (RB/WR - Chicago) and Cassius Sendish (S - Cleveland) as well. They may not have been drafted, but they didn't have to wait long for NFL teams to call them up and sign them to rookie free agent contracts.

Best of luck to all of them as they try to make their mark in the pros.

Here's a look at former Kansas Jayhawks who went on to make the biggest impacts in the NFL. After playing his rookie year in New York, McCormack was drafted into the military and shipped off to fight in the Korean War. When he came home in 1954 he found the old Yanks defunct, and himself out of a job. He wound up on the Cleveland Browns' roster. Playing D-line in 1954, McCormack helped the Browns win an NFL Title. In 1955, Head Coach Paul Brown moved McCormack to right tackle where he served as one of the immovable bookends of a Cleveland line which became famous for establishing Paul Brown's revolutionary concept of the passing pocket, en route to repeating as NFL Champs in 1955. Between 1957 and '62, McCormack and that line served as the wrecking crew behind which Jim Brown established himself as the best running back in the NFL. In his memoir, Paul Brown wrote that "I consider Mike McCormack the finest offensive tackle who ever played pro football."

Mike McCormack was elected to the Pro Football Hall of Fame in 1984. McClinton was a three time All Big Eight selection at Kansas, his star power so impressive that the Los Angeles Rams saw fit to draft him after only his junior season, a fact nearly unheard of in those days. The move was due to the rivalry the NFL found itself in with the fledgling AFL, which began play in 1960. This rivalry gave rise to a mad dash for the best players. McClinton chose to return to Kansas for his senior season though, and helped the Jayhawks win the first bowl game in the program's history - the 1961 Bluebonnet Bowl. Following that game, McClinton was drafted by the Dallas Texans of the AFL where he would play running back and tight end. Added to a backfield with the AFL's best running back, Abner Haynes, and newly acquired quarterback, Len Dawson, McClinton helped the Texans become the most explosive offense in the league. McClinton was named AFL Rookie of the Year as the Texans went on to win the 1962 AFL Title. McClinton went with the team to Kansas City in 1963 where they became the Chiefs and would go on to appear in Super Bowl I in 1966. McClinton became the first AFL player to score in the Super Bowl after catching a 7-yard slant pass from Len Dawson to tie the game at 7-7. Though McClinton and the Chiefs lost that first Super Bowl, they would return in '69 to win Super Bowl IV.

Curtis McClinton was inducted into the Kansas City Chiefs Hall of Fame in 1995.

Curtis McClinton's backfield mate at Kansas, first as a running back and then starting quarterback, John Hadl became the captain of one of the most potent option running attacks in the nation. At the time, Hadl was Kansas' highest ever draft pick, selected 10th overall by the Detroit Lions, but Hadl chose to go to the warmth and sunshine of San Diego and the AFL, which was quickly establishing itself as a pass happy alternative to the NFL. Under the tutelage of S.D. Head Coach Sid Gillman, Hadl went from being a primarily running quarterback during his time at Kansas to one of the best passers in the pro game. Hadl helped San Diego win the AFL Title in 1963, and played for two others in '64 and '65. Throwing to future Pro Football Hall of Fame wide receiver Lance Alworth from 1965 to '69 Hadl averaged more than 3,000 yards and 23 TDs. Those numbers may sound pedestrian by today's standards, at the time though, no other quarterback in football was cranking out those kind of stats on such a consistent level as Gillman's offensive game plan stretched the field with deep passes seen as anathema to established football coaches of the '50s and '60s.

John Hadl was inducted into the San Diego Chargers Hall of Fame in 1983. Sayers is the highest draft pick in Jayhawk football history, selected as the 4th and 5th pick of the NFL and AFL Drafts respectively. Unlike McClinton and Hadl, Sayers opted for the established league of the NFL, the brighter lights of Chicago over Kansas City, and playing for Bears coaching legend George Halas. Halas wasted no time in utilizing Sayers' talents. One of the best open field runners in NFL history, Halas had Sayers running out of the backfield, catching screen passes, returning kick-offs and punts, and had he the technology in those days he probably would have cloned Sayers to put him out at wide receiver too. Sayers was the unanimous NFL Rookie of the Year in 1965 after scoring a then NFL record 22 TDs (14 on the ground, 6 through the air, and 1 punt and kickoff return a piece) while piling up a then record 2,272 all purpose yards and tying a record for 6 TDs in a single game. In '66 and '67 Sayers firmly established himself as the best offensive player in football, breaking his own all purpose yards record in '66 with 2,440 yards. But all that overuse began to break Sayers down. In 1968, Sayers was piling up yards at a sick rate thanks to an unreal 6.2 yards per carry average, when in the ninth game of the season his right knee was wrecked while returning a punt. Even though he came back from the injury to produce a solid 1969 season, his breakaway speed was all but gone. Early in the 1970 season Sayers' left knee was injured. Running on two wounded sticks, Sayers' career was effectively over. Though his career was short, his star power was unforgettable, as Sayers remains to this day the youngest inductee into the Pro Football Hall of Fame.

Sayers was inducted into the Pro Football Hall of Fame in 1977. John Riggins was the first running back in Jets' history to rush for 1,000 yards in a season. Despite playing with the Jets for just five seasons, Riggins left the team as the Jets' third all time leading rusher, and still sits at number six on that list to this day. He signed a free agent contract with the Washington Redskins in 1976 and by 1978 had become the focal point of the Redskins' offense. This fact compelled him to demand a restructure of his rather low contract following the 1979 season. When the Redskins refused, Riggins effectively retired and returned to his hometown of Centralia, Kan. for the entirety of the 1980 season. Newly hired Washington Heach Coach Joe Gibbs had to travel to Centralia to beg Riggins to come back. Under Gibbs leadership, with Riggins back on the team, the Redskins formed the most powerful rushing attack in the league. In 1982 Riggins set, and still holds, a record for most rushing yards in a single NFL postseason with 610, 166 of those coming in Super Bowl XVII - itself a Super Bowl record that stood for one season until Marcus Allen broke it in 1983 against Riggins and the Redskins. In 1983 Riggins set an NFL record for most rushing TDs in a season with 24, and when he retired following the 1985 season Riggins was just the second player in NFL history to post 100 career rushing TDs.

John Riggins was inducted to the Pro Football Hall of Fame in 1992. After already establishing himself as a star safety under Kansas' coach Don Fambrough, Cromwell made the switch to quarterback under new coach Bud Moore in 1975, and promptly became the key component to one of the nation's top running attacks that knocked off #1 Oklahoma on their home field in '75 and then in '76 had Kansas in the top ten and a legit chance for a National Title before Cromwell's season was ended due to injury. The Rams wanted Cromwell for his athletic abilities and moved him back to safety where he became a perennial Pro Bowler and All Pro. Cromwell and the Rams made it to the Super Bowl in 1979. Cromwell was the 1980 NFC Defensive Player of the Year, and he would play out the rest of the '80s as one of the most feared, hard hitting safeties in the league. Rams legend and Pro Football Hall of Famer, Jack Youngblood, said of Cromwell, "Nolan was the best athlete I ever played with in 14 years in the NFL."

Though no Kansas player has gone on to be a serious impact player in the NFL since Cromwell's retirement in 1987, there have been Jayhawks who did go on to make a significant name for themselves in the league since then. 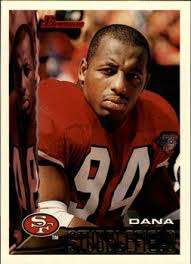 Stubblefield became an instant starter with the 49ers, earning NFC Defensive Rookie of the Year honors. He helped S.F. win its sixth Super Bowl in 1994 and was named NFL Defensive Player of the Year in 1997. 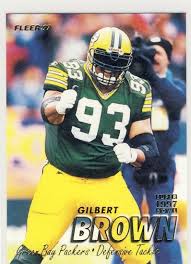 Big Gilbert quickly became a fan favorite up in Green Bay, and was a huge (literally) player in the Packers' resurgence of the mid 1990s. Brown was an immovable force in the center of that vaunted Packers' d-line, swallowing up runners and allowing Reggie White and Sean Jones to make life hell for opposing quarterbacks.

Aqib Talib and Chris Harris Jr.: Talib was a 2008 NFL Draft 1st Round selection of the Tampa Bay Buccaneers and Harris Jr. an undrafted rookie free agent signed by the Denver Broncos in 2011.

Half of the starting defensive backfield of the Kansas Jayhawks' 2007 Orange Bowl Champions, Talib and Harris Jr. have since emerged as two of the best cornerbacks in the NFL. Talib, a ball hawking corner at Kansas, has already cracked the top ten on the list of active career interception leaders. Despite going undrafted, Harris Jr. made the NFL All Rookie team in 2011 and was rated as the league's number one cornerback in 2014 by Pro Football Focus.