Our new away game 'trolling' segment -- this week, we examine our powerhouse rivals, U of T.

[Introductory Note: I am the terror that flaps in the night... I am the pin that will burst your bubble... I am the Occasional sTroll! ... And today, we will be examining the strengths and weaknesses of our opponents in a light-hearted but poignant manner. Yes, we admit that this series is based a parody of a weekly series from sister site Wide Right Natty Lite. No, we don't care. As the wise Turk once said: "Ah, you know I do what I do what I do what I do."]

So... Everyone hates Texas. While researching this post, it wasn't hard to find usable material on OU, Texas Tech, A&M, and Baylor fan sites... everyone had an article or a string of pictures making fun of Texas.

First off, I would like to thank the 'Great NationState of Texas' for inciting its masses to have giant egos and overzealous pride in their native state. Things like "Don't Mess With Texas," "Everything Is Bigger (and Better) In Texas" and "Once A Country, Always A Country" really signify how much you think you're better than everyone else. Well, guess what... you're not. Texas is -- and I know this will be a shock to you -- one of the 50 states in the United States. It was its own country, once. But that was 150+ years ago. And yes, we've all heard the "If Texas was an indepedent country, we would be the 8th largest yadayadayada..." We get it! You're proud of your countrystate. You don't have to remind everyone 24/7 where you're from. We can usually tell. 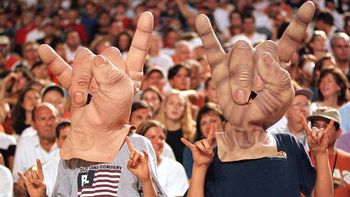 To be fair, though, your state is doing better economically than most. You can probably thank your oil production and refinery industries for that. And, even though Texans are known to be rude overzealous and in-your-face... once Texans like you and accept you as 'one of their own'... they will help you have a good time. At least, in my own experience. Texas might be in the South, but it does have a sense of Southern hospitality... sometimes. But then again, you have to if you're going to maintain your tourism industry.

Because Lawrence is only a short drive from Kansas City, we KU folks know what real barbecue tastes like. And unsurprisingly, it doesn't taste like mystery beef product covered in tomato paste. Why don't you come up to Kansas City sometime (the Kansas side, not that Missouri trash) and we'll take you to Gates or Oklahoma Joe's. Our treat!

Then again, I personally have made pilgrimages to San Antonio (which I realize is NOT Austin, thank God) to sample its world-famous Mexican eateries. So, point to Texas for superior Mexican food. You can claim that title so long as we get "Superior BBQ Capital of the World."

Your school color, mascot, and handsign // Your fans' participation and spirit 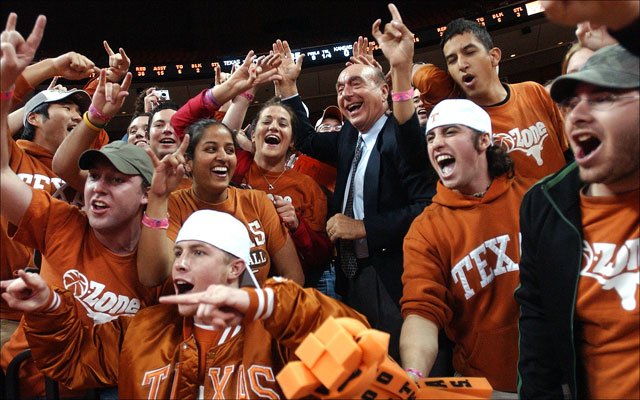 That shade of burnt orange that you call your "school color" is disgusting. Only light springs and warm autumns can look decent in it... which basically means only people with light-colored skin and light-colored hair look good in your school color. For a state with such ethnic and racial diversity, that's very limiting. Here at Kansas, we have a variety of options. Our fans can wear deep blues, medium reds, whites, blacks, grays, and -- hell, even the occasional yellow.

I suppose I cannot fault you for choosing a mascot that plays a significant role in your state's history... But you can't blame us if we don't find a longhorn, or Bevo specifically, intimidating. Granted, a flying mythical bird isn't exactly intimidating either... but at least the original Jayhawkers were.

Your "hook 'em horns" handsign is particularly ridiculous. For a team called the 'Longhorns,' why does your steer have one horn the length of an index finger and the other the length of a pinkie? ... I'm surprised its head doesn't stoop from the weight imbalance. Also, it's very close to the "Rock Out" handsign. The only thing you're missing is a tongue sticking out.

All of that being said, your university does have a very... spirited fanbase. Granted, most of that is probably thanks to the state and the university's size, but even so. Your brainwashing techniques are clearly very effective Your students, alumni, and fans are very loyal and -- dare I say it -- proud of their school. Which makes it all the sweeter when they shed tears at their losses. Congrats, on being the college sports world's equivalent of Patriot and/or Yankee fans!

Hahaha. So, apparently, your football program tried to offer Nick Saban upwards of $100 million... and he apparently declined. I guess, it's true what they say: Money can't buy everything. #RollTide

Then again, we are ones to talk. You pretty much kick our butts in football every year. But, I'm happy to say that the Jayhawk Network is available in more households nationwide than the Longhorn network. So... we have that going for us!

Your capital is messed up, Texas. No denying it. Take this from two Jayhawks who happen to live in Austin:

The traffic is the worst in the country (except maybe Houston). There is a very good reason 6th street is called "Dirty Sixth" by the locals. The city is 90% California transplants and 9% Texans and 1% other. It's the allergy capital of the world. When the Mountain Juniper trees pollinate (Dec to Feb), it's the highest air density of pollen anywhere. It impacts tons of people, even those lucky enough to not be allergic to pollen.

Get your stuff together, Austin. You probably can't do much about the allergies thing, but you can at least alleviate the traffic congestion and clean up Sixth Street. I've never been to Austin, and my impression of Sixth Street is that it's somewhere between the Vegas Strip and Bourbon Street... that's how bad / crazy it sounds.

The only upside: Austin's music scene. Even we at RCT can't trash that.

Texas, I hate to break it to you, but you are a football school. No NCAA university can be continually successful in both football and basketball for an extended period of time. Your recent success is mostly due to Coach Rick Barnes' emergence (more on him in a minute), and the fact that -- as the University of Texas -- you can draw on plenty of talented in-state recruits. Meanwhile blue-bloods like Kansas merely steal them from other states... like Texas. (We recently did that in football too, with a decent amount of success.)

Also, because you have plenty of big booster$, you have a wealth of re$ource$ to throw around and en$ure your "program'$" $uce$$. (Then, again, so do we; but we're forthcoming in being a basketball-first school, while you try to seem like it whenever the basketball team is doing well and the football team is doing poorly.) To be fair, your program has picked up several notable recruits/players in the past few years... so much so, that sometimes, even we Kansas fans are jealous. This includes, but is not limited to: Kevin Durant, Tristan Thompson, Cory Joseph, T.J. Ford*, D.J. Augustin, LaMarcus Aldridge*, and Myles Turner*.

(*- notes they are from Texas. Out of Texas' current 15 players, their roster sports 11 players who are from Texas and two more who are not, but played for a Texas high school.)

Your coach Rick Barnes. Where to start?? His face is about the same burnt orange as your school color. He looks like Bevo stretched out and made into a leather human face. He and John Boehner could start a "old white guys trying to pass for leather pumpkins" club. (Seriously, though, Barnes is a prime example of someone who does not look flattering in orange. You'll frequently find him wearing blue suits and ties because it doesn't age him as badly as orange does.)

When it comes to coaching, we have the superior one, to be sure. You never hear rumors that Bill Self is going to be fired for having a losing season and/or missing the NCAA tournament. (Not that Bill Self has allowed Kansas to do either of those things.) Bill Self has never coached his team to a first-round loss in the CBI what the heck even is that? Yes, when it comes to coaches, we have the superior one. And Rick Barnes' coaching performance (and his leathery orange face) won't let you forget that!

Now, here's the rub: Texas' basketball venue (the Frank Erwin Special Events Center) is the only Big 12 venue where KU does NOT have a winning record. Right now, Kansas and Texas are tied at six wins a piece since the Big 12 formed. Saturday's game will be the tie breaker!!! So, it's not that your venue is superior to the Phog. To be fair, nothing is. But, the Frank Erwin Center has been problematic for Kansas in recent years, and I, personally, don't see that changing any time soon.

You're perfect, just the way you are because then we get to poke fun at you endlessly.