[Author's note: As a tip-of-the-hat to our friends and colleagues at WRNL, we decided that, because both of our fanbases are very basketball-minded, we would pay an homage to your football season "Weekly Troll" articles, and point the troll gun at you for a change. Please note: it is all in good fun. May the best team win this weekend.] 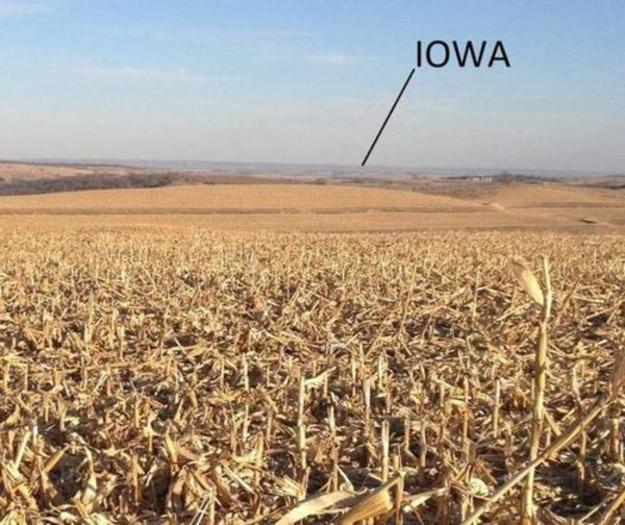 (This is a picture demonstrating the closest I ever want to be to Iowa.)

Oh, Iowa. Weirdest state in the Union. Not as hateable as Missouri, but you really don't have much going for you, either, do you? I once visited your state, and -- being the nice person that I am -- decided to buy a souvenir at a local store... so I would always remember the fun memorable enjoyable unavoidable time I spent in your state. And would you like to take a guess as to what was on this souvenir? The word "IOWA" next to -- and this is absolutely true -- a barn, a pig, and a husk of corn.

Wow. Really? Really? That's all your state has going for it?

I know you will say, "Kansas is one to talk. Your state is flatter than a pancake. At least we have HILLS!!" And, to a relative degree, you are right. But I should think that there are far more captivating and interesting things to be seen in Kansas than a barn, a pig, a husk of corn, and HILLS!! (As though, somehow, having HILLS in your state is going to save you from the apocalypse or something.)

Also, your western half of the state is like weirdly obsessed with Lewis and Clark. They have a national park named after them, where they have festivals celebrating the company's journey through the territory that is now your state. Nothing bad, but just sort of peculiar to focus on. It'd almost be like Kansas hosting festivals commemorating Coronado's trip through our state.

The only thing going for Ames is that it is only 3 hours and 55 minutes driving time from Lawrence, KS, which probably makes it the closest Big 12 school to us outside of our in-state "rivals."

A venue known for being haunted by thousands of angry ghosts unable to make any other sound than, "BOOO!" You guys should really look into that. Maybe a witch doctor or an exorcist or something? Bramlage Coliseum seems to have the same problem. You guys could form a support group for fanbases with haunted basketball arenas.

Also, Hilton Coliseum is a place where people like this guy tend to hang out. Make sure to have plenty of security on hand!

Wow, Iowa State. I should think you, being in Tornado Alley, would know better than to name your mascot after a natural disaster that has killed thousands of Americans over the course of our nation's history. That's like having the California State Wildfires, the University of Colorado Mudslides, the University of New Orleans Floods, or the Miami Hurricanes. Naming your mascot after a wind-based natural disaster doesn't make it any less traumatic. (Looking at you too, UM.) By rooting for the Cyclones, you are rooting for something that killed more than 500 Americans in 2011 alone. How insensitive of you. Why can't you pick out a mythical or vague mascot like the rest of the Big 12?

But, your actual, physical mascot is Cy the Cardinal. 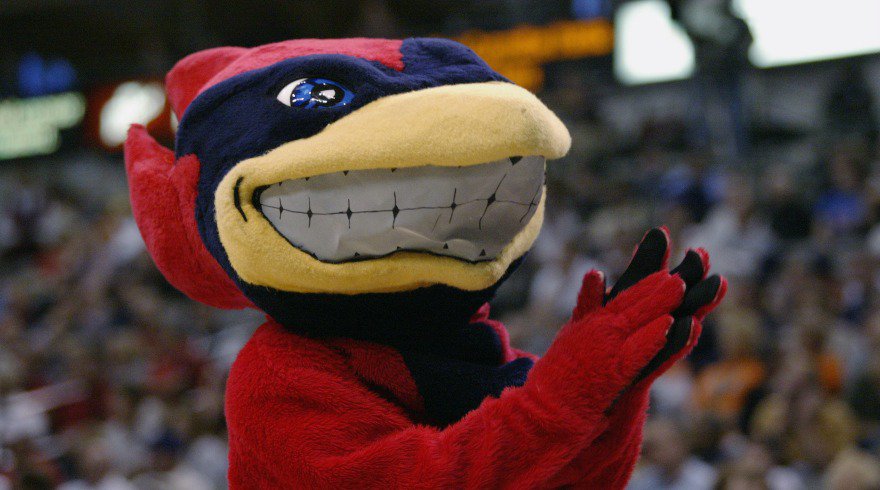 Seriously, this thing only needs some fiendish facial hair before its ready to devour your soul.

Since when is a Cyclone depicted as a cardinal? Does Cy have supernatural abilities to control wall clouds and air currents? Is Cy the Cardinal a cyclone survivor? Has Cy the Cardinal BEEN INSIDE A CYCLONE?!?!! I need answers, ISU. Answers!

Granted, our mascot is mythical, but at least its name and its appearance make sense. Jay + Hawk = Jayhawk. Cyclone + bird = angry cardinal???

So, either your mascot is original but named after a devastating natural disaster that has killed thousands of people and caused billions of dollars in property damage. Or it's unoriginal and looks kind of disturbed. You take your pick.

I actually have no particular objections to them on any reasonable, game-related grounds. But, on the other hand, Niang is kind of a douche.

Say what you will about his game, but it's like the dude wants the whole Big 12 to hate him. If he keeps this up, he could be the conference's version of Marshall Henderson, especially with Marcus Smart in the NBA.

(Also, I would like to point out how the advertisement in the background of that first gif is for IowaCorn. Like, really, you need to advertise for that??? In Iowa???) 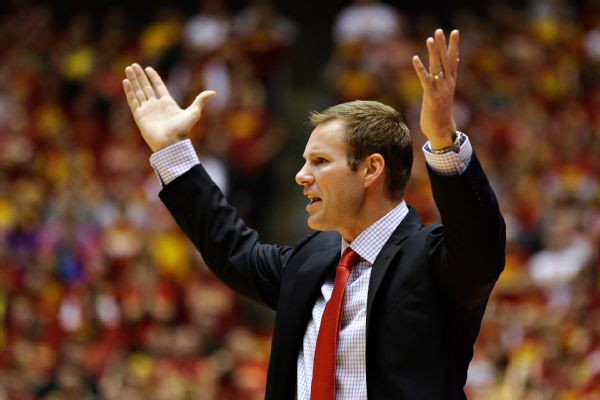 Of all the nicknames you had to work with, and you guys picked "the Mayor"???

As the RCT community probably knows well enough by now, I have nothing bad to say about Fred Hoiberg. He is a very good-lookingtalented, attractiverespectable, handsomecharismatic leader for your program to have.

His son, on the other hand, has tears that are known to cure cancer. So, you won't mind if we give him a reason to cry by attempting to obliterate his father's team and crush all his hopes and dreams of Iowa State ever winning the Big 12 regular season title, will you?

Which team will win the KU @ ISU game this weekend?