Kansas leads the Big 12 in many defensive categories after one week of college football. What else happened in the conference?

We'll make it quick and easy this week, it's Labor Day.  Most impressive/surprising performances first and we'll move in descending order until we get to the two teams who might be a little worried following the opening weekend.

With about 8 minutes left in the 2nd quarter, Florida State was up on the Cowboys 17-0.  It was looking like an ugly showing for a middle of the pack Big 12 team that would come back to haunt the conference around the time playoff teams would be announced.  And then things changed, the Pokes went 75 yards on 11 plays for their first touchdown.  They allowed FSU to gain 14 yards over the next two possessions before going into halftime only down a touchdown.  In the end, they weren't quite good enough but they turned in a hell of a performance Saturday evening after digging a hole early in the game.  Cowboys Ride for Free came away feeling pretty good about the game:

I said before the game that OSU needed three things to have a chance to win the game:

They lost/gave up all three. Think about it...take away the defensive score, OSU wins. Take away the two botched punts or the Walsh fumble, they probably beat the defending national champs. But they didn't, because you can't give up those things to really good football teams. Hell, give up those things to mediocre football teams and you're in trouble.

Oh well, that's the way it works. Squinky sucks. But this team is good enough to compete for a conference title.

For a team that was placed next to Iowa State and Kansas a lot in the preseason rankings and discussions, this was a hell of a performance.  20-17 at halftime?  Yep.  Down only a touchdown in the 4th quarter?  Yep.  Things weren't all rosy for the Mountaineers, 24 rush attempts only provided 28 yards on the ground.  Still, never saw this coming.  But things weren't near as chipper as I'd expected over the Smoking Musket.  Somewhat encouraged, yes.  Excited for what they saw? Not really and that confuses me.  We're not the only ones who thought they'd be bad.  If the team I cheered for pulled off this performance I would have been dancing in the streets.  I would have been telling the world we're not the joke anymore.  The comments here feel a little greedy for me after that performance.

The receivers (other than White) were plagued by drops once again, missing several easy catches that would have converted 3rd down attempts. Jordan Thompson did have a gorgeous grab deep in traffic to overshadow a few of his drops at least.

Defensively, the Mountaineers look to have recovered quite a bit from last year's debacle. Still, there were several egregious missed tackles on third downs that would have gotten them off the field.

And the rest of the conference played out as expected for the most part.  Oklahoma dominated Louisiana Tech, Crimson and Cream grades the offense and is pleased with about everything they saw:

Trevor Knight was much better than his debut last season, passing for 253 yards on 19/34 with a touchdown and a pick.

The defense came up with four interceptions -- with one returned 28 yards for a touchdown by resurgent senior linebacker Demarco Cobbs -- while consistently harassing North Texas quarterback Jake Greer, who went 2-for-11 passing with two interceptions. Back-up quarterback Andrew McNulty threw two more interceptions for the Mean Green, which failed to record a play from scrimmage over eight yards.

The 68 interception return yards for the Horns completely dwarfed the 15 yards passing by North Texas.

BUT and it is a big one:

The worst fears of Texas Longhorns fans this season played out again early on Monday, as head coach Charlie Strong announced that starting quarterback David Ash was suffering from concussion symptoms after the win against the North Texas Mean Green.

As a result, Ash won't play this week against BYU, the same game last season in which he sustained the hit that started his concussion problems and eventually resulted in him missing the rest of the season with the exception of the first half against Kansas State.

Not what you want going into the first test of the season against a team that embarrassed you last year.

Baylor looked good doing what Baylor does to lesser opponents:

Art Briles said at Big 12 Media Days that the defensive line would be one of the best in the country this year. He stood by his claim the rest of the preseason. Tonight, as McLane Stadium was christened and injuries mounted on the other side of the ball, the key factor was the dominance of the defensive line. 60 minutes, 9 sacks and -24 yards rushing later and Baylor has its first shutout against an FBS team since 1995.

It wasn't all good news for the Bears, as Bryce Petty and Antwan Goodley both suffered at least minor injuries.  They've got Northwestern State and Buffalo before getting to the Big XII portion of their schedule, so no immediate worries but not the best way to open the season.

TCU dominated Samford with a 48-14 win.  The fans are getting another look at Trevone Boykin this season and through week one, they were happy:

Ok, ok. So here's the deal. Boykin looked good. Great? No, but good? Yes. He missed some throws he should have made, but on the flip side, some receivers dropped some passes they should have caught. Probably the biggest drop came when Cameron Echols-Luper dropped one on his way into the endzone in the third quarter. However, you can't discredit 29-41 for 320 passing yards and 2 touchdowns.

K-State did K-State things in their 55-16 win over Stephen F. Austin.  240 yards on the ground and 238 through the air, though SFA also found a way to finish with 225 yards passing.  K-State gets another warm-up this week with Iowa State before playing Auburn.

Speaking of Iowa State, not a great opening week performance.  Yes, North Dakota State is a very good team and program.  Yes, they'd give the Jayhawks all they wanted.  However, giving up 34 unanswered points in the home opener is never a fun way to open the season.  The performance was so bad on the field, the Iowa State fans couldn't even find a way to blame the officials.  That's when you know it's bad in Ames.

For the second year in a row, Iowa State was thoroughly dismantled and embarrassed by an FCS school in their opener. To be frank; it just doesn't get any more discouraging and deflating. There's no excuse, no rationalization and sadly, no do-over button.

Most important question for Iowa State fans:  Why do we keep creating scapegoats?

At some point, you just have to stop making excuses and stop looking for scape goats and go straight to the top. This program has reached that point.

Damn.  I thought maybe they finally caught on that everything isn't the fault of the officials.  Oh well, at least now they're looking at their head man and it's not in a good way.  And Mark Mangino might have chosen the wrong place to work his way back into big time college football.  Question 4 from the link above:

Which game will be Rhodes' last?

Finally, Texas Tech.  After giving Kliff Kingsbury an extension that runs through 2020, the Red Raiders come out and pull off a courageous victory against Central Arkansas...yeah.  Probably not what the fans had in mind for the opening week. Over at Viva the Matador:

Think this is going to be a fun ride this year? Yeah, me too. I mentioned this week that Central Arkansas wasn't a bad team and Steve Campbell was a really good coach who won a ton of games at Mississippi Gulf Coast. Still, you really like to see a better showing from Texas Tech, a team that a lot of you expected to see win 9 games. With the defense just giving long and sustained drives, the expectation that the defense is going to be significantly better just isn't happening.

With two and a half minutes, Central Arkansas was within a touchdown.

So 8-5 last year.  This is the opener and he was just guaranteed 24 million dollars?  Was he going somewhere?  What's the hurry?  I just don't get it sometimes.

And one final memento from the opening week: 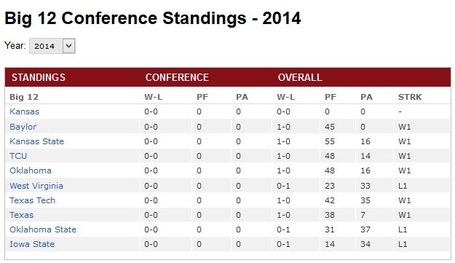