Football season is coming! Today we take a glimpse at potential two-deep depth chart rotations and project which Jayhawks may provide the biggest on the field impacts this season.

Let's say goodbye to the past. James Sims has gone to the NFL, Jake Heaps didn't make the cut in John Reagan's new system, and Darrian Miller remains a mystery after leaving the team for personal reasons. In terms of usage, KU loses the leading passer, top two rushers and three of the top six receivers from last years squad. In fact, seven of the eleven offensive players who started the final game in 2013 are no longer with the team.

On defense, the departure of Kevin Young, Jordan Tavai, Keba Agostinho (15.5 TFL and 3.0 sacks) and Dexter Linton (67 tackles and 9 passes defensed) creates vacancies within the DE and secondary rotations.

For offensive and defensive units which were in the bottom quarter of nearly every major statistical category, we can only go up from here right? 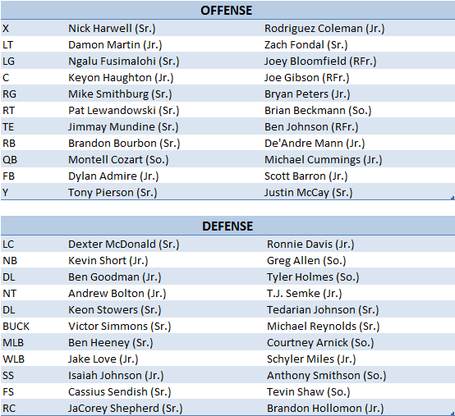 Kansas looks to start the year off strong in a run-heavy spread offense behind Montell Cozart. Cozart impressed coaches in the spring, earning the offensive MVP award and a starting job over embattled BYU transfer Jake Heaps (transferred to Miami), fellow sophomore Michael Cummings and incoming transfer T.J. Millweard (sophomore, UCLA). In 2013 Cozart completed 37 percent of his 23 passing attempts for 3.6 yards/attempt, 1.5 yards shy of the team average which was 2nd worst in FBS. If this team is to generate any momentum, no matter how well Cozart uses his legs, this trend cannot continue.

Early on the sense is that Reagan will utilize a committee with Bourbon, Mann and Cox  in concert with Cozart and Pierson in an attempt to generate confusion and create space. (Side note: I'm considering scratching this article and going with a "Nickname our Backfield" post. Ok what the hell, two birds and all, give us your best shot in the comments.) Add a little icing on the cake with four-star freshman Traevohn Wrench and the potential for a massive ground attack is there. As always this is based on getting some semblance of a passing game/pass protection.

That brings us to the offensive line, which could potentially be anchored by three seniors and a junior. Nine times out of ten that is excellent news. Welcome to that one time. Only five players on the current roster have started a game at the FBS level (an average of 7.2 starts) and most of those were for the 2013 Kansas Jayhawks. The offensive line will likely be fluid throughout camp as the coaching staff attempts to find the perfect combination while transfers/underclassmen play into larger roles (I'm looking at you, multitude of Georgia Military transfers).

Miami (OH.) transfer Nick Harwell leads a receiving group which features Pierson, a really good TE in Jimmay Mundine, and Rodriguez Coleman whose stock continues to rise. Last years starters are gone but this corps has some experience and will have an entire off season to gel with Cozart.

The defensive line returns two starters in Ben Goodman and Keon Stowers who are projected to flank Andrew Bolton at the nose. Similarly to the O-line, transfers and newcomers may emerge during camp as solid rotational players. Dave Campo (DC) must manufacture some form of a successful pass rush for the defensive unit to improve on the 66th ranked (F/+) defense from last year.

Five players saw action in all twelve games last year. Dexter McDonald, JaCorey Sheperd and Cassius Sendish provide senior leadership (24 passes defensed, 4 interceptions) and Isaiah Johnson will be a solid contributor. Behind these four depth becomes an issue. Should all four remain healthy the secondary could be a very strong unit.

If you have a transfer, newcomer, or breakout player you think we should keep an eye on, feel free to let us know in the comments.

For more on the upcoming season (and a bitter recollection of the recent past) check out Bill Connelly's thoughts on what's next for the Jayhawks and stay tuned to Rock Chalk Talk.