The Kansas Jayhawks defeated the Colonels of Eastern Kentucky Friday evening by a score of 80-69.

Share All sharing options for: Kansas Survives And Advances Against Eastern Kentucky

Kansas survived a scare from the Eastern Kentucky Colonels on Friday by a score of 80-69. KU struggled with turnovers early, enabling Eastern Kentucky to bury some early threes and go up 23-14. Kansas at one point had more turnovers (10) than field goal attempts (9), and finished the first half with 13 turnovers, including 4 from Naadir Tharpe, who really struggled most of the game.

KU slowly but surely figured out the best way to attack Eastern Kentucky inside without turning it over, but didn't begin to pull away until the last couple of minutes. EKU led this game by as late as 8:55 left in the second half. 14 of KU's 18 second half baskets were layups or dunks.

Jamari Traylor was the star of the game in this one with 17 points (on 8 shots) and 14 rebounds, including 7 offensive boards. Traylor picked one hell of a time to play the best game of his career. There's a very good chance that Kansas would have lost to a 15 seed without his efforts. Perry Ellis after the game on Traylor: "He came in and did such a great job. He gave us so much energy tonight there is no words to explain." Bill Self felt similarly. "I told our guys after, I don't know if he's had a better game. ... I think he gave us the energy."

Conner Frankamp was another bright spot for the Jayhawks. In a game where Naadir Tharpe mightily struggled and KU as a team couldn't stop turning it over, Frankamp came in and had 0 turnovers in 25 minutes, and most of his minutes came as the point guard and primary ball handler. Against the team that was 4th in the nation in forcing turnovers, that's incredibly impressive. "He's gotten better throughout the whole year and he deserves an opportunity," Self said. "I am not sure if we can win the game without him. He is a calming influence and it is probably not a coincidence when he played, I bet in the time he was out there our team may have had two or three turnovers total."

Amazingly, Frankamp has 3 turnovers on the entire season. I'll repeat that: Conner Frankamp has 3 turnovers in 202 minutes played for the Kansas Jayhawks. He had just 1 turnover in 114 minutes of Big 12 play. His assist to turnover ratio is 5.0. Granted, that means he's played 202 minutes with just 15 assists, but there is value to being able to play guard while getting shots up and never turning the ball over. I'm beginning to get the feeling that Frankamp will have a significant role if KU is going to make a run.

Andrew Wiggins didn't get a ton of touches tonight, but still finished with 19 points, increasing his total on the season to 593, which is now the Kansas freshman record. 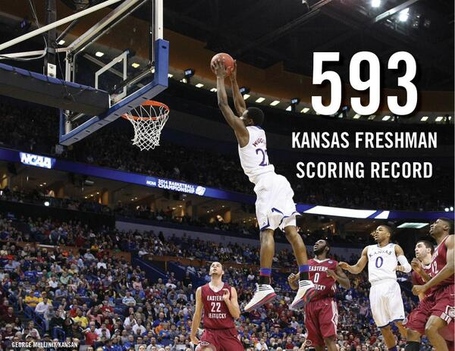 Eastern Kentucky spent much of their time and effort on defense trying to deny the ball to Wiggins whenever they could. "Our game plan was to deny him the ball coming in, make him go backdoor, try to keep the ball away from him," EKU point guard Glenn Cosey said. "I think they did a good job of drawing the lob play to get him open and get him going."

Who knows, how much more Wiggins we will get, so let's just all take a moment to enjoy some Wiggins dunk gifs, shall we?

I can almost jump that high. One more?

On a low note, this was another fairly awful performance by Naadir Tharpe. He had four early turnovers and absolutely got obliterated by Cosey, who shot 5-7 from the field for 14 points in the first half with Tharpe mostly guarding him. Tharpe played a little bit better in the second half, but for the most part was benched for Frankamp. It's getting tough to justify having him out there when he isn't scoring and is turning it over, as he just doesn't contribute anywhere else at all. Hopefully he's due for one of his ridiculously efficient nights that he seems to have every five games or so. If his play doesn't improve, Kansas might be headed home pretty soon.

Wayne Selden didn't do a whole lot offensively either. Tarik Black had a pretty nice game and Perry Ellis was solid, but I was hoping he would be able to take advantage of the smaller defense more than he did. He also lost his assignment a few times on defense, leaving a very good shooter in Tarius Johnson open.

Kansas will move on to play Stanford on Sunday in St. Louis. I anticipate watching more film on them and putting together a scouting report for Sunday morning if I have time. I will be there as I was today, and you can follow me on Twitter @TJFsports for all the updates live from St. Louis. Otherwise you'll never know how Jim Nantz orders his tea.