Big 12 Tournament: All You Need To Know

Vital information for the Big 12 Tournament that kicks off Wednesday.

Share All sharing options for: Big 12 Tournament: All You Need To Know

The Big 12 Tournament kicks off Wednesday at Sprint Center in Kansas City. Here's all the information you need to know.

Also of note is that Brent Musberger and Fran Fraschilla will be calling the title game, semi-finals, and the KU and ISU/KSU quarters.

*Estimated tipoff, based on ending of previous game.

If you've been living under a rock the past couple days, and that rock doesn't have wi-fi, Joel Embiid will not play in the Big 12 Tournament. This probably hurts KU's chances a decent amount. Get well soon, big fella.

While Ken notes that this projection does not account that well for the Embiid injury, he still argues that KU is the obvious favorite. Here are his projections for the Big 12 Tournament: 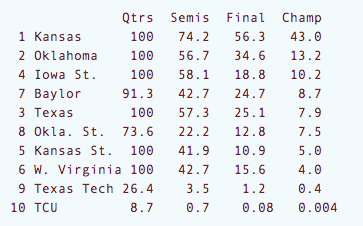 Interestingly, KU's odds have actually gotten better in Vegas to win the Big 12 Tournament since the Joel Embiid news. According to this article by the wonderful Jesse Newell, KU's odds have gone from 2/1 to 6/5.

I don't know what the best way to get tickets to this is, but there's always StubHub. Or scalping.

While it's tough to win four games in four days, I wouldn't be surprised if Oklahoma State makes a run and beats KU en route to a Big 12 Tournament Title. I think it's been noted on this site before how much better Oklahoma State is than their record, not just because they've underachieved, and not just because they have three losses without Marcus Smart, but they've actually been the third best Big 12 team in net efficiency, behind Kansas and Oklahoma. Still, I'm an optimist, so I'm gonna roll with the Jayhawks to win the Big 12 Tournament. While the Embiid injury obviously hurts, there really isn't a team that scares you with its size inside. The rim protection Embiid provided will be the biggest thing missed. The extra rest Kansas will have going into the likely matchup with the Cowboys should also help.

Yes, TCU really was that bad. Rather impressive, if you ask me. 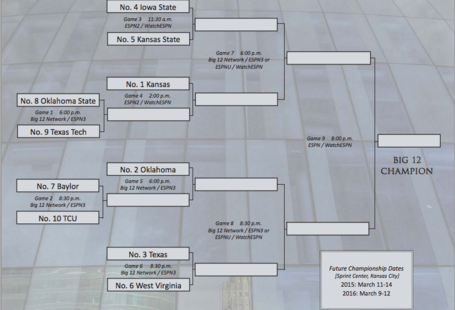