How does Kansas do with each player on/off the court?

Looking at how efficient KU is with certain players on or off the court.

Share All sharing options for: How does Kansas do with each player on/off the court?

Kansas is deep enough into its basketball season now that I thought it might be interesting to look over how the Jayhawks are doing in terms of efficiency with each player on and off the court.

First things first. All of this data is courtesy of GroupStats, which you can follow on Twitter @GroupStats. They seem to be a small group and only have this data for a few teams, but have compiled some really interesting stuff on team efficiencies for Kansas when certain players are on and off the court.

Before delving into it, it's important to realize that while this is more advanced than simple plus/minus, much of it is still heavily dependent on who these players are playing with and against, the situation, and more. Ken Pomeroy did a good job of explaining the perils of using such statistics in basketball analysis here. That said, KU has had so little "garbage time" in its games this year due to an insanely difficult schedule that the sample sizes are fairly decent, especially with the top 7 guys, and there's a tangible difference in efficiency even with certain members of the regular starting lineup are on and off the court.

Now, for the fun stuff. You can look at the spreadsheet of data for yourself here, and follow along as I take you through some of the more interesting and significant parts. Again, all of this is mostly for fun, if you're a nerd like me, and none of this should be taken as proof that one player is awesome or one player sucks. However, much of the findings in this data are points that make sense, if you've followed the team. I'll start by just going down the list of players in descending order of sample size, and how the team does with them on or off the court. 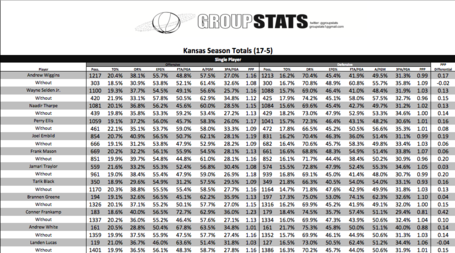 First, Andrew Wiggins. There's quite a lot of numbers that jump out at you here. For starters, Kansas outscores its opponents by .17 points per possession (herein referred to as PPP) but when he's off the court (sample of 603 total possessions) KU actually is outscored by .02 PPP. This means that KU, a 17-5 team, has been worse than its opponents when Andrew Wiggins has been off the court. It is important to consider that it's a significantly higher sample size of him being on the court than off it, but how many times this year have we seen Bill Self pull Wiggins for a seemingly quick rest and the other team goes on a run? This isn't to say that KU would be a sub-.500 team without him, but its pretty telling as to how the team has played with him on the bench this year. The defense is the main reason. KU doesn't really have a good perimeter defender outside of Wiggins, and when he's off the court, KU's defense is .10 PPP worse than when he's playing. KU opponents also get free throws about 50% more often when he's on the bench. The team also is .08 PPP better on offense with Wiggins in the game.

KU is about the same from a net efficiency standpoint with Wayne Selden on or off the court. If you've watched Selden closely this year, it probably shouldn't be a surprise that KU's offense is .04 PPP better when Selden is on the court, but KU's defense is .07 PPP worse when he is on the court. The team also shoots significantly more threes when Selden is off the court, which doesn't make any sense at all since he shoots the most threes per 40 minutes of any starter.

Perry Ellis' numbers make sense. The team efficiency doesn't change at all on defense when he is in or out, but the offense is .08 PPP better with him in the game.

The numbers for the bench players aren't that interesting for the most part. The team is worse off with almost every bench player on the court, with the exception of Tarik Black and Conner Frankamp. Black is barely a positive net differential, mostly due to the team being great on defense when he's been in the game, and Frankamp has the biggest net differential on the team. Small sample size of about 362 possessions, but KU has outscored its opponents by .42 PPP when Frankamp is in the game. By no stretch does this does mean Frankamp is KU's best player, or even its best bench player, but I do think it's interesting, and I have often believed this particular team would play better with him out on the court more often as a floor spacer for Wiggins and Embiid.

GroupStats goes on to show how certain players play together, which would be much more interesting and telling I think if it were a larger sample size to try out these lineups. Some notes of it, though:

The best frontcourt duos are Embiid/Ellis and Traylor/Black. The worst frontcourt duo by far is Traylor/Ellis. For whatever reason KU has done horribly with both Jamari Traylor and Perry Ellis in the game. KU is particularly awful on defense with that pairing in the game. I do think it's telling that Traylor and Black have such positive numbers, as it does seem that they play very well together and have good chemistry as KU's second big man unit. It is by far KU's most physical unit, and they seemed to fair pretty well down the stretch in the Texas game also. Another note is that Wiggins at the 4 has hardly been tried, but the very small sample size that it has does have good numbers.

Of the four most common backcourt combinations, the best has been Tharpe/Selden/Wiggins and the worst has been Tharpe/Mason/Selden. I actually am really interested to see how PG/SG combos have been, as there's probably a much bigger sample size on those and is probably more relevant. I have been in touch with the people that put this data together, and they might have that data available eventually.

For whatever it is worth, the best 5-man lineup (of the five most common lineups) has been Tharpe/Mason/Wiggins/Ellis/Embiid. I'm still not sure if Tharpe and Mason on the court at the same time is that ideal, but with Tharpe's recent shooting prowess it might not be that bad, and the numbers seem to think it works pretty well.

Huge shout-out to GroupStats for supplying this data, and this link to the spreadsheet has been constantly updated throughout the season, so feel free to bookmark it and revisit as the year progresses. Once again, you can follow them on Twitter @GroupStats.

Let me know what you guys think in the comments. Are there substantial findings in this data? Is it mostly meaningless in the world of small sample sizes? Should Conner Frankamp get more playing time? Should Bill Self stop using the frontcourt pairing of Ellis/Traylor? Also be sure to let us know in the comments if you found any interesting parts of the data that I did not include, and let me know if there are any questions you might have.

I'll have the Statistical Scouting Report for the West Virginia game up tomorrow. Again, you can follow me on Twitter @TJFsports