Previewing Tuesday's matchup in Waco against the Baylor Bears.

Share All sharing options for: Kansas vs. Baylor: A Statistical Scouting Report

The Kansas Jayhawks will look to bounce back from a brutal loss to the Texas Longhorns and go 8-1 in Big 12 play on Tuesday night as they travel to Waco, Texas to take on the Baylor Bears. In this post I will attempt to look over all of the numbers for the disappointing Baylor team and tell you all of the ones that are interesting or of note, as well as go over the box score from the previous Kansas/Baylor game.

Baylor is 14-7 on the season, but just 2-6 in Big 12 play. Yikes. That puts them only ahead of TCU in the conference standings. Kenpom ranks the Bears 54th in the nation, with the 50th best offense and the 77th best defense.

Kansas defeated Baylor in the first matchup between the two teams in Allen Fieldhouse by a score of 78 to 68.

In terms of team statistics, not a whole lot jumps out at you. They're fairly mediocre to average in just about every team statistical category, with the exception of 3-point percentage. At 40.1%, Baylor ranks 17th in the nation in shooting from deep. The biggest part of that is 6'2 guard Brady Heslip (#5). 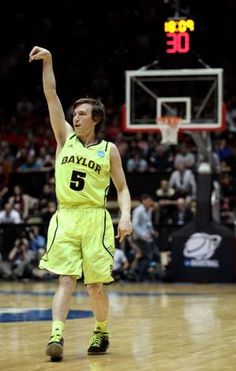 It's gotta be the hair, Cotton, it's beautiful! Feathered and lethal, you just don't see it nowadays!

Anyway, the good news is that Heslip only really does one thing. The bad news is that he does it really, really well. Heslip shoots over a third of Baylor's threes and he shoots a ridiculously good 47.3% on them. Heslip torched KU in the first game, shooting 6 of 9 from deep in Lawrence. Frank Mason likely will be guarding Heslip a significant portion of the time on Tuesday, and it will be an important matchup to watch. Baylor as a team shot 13 of 27 for 48.1% on threes in the first matchup, which is very serious problem. Honestly, it's amazing Baylor only scored 68 points in the first game. Kansas will need to tighten things up on the perimeter on Tuesday. 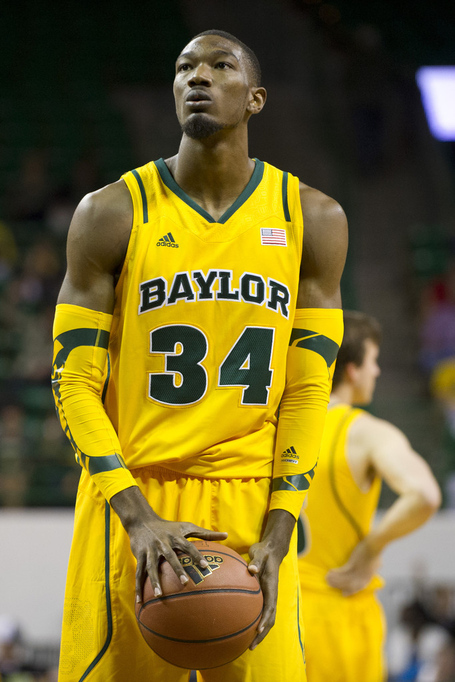 For the season, 6'9 forward Cory Jefferson (#34) has arguably been Baylor's best player, posting a 23.0 Player Efficiency Rating (PER) and a team-high 2.6 win shares, scoring 12.5 points per game on 54.5 eFG%, along with 8.4 rebounds and 1.5 blocks. Jefferson's numbers have dipped in conference play, but he is still a very solid power forward and a physical force to be concerned with. Perry Ellis and Jamari Traylor will likely be guarding him most of the time, and will be another interesting test to see how Ellis does guarding a very physical player. In the first matchup, Jefferson scored 16 points on 6/10 shooting, along with 2/2 from three. Jefferson shoots less than one 3PA per game, but might be something to keep an eye on if he is interested in bringing KU's bigs out of the paint, as he has shot 7 of 18 from deep on the season. He does shoot decently on 2-point jumpers at 40.3%, and they are 43.0% of his total shot attempts.

A third player to watch is the ridiculously long and lanky 7'1 center Isaiah Austin (#21) on Tuesday. 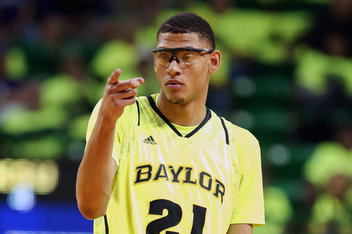 NBA scouts and executives have cooled significantly on Austin since coming out of high school. He is obviously gigantic from a height and length standpoint, but doesn't have a ton of strength and isn't a very strong finisher or rebounder. Austin scores 12.5 points per game on a 54.5 eFG%, with a very pedestrian 12.5 total rebounding percentage. By comparison, Baylor 6'8 forward Rico Gathers (#2) has a 22.6 TRB%, despite being 3 inches shorter. Via Hoop-Math, Austin shoots 29.7% on two-point jumpers, which is a problem when you consider that those are 41.8% of his total shot attempts. The thing to watch here is if Austin can make his jumpers to effectively bring Joel Embiid out of the paint. He was able to do this in the first matchup, connecting on 4 of 8 three point attempts. This seemed to be a point of emphasis to impact Embiid, as Austin usually only shoots about 1.1 threes a game.

In terms of individual performances for Kansas in the last matchup, it was mostly Perry Ellis and Andrew Wiggins on offense. Ellis had 18 points on 8 shots, and Wiggins had 17 points on 7 shots. Frank Mason also had a really nice game off the bench, scoring 9 points on 4/5 shooting, with 6 assists and 1 turnover.

Kansas will look to get the bad taste from the Texas game out of its mouth on Tuesday. The game will be on ESPN 2 at 6:00 PM Central.