What's the Matter with Kansas' Defense?

The defense of the Kansas Jayhawks has not been as elite as recent KU teams. Why?

Share All sharing options for: What's the Matter with Kansas' Defense?

For as long as Bill Self has been the head coach at Kansas, the Jayhawks have been known as a defensive team. Shooting might come and go, but KU would hang its hat on not letting the opposing team score. Self teams have had remarkable consistency in the ability to put the clamps on defensively, no matter who the players are. Since the 2005-2006 season, KU has been in the top 11 in Kenpom adjusted defensive efficiency, finishing in the top 5 more often than not.

Putting together an entirely new team after the senior class of Wayne Simien, Aaron Miles and Keith Langford departed? No problem. Brandon Rush, Mario Chalmers and others stepped in to make KU a top 3 defense. That core went on to have the top overall defense the next two years, culminating in an Elite Eight and a National Championship. KU reloaded again, assembling a team of young players to pair with Sherron Collins and Cole Aldrich in 2008-2009, but they still were able to have a top 10 defense. The Final Four team of 2011-2012 again had a top 3 defense, and last year's Sweet Sixteen Jayhawks had a top 5 defense. So though we all knew Kansas would be extremely young this year (mostly playing three freshmen and a sophomore in the starting lineup), many took for granted that Bill Self would be able to make this particular group of young athletes a top-notch defensive unit. This has not been the case.

Going into this weekend's games, Kansas has the 35th ranked adjusted defensive efficiency on Kenpom. To be clear, this number takes into consideration the fact that KU has played by far the toughest schedule in the nation and faced the best offensive teams overall. If you were to take the numbers as they are, independent of the opponents, KU allows 100.9 points per 100 possessions, which translates to a national rank of 110th. Yikes. For comparison's sake, the 2011-2012 Kansas team that lost to Kentucky in the National Championship also had the toughest strength of schedule, but they allowed just 91.3 points per 100 possessions.

So here's the key question, the one that is somewhat difficult to answer: Why isn't KU's defense better? They have fantastic athletes on the perimeter in Andrew Wiggins and Wayne Selden. They have a gigantic rim protector in the form of behemoth Joel Embiid, the possible number 1 pick in the NBA draft. They have experienced veterans in Tarik Black and Naadir Tharpe. Most importantly, they have a coach with the highest defensive pedigree possible. What's missing?

I'll attempt to answer this question by utilizing numbers, as well as several screenshots of the game versus Texas Tech (No, seriously, there are a lot of screenshots, so beware). Although the final score was in the low 60's, it was an incredibly low possession game, and KU's defense actually was fairly mediocre in it, allowing the Red Raiders to shoot 47.1% from the field and 50.0% from three.

The most significant problem is the backcourt. While Andrew Wiggins has been fantastic on defense, he's really the only guard on the team that is even halfway decent on this end of the floor. This is highlighted by the fact that with Wiggins on the bench, Kanas allows about 10 more points per 100 possessions. Naadir Tharpe and Wayne Selden in particular have been fairly awful, and they're playing the majority of the minutes.

First, KU isn't forcing enough turnovers. Kansas ranks 286th nationally in forced turnover percentage, including the bottom half (6th) of the Big 12 in conference play. While this can be attributed to many things, what stood out to me is that sometimes Kansas does not pressure the ball at all. They don't use a full-court press very often (which might not be a bad idea to do more of considering this issue), they don't strip the ball very much and they don't do a good job of contesting passes. 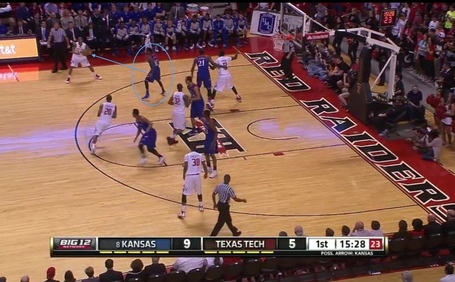 Note how much room the offensive player has to work with. Tharpe is not making it difficult at all, standing 6 feet away without his hands up, without being ready to contest a pass. This isn't a huge issue on its own, on an individual play, but this is something basic that KU has not done a great job of this year. Make it more difficult for the passer, or he can give it to one of his teammates in a good spot to score.

This same problem is present in the next play as well. 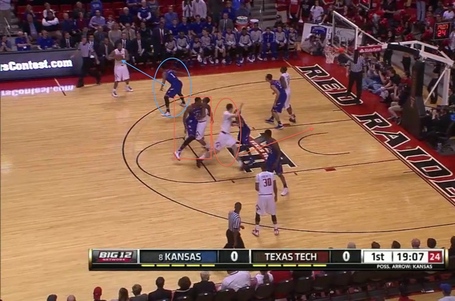 While Selden is a bit closer to the ball on this play than Tharpe was, notice how again the offensive player has plenty of room to make a pass. This becomes a problem on this play, as Tharpe's man sets a screen at the free throw line on Embiid, freeing Embiid's man to cut to the basket. Tharpe should switch, try to contest, foul, or do something. 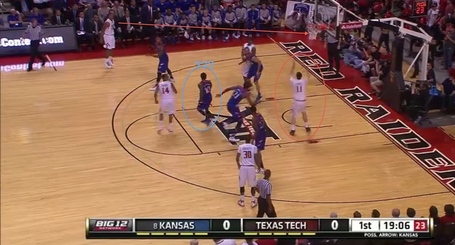 Not pressuring the ball is also a problem in denying post entries. Kansas often just doesn't making it difficult to complete it. 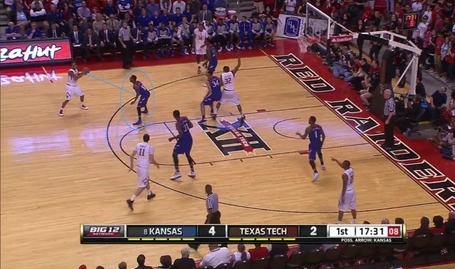 This is a play we have seen KU convert on the other end many, many times. not much pressure on the ball, an easy lob pass over the top. Fortunately, Tech did not elect to make the pass on this play. Moving on. 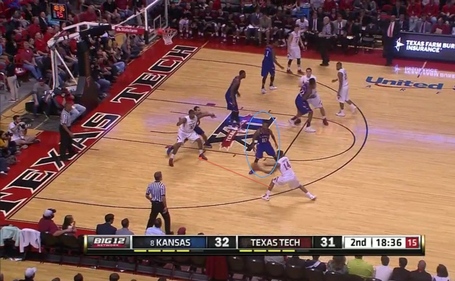 Once again, Tharpe just sort of stands there. He doesn't make it difficult on the passer at all. It wouldn't require a ton of effort to put the hands up, or get in the face of the offensive player that picked up his dribble. Again, a minor problem on it's own, but an example of something that could be better and another example of why more turnovers aren't being forced.

Another problem that Kansas has encountered is poor awareness and deciding when to bring a double team. This often results in over helping, freeing up an easy basket. 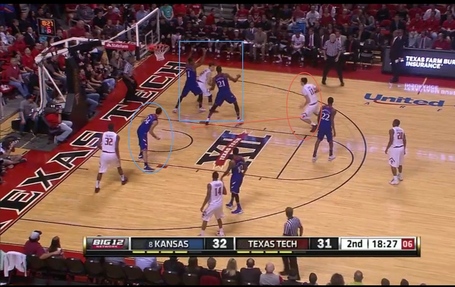 This is on the same possession as the previous image. Selden actually does a nice job preventing a baseline drive on this play, something he usually isn't great at. He forces the defender to pick up his dribble. Embiid decides that this is a good time to trap, freeing up his man to cut to the basket. While Embiid probably should not have trapped on this play, Ellis needs to rotate over to stop the cut. He doesn't in time, leading to an easy bucket.

Going back to the problem of screens. KU has had a trouble with them all season, most notably during the loss to K-State in Manhattan. The Texas Tech game was no exception. 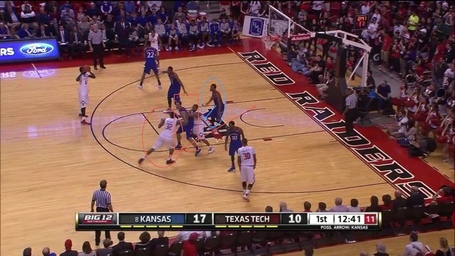 Selden's man comes up to set a screen on Ellis. At this point in the play, Selden needs to recognize it and switch to Ellis' man. 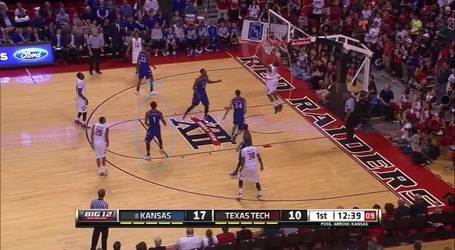 Unfortunately, he does not. Very similarly to the earlier play with Tharpe, Selden does not recognize the screen, leading to an easy bucket for Texas Tech.

Another problem that KU has fallen victim to is ball-watching. 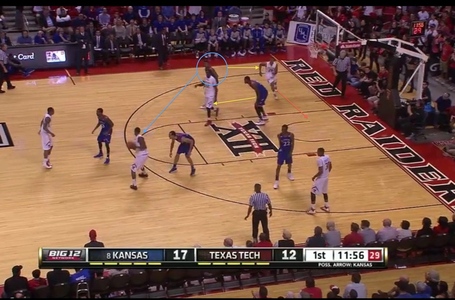 Pretty basic, but Selden gets caught watching the ballhandler on this play and not paying attention to his man. This screenshot might actually make it look like it's Embiid's man, but it was Selden's. He just got caught watching for a couple seconds. The offensive player cuts fairly easily and gets the pass for an easy layup. The problem is not just Selden's though. 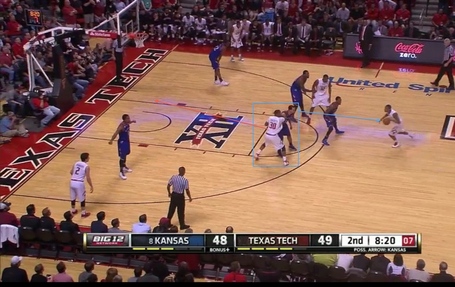 Ellis is sort of ball-watching here, thinking that Jaye Crockett is about to set a screen. Crocket realizes that Ellis is overplaying and immediately cuts to the hoop. 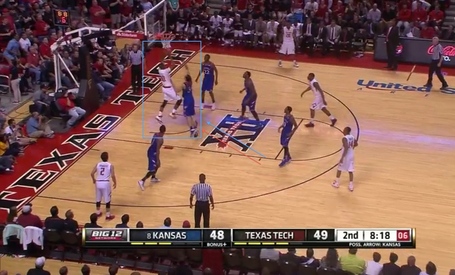 Crockett cuts, gets the pass, and Ellis is able to rush back quick enough to foul him, at least.

Next, however, is probably KU's biggest problem. KU is rather awful at defending dribble penetration. This once again is mostly due to Tharpe and Selden. I don't mean to crush them, but a lot of the defensive problems circle back around to them. Because both of them frequently allow drives, KU frequently must have perfect rotations to defend the play properly. Since we all know KU is rather inexperienced, this is usually not what happens. 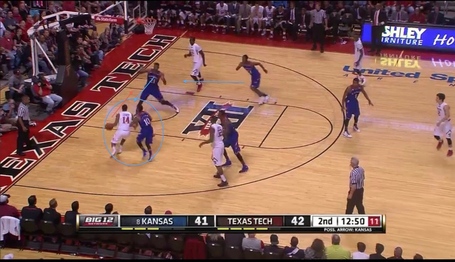 Here, Tharpe allows the drive of Robert Turner rather easily. Embiid sees it and is forced to step up. After that, rotating over to "help the helper" is where KU usually struggles a bit. 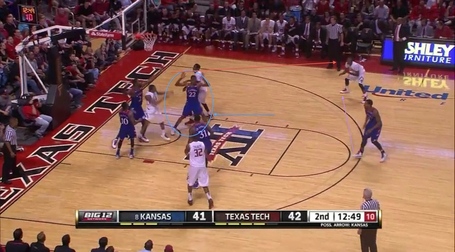 Fortunately, Wiggins is there in plenty of time due to his high basketball IQ (his rotations and defensive awareness have been remarkably better than the rest of the team) and stops the driver from dumping it off to Embiid's man. This is where the driver kicks it out to the three point shooter, and Selden needs to rotate to contest the shot. 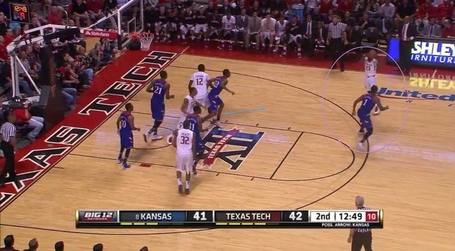 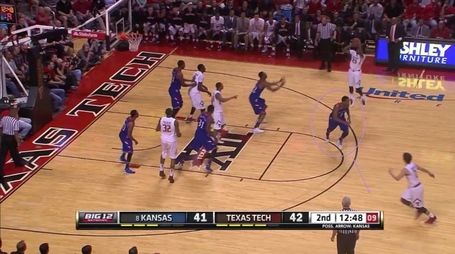 Selden however then immediately decides at the last second to turn around, not contest the shot, and rotate back to his original man. This was another poor read, leading to the shooter getting, and hitting, an open three.

Again, all begun by the poor defense on dribble penetration that started less than 3 seconds prior. KU is forced to be perfect on rotations when they allow drives with such regularity, and this is rather difficult for such a young team. It is especially apparent when Embiid is not playing at his optimal level, since there is no rim protection without him. As a result, KU is forced to foul. Kansas is dead last in the Big 12 in limiting free throw attempts per shot attempt (again very weird, since the refs obviously love KU), and are 279th in this category nationally.

These are just some of KU's many defensive problems illustrated by examples of just one game.

But hey, who am I to be a bummer? Let's end on a few positive notes and snark! 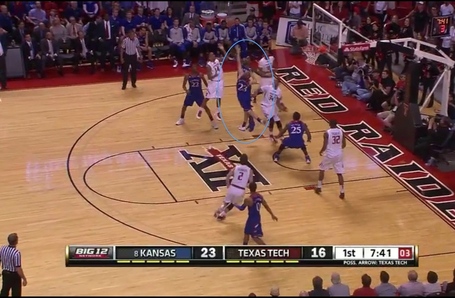 LOOK AT HOW GRACEFUL CONNER FRANKAMP IS. Beautiful, elegant (This actually was a pretty good defensive play). 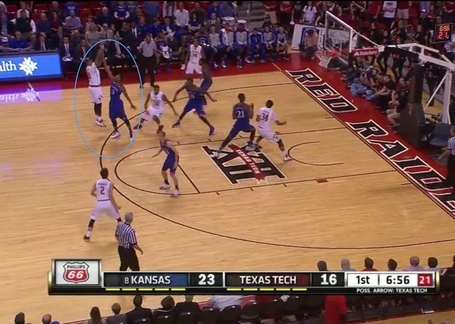 Andrew White III actually got some first half minutes when Wiggins got his second foul and look at that! A KU perimeter defender not named Wiggins getting in the face of someone! 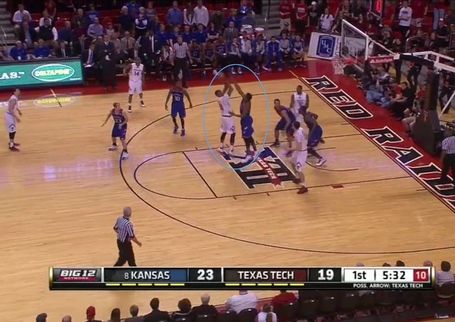 And again! Crazy, maybe he should play or something.

Let's end on an awesome Wiggins block, shall we? 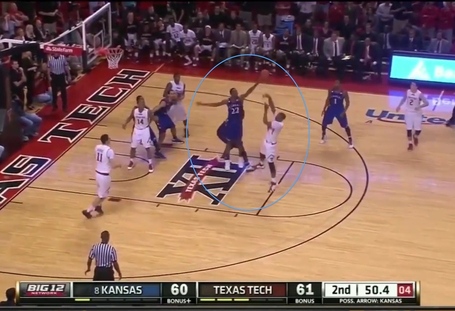 Anyway, these were some of my observations on why Kansas is struggling on defense. Let me know in the comments if you have any comments, questions, or observations of your own. Again, you can always follow me on Twitter @TJFsports.