Observations from the thriller in Manhattan.

Oof. That one hurt. Kansas lost to in-state rival Kansas State in overtime on Monday night by a final score of 85 to 82. Here are 5 observations:

1. Joel Embiid was not himself.

One of the biggest takeaways from the game is clearly the status of center Joel Embiid. Once again, Embiid did not look like his usual dominant self, finishing with 6 points, 6 rebounds and 1 assist in 18 minutes. He also shot 2 of 5 and had 2 turnovers. Bill Self was quoted for pulling Embiid in the first half for playing "fragile" in the first half, not liking his demeanor on the court. Self didn't play him much in the second half either, and Embiid struggled when he did play. After the game, Self said Embiid was banged up, presumably some combination of the knee tweak from the TCU game and the back tweak from the West Virginia game. I had a feeling that Embiid was due for a bit of a coming back down to earth, but this stretch is a bit more worrisome than that, particularly if injuries are the reason why. Let's hope he takes the necessary amount of time off, comes back 100%, and the team does fine without him. When Embiid is not playing well and back there to protect the rim, KU has a serious problem on its hands, which leads me to the next observation...

K-State absolutely gouged Kansas on pick and rolls Monday night, particularly late in the game and in overtime. Credit to Bruce Weber, who I thought coached a fantastic game, for finding and exposing a weakness in KU's defense. Before re-watching, it felt like Weber was intentionally trying to put two of KU's worst defenders, Naadir Tharpe and Perry Ellis, in several P&R situations. This led to several meltdowns primarily due to over-switching on ball screens and K-State subsequently dumping it off to one of their bigs for many easy buckets. Courtesy of the great Jesse Newell , this is K-State's shot chart for the second half: 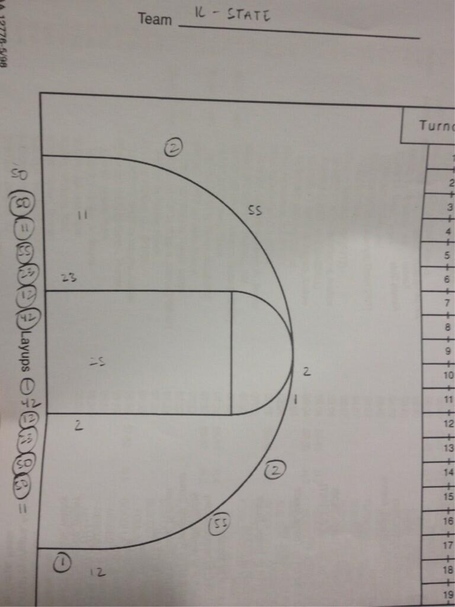 This means that K-State attempted 14 layups or dunks in the second half, converting 11 of them. That's a problem, and not one that Bill Self will be too happy with. More than just pick and rolls, though, K-State simply threw an enormous amount of ball screens at KU in nearly every offensive set, and KU did not respond well. K-State also seemed particularly concerned with screening Andrew Wiggins several times to free up Marcus Foster, which is a pretty intelligent move considering that every single one of KU's perimeter defenders outside of Wiggins is pretty easy to beat off the dribble. This particular issue is highlighted when KU's rim protector is either not playing well or is not playing. While this another problem, for another post, on another day, KU's inability to prevent dribble penetration is a very glaring weakness on this Kansas team that might get exposed in March.

3. KU showed great fight to get back into the game late in regulation.

This game was over. This game was arguably more over than the 2008 National Championship game against Memphis was over. With 1:53 to go in regulation, Wesley Iwandu made two free throws to expand the lead to 9 at 68-59. Then Wiggins drove and made a layup, K-State made a huge mistake in trying to throw the ball in and down the court quickly. Perry Ellis hustled back and contested a missed layup. Brannen Greene then got a putback dunk off a Tharpe miss, and the lead was 5. K-State inbounded to Shane Southwell, who was trapped by Wiggins and Greene, forcing a turnover and a Greene layup, cutting the lead to 3. K-State ran the clock and missed on a Foster jumper, and KU had a chance to tie, but missed on a Wiggins three. Iwandu made one of two at the line, Tharpe got a quick two, Iwandu missed again from the line, and KU unbelivably had a chance to tie with a two. With 7 seconds left, Wiggins drove down the lane, barely missed a hanging floater but got his own miss on a ridiculous second bounce and converted. Here's the GIF of that play, courtesy of CJ Fogler. He then forced a turnover on the other end, and the game headed to overtime. This would be one of the more memorable comebacks of the Bill Self era if KU had not been outplayed by K-State in the overtime period.

This was a bummer for me. While it should always be provided with the caveat that his defense is a problem, Selden has been really productive for KU on offense for most of the games in conference play. This was not the case on Monday night. Selden had just 2 points in 28 minutes on 1 of 6 shooting. He also didn't get to the line and had two turnovers. Because he is one of KU's worst defenders, it can be pretty crippling for KU if he has a bad offensive game. This led to Brannen Greene (FREE ANDREW WHITE) getting 15 minutes of playing time, and while he isn't a good defender either, he played pretty well, in particular helping to spark the comeback at the end of regulation. Hopefully Selden can get back on track Saurday against TCU.

Tarik Black's contribution off the bench helped mitigate Embiid's ineffectiveness to a certain extent. Black provided 8 points on 4 of 7 shooting, with 7 rebounds, 1 block, 0 turnovers and just 1 foul (!!!). Self's confidence in Black appears to be growing after his rough start with KU, and I must say he has given KU a physical presence at times when they have desperately needed him. It seems likely that he will have an important part to play in this season, when it's all said and done. I can see Black being very important if KU runs into a physical team in the NCAA Tournament. Let me know what you guys think, share your own observations. You of course can follow me on Twitter @TJFsports.