Taking a look at one part of the offensive failure of the Jayhawks in the loss to San Diego State.

After watching the game again, my feelings about Sunday have changed a little bit.  During the game and immediately after it, I wasn't happy but also convinced myself it didn't really matter.  Conference play is about to begin and anything that happens before it is largely inconsequential in college basketball.  Sure, fans want to see dominance.  We want to see wins and get upset when the team plays poorly but what actually happens has very little impact on the rest of the season.  The Jayhawks can still win their 10th straight Big 12 championship.  The tournament is still going to be there at the end.  In a way, the non-conference portion of the schedule is glorified practice for a program like Kansas.

At least that's what I have to tell myself after my favorite team loses four games in the first half of the season.  The loss yesterday was the result of poor shooting from almost everyone, some mental lapses on defense, and extremely poor execution against double teams San Diego State threw at the bigs throughout the game.  To be honest, rewatching makes me feel a little better heading into conference play.  How does losing make me feel better?  Because the loss exposed a big flaw in how the team handled the double teams and it's better for that flaw to be exposed against a non-conference opponent than having it happen during Big 12 play.

Below I've taken several images from the game to highlight just how poorly Kansas handled the double teams thrown at them all day.  Anytime the ball went to the post, San Diego State brought another defender.  This helped to push the offense outside the lane and force the Jayhawks to create their own shots more than they like. 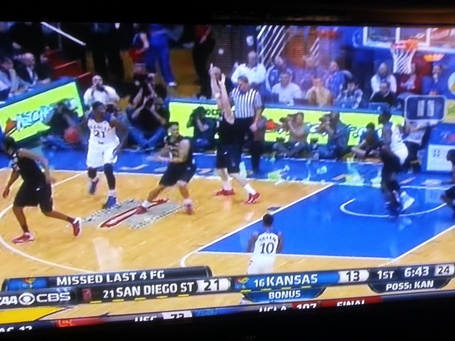 On this play, a few things stick out.  Embiid had to retreat with the ball, Tharpe's wide open, and Mason's wide open on the opposite wing.  Embiid passes to a wide open Mason. 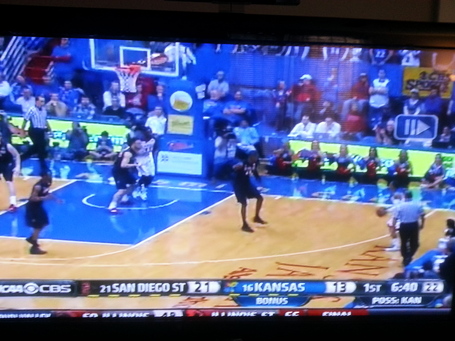 This is one of the few times the double team was handled well.  Tharpe was in perfect position at the top of the key and Mason was open on the weak side of the court.  The only problem came when Mason didn't take the shot after receiving the pass.  If a team can double team at will and not get punished when the ball is kicked out, they're going to keep doing it.  This is a shot Mason has to take.

Unfortunately, the clip below is what happened way too often when the Aztecs doubled down low. 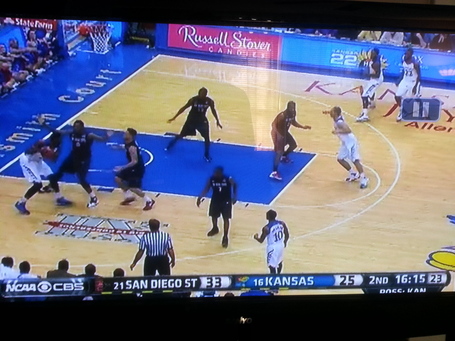 Where's Embiid supposed to go with this one?  Two guards side by side on the weak side and Ellis passively cutting to the basket.  If this happened once, it'd be understandable.  When it happens repeatedly, it's very troubling. 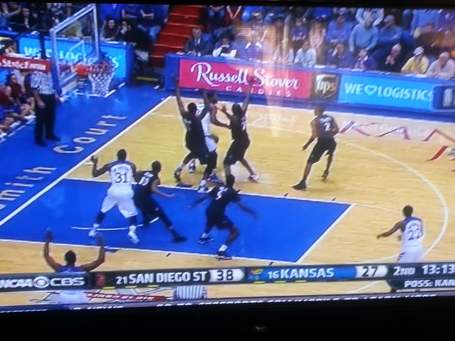 This time Black had the ball and is doubled while Selden raises his arms and stands flat-footed.  Wiggins also turns into a spectator.  Taking a few steps towards the top of the key opens a passing lane and provides spacing between him and Selden.  Tharpe is also stuck watching right line with the guy guarding him, sliding down towards the baseline just a few steps opens the passing lane for Black to kick it right back out and gives the offense a chance to reset. Unfortunately, Black tries to force it to Wiggins over the top and the pass is intercepted. 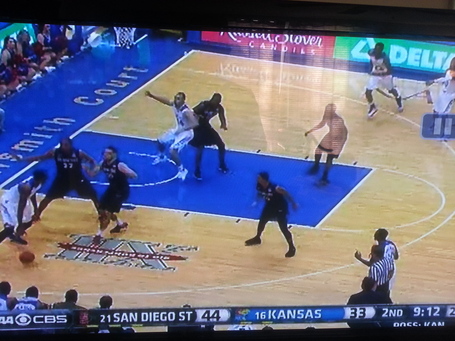 Another double with Embiid pushed way off the lane and two Jayhawks on the weak side wing.  Wiggins is just now cutting to the middle but it's too late and Mason hasn't moved towards the top of the key.  Embiid tries to throw over the top again leading to a steal for the Aztecs. 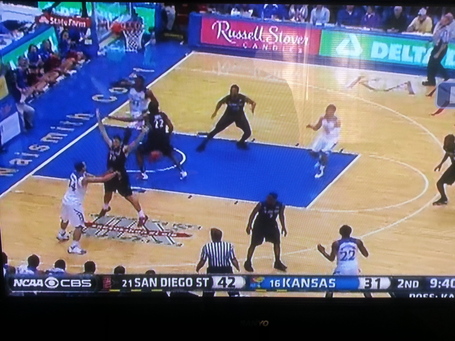 Here we see Mason do exactly what needs to happen.  Ellis had just dribbled out of the double team and as the defense is recovering, Mason flashes to the middle.  Wide open looks leads a basket for Mason.

Obviously the double teams weren't handled well yesterday and that's understandable for a couple reasons. First, young teams are still figuring out the offense and each other.  Recognizing the situation and moving instinctively instead of passively watching takes time to learn.  Second, San Diego State is a big team which makes the passes harder to make.  That makes this strategy work a lot better for them than teams that aren't as long.  Now that it's been exposed, expect to see it happen against us but I also expect for Kansas to handle it a lot better in the future.