This topic has been bothering me lately, and when ranting on Twitter wasn't quite enough, I decided to compose a more elaborate discussion on it in the form of a Fanpost.

Andrew Wiggins is obviously a phenomenal talent. He often was described as the best high school prospect since some guy named LeBron James, was a YouTube sensation with absurd highlight reels and mix tapes of dunking on any defender that was silly enough to get in his way. Many of us followed his recruitment closely as it winded down, with an occasional whisper that maybe Kansas really had a shot. I still remember being ecstatic when I got out of my Spring semester final exam and turning on my phone to dozens of mobile alerts and text messages about the news of him choosing to play at the University of Kansas and become a Jayhawk.

I would first like to highlight how absurd it is that most are only talking about him in this light. The simple case for that is this: He is 18 years old (born in 1995, if you want to feel old), and is both the leading scorer and best defender on a a projected 1 seed in the NCAA Tournament. He has been both those things while playing on the team that has had by far the toughest schedule in the nation. So on the surface, I'd say he's doing pretty damn well.

But the crux of the argument is considerably more compelling, if you pay close attention to it: he's in an absolutely terrible offensive scheme for his skill set.

Let me preface the next part by saying that as a lifelong Jayhawk fan, I adore Bill Self, and will be devastated if and when he leaves. I think he is in the discussion for best coach in the country, and overall is terrific. Furthermore, this is more analyzing the perceived struggles of Wiggins than it is crushing Self.

Anyone that has spent any small amount of time watching Wiggins knows his biggest offensive strength: he's an absolute freak athlete with absurd length and leaping ability. He can go from the 3-point line to the rim in two long, quick, explosive strides in a way I'm not sure I've seen before. To say the very least, Kansas' offense severely hinders his capacity to showcase his abilities and talents.

Most of the time, when Wiggins gets the ball in a half-court offense, he has three options: First, he can pass the ball, which in Self's offense means usually grabbing the ball on the wing and dumping it inside to either Perry Ellis or Joel Embiid. He actually does a pretty good job of this, as Wiggins understands the offense and does a good job of getting the ball where it is supposed to be and is one of KU's better entry passers.

Second, he can shoot a jump shot of some variation. He has done plenty of catch and shoots, coupled with a surprisingly effective step-back jumper. The problem with this option is at this point in his career, Wiggins has been very streaky with his jumper. Sometimes, like at the end of the Florida game, where he buried four consecutive deep three point attempts, it seems like he cant miss. At other times, he can't seem to buy one and is often long on the shot. The form on his jumper is pretty solid and smooth though, and is likely to be improved over time at the next level.

Thirdly, and this is the biggest issue, his only other option is to drive into traffic. Because of the spacing of Self's offense, this is most of the time not ideal. Because Self almost never calls pick and rolls or isolations/clear-outs, there is usually always a post and his defender in front of him. Meaning that even if he takes his defender off the dribble, which he has shown more often than not is not a problem, he is almost always driving right into heavy traffic in the lane. Defenders can easily collapse and make shots difficult or poke the ball loose. 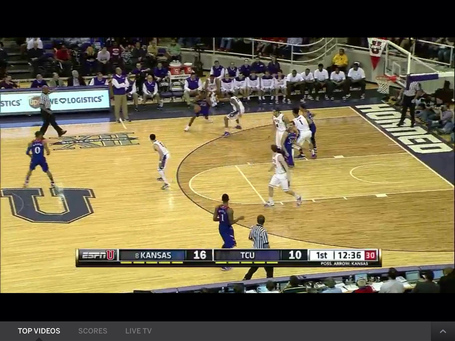 This is how the offense is usually spread out: Point guard up top, with the two wings on, well, the wings. Pretty basic stuff, and has worked for Self wonderfully for decades, including this year. The problem though, is that there is no room for Wiggins to operate. Wiggins beats his man fairly easily on this play, and if not for the extra congestion in the lane, it is likely he would have had a layup or a dunk, or at the very least freed up an easy basket for a teammate. Instead, he has to stop well short of the rim and pull up for a nice mid-range jumper. 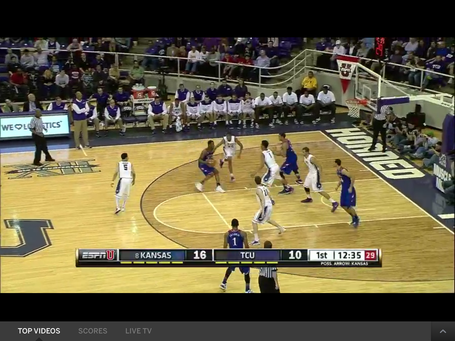 Which, by the way, he makes, and was one of the many nice jumpers he converted en route to a monster first half at TCU, going 6 for 8 from the field for 19 points. But notice all the defenders immediately around him, yet no one is really open. Poor spacing, and far from ideal for Wiggins.

Next is a slightly different play, but another example of how Wiggins needs to constantly drive through multiple defenders to get to the rim. 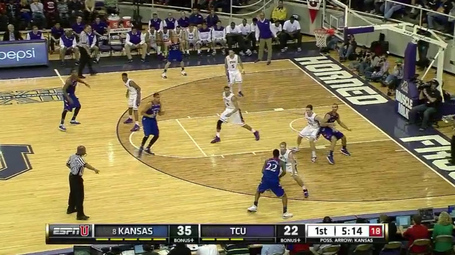 I'm not quite sure what Landen is doing on this play, but it's at least some semblance of a bit better spacing. Unfortunately, he obviously has no jumper to be respected and his man is obviously more concerned about Wiggins. Coupled with Perry posting up, Wiggins can either pass to Perry or drive between a triangle of defenders. If the Jeff Goodman's of the world wouldn't complain about his lack of assertiveness, maybe he makes that pass. 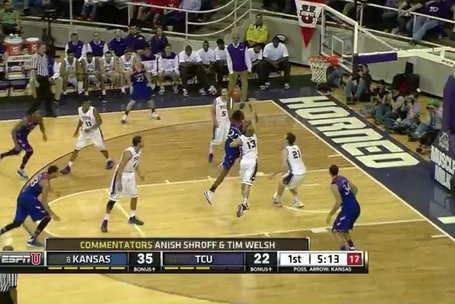 Instead, he drives, and somehow, he gets to this spot in two steps, slices through three defenders, and gets fouled on a lefty scoop shot.

The next play is just a funny example of quite possibly the worst spacing I've ever seen on a Wiggins baseline drive. 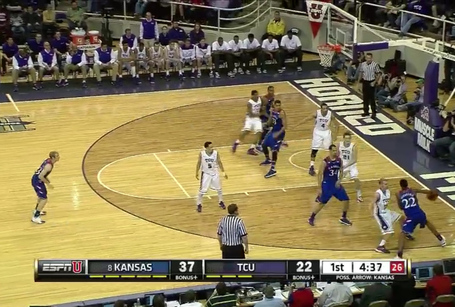 So many questions about this play. Is Perry trying to set a pick? Does Landen have any idea what is going on? Did Selden really think that was the right time to cut? Somehow, someway, this ended up in a Frankamp made three-pointer, who actually tremendously helps the spacing when he is paired with Wiggins, and that's something I would like to see more of going forward. 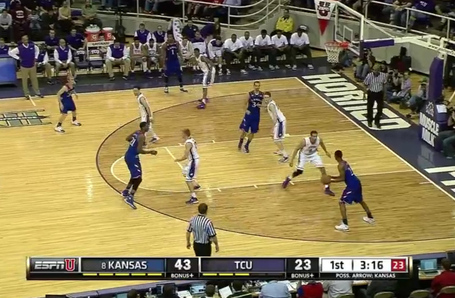 Wiggins must have thought, "Holy crap! I actually have room to drive? Surely this must be a mistake." 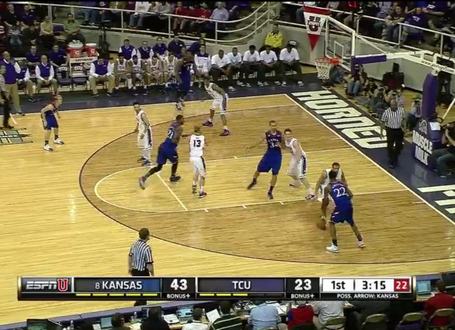 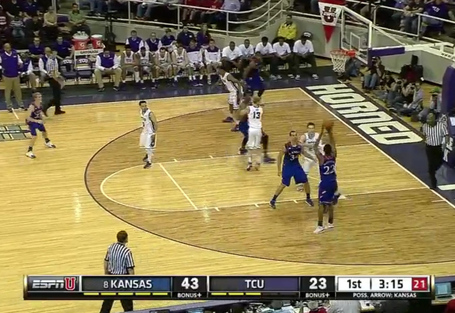 Wiggins adjusts by rising over the smaller defender for a jump shot. Which again, it's nice that he makes it, but this isn't exactly the most sustainable offensive blueprint for him going forward.

All of this to say, Wiggins is doing just fine. He's fantastic on defense (which no one apparently wants to talk about), a superstar in transition, and in the half-court he is doing the job he is asked to do, even if it's not the best role to showcase his skills. I do believe that because of all this, he is far more likely to excel at an elite level in a pro offense, where there is much more space, than he is at this level. Ideally, it would be nice to see a few true isolation plays called for Wiggins per half, throw in a pick and roll every now and then, and you could get a star wing really rolling heading into the most important two months of the season. However, it's unlikely to happen, as this has been Self's offense for forever.

I'm Tom Fehr, by the way. You can follow me on Twitter @TJFsports if you are so inclined, and I likely will post on this site more often. Let me know what you guys think.