After a long summer in the wilderness, Kansas finally gets to unleash Jake Heaps on an unsuspecting Big 12. RIP, everyone else.

Kansas kicks off their season a week later than everyone else (oh, to be able to put off every bad thing in life by a week just because we want to) and expectations certainly aren't too high in Charlie Weis's second year at the helm in Lawrence.

Pshaw I say, pshaw. With the best backfield in the conference, a new quarterback, and a host of transfers providing an influx of talent, the sky is the limit in Lawrence. And, as an added bonus, if you don't want to sit through the tedium that is 48 quarters of football (do we play 12 games? no idea. Whatever) I have exercised my soothsayer muscles to let you know just how Kansas will perform this year (spoiler alert: quite well)

As a native North Dakota, I can tell you one thing about South Dakota: it is shitty. The entire state just sucks. It smells like a garbage dump and looks even worse. As for the school, South Dakota lost to North Dakota in 2012 and that was the last time I ever heard anything about them. I don't know. I don't even have jokes. South Dakota is a nothing school in a nothing state and they have no chance on Saturday. 55-10, Kansas.

I had a bunch of why would you name your school after food jokes ready to go until I found out that Rice was actually named after some dude named William Marsh Rice, who, in addition to owning a general store, owned slaves and probably murdered his first wife. Classy guy. But, since Kansas has a lot of experience defeating people who love to own slaves, this should be a walkover. Kansas wins 34-7.

Louisiana Tech is close to Shreveport (kinda, maybe, I don't ever think about Louisiana except when I think about how Roger Goodell handed them an NFC title game victory over the Vikings because he felt sorry for them). Anyways, Shreveport used to have a CFL team (yes, a Canadian Football Team in Louisiana) and so I think the teams should agree to play by CFL rules for this one. Kansas wins 34-1.

Red Raiders head coach Kliff Kingsbury has been getting all sorts of plaudits for being the hot coach in college football, but it does not get any hotter than this: 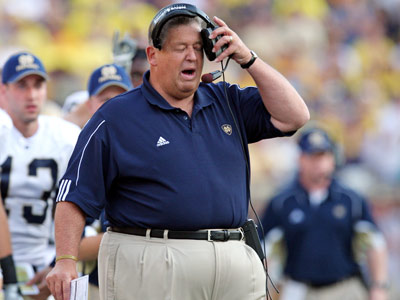 much like in that picture, Charlie will struggle to stay awake during this one as Kansas will be ahead early and often. 44-10 victory.

quarterback Casey Pachall has had a DUI and admitted he had a drug problem. Not very Christian, but very Texan. Then, TCU coach Gary Patterson let him back on the team. Not very Texan, but pretty Christian. So I am conflicted. Regardless, Kansas will dominate so badly that TCU fans will want to abort and go home at halftime. 44-7, Kansas

I am not a man prone to physical violence. But anyone in the crowd who beats the Oklahoma band to death with their own instruments so we don't have to hear boomer sooner 85,000 times should get a medal. Fortunately Kansas won't give up a first down the whole game so we won't have to worry about it. Kansas wins 17-0.

Speaking of Bible thumping weirdos, the biggest threat posed by Baylor will be whether any of the players will defect like they're from Cuba when they leave Waco and enter civilization. The other major bone to pick centers around writers who for some reason have Lance Seastrunk (seriously? that's his name?) as the best back in the league despite the returning rusher in the league being back in school for another year. Either way, he won't look like it in this one. Kansas 51-12.

Everyone knows how Mack Brown whiffed on Andrew Luck, RGIII and Johnny Manziel, and now the latest talk is how Jameis Winston, who dominated in his college debut for Florida State, wanted to go to Texas. Sweet Jesus, Mack Brown. Someone better make sure he can still drive a car and find his way to the stadium on his own. Does he realize he is a football coach? Or does he still think of football as a bunch of white kids in leather helmets still lining up in the wishbone? I don't even know which overrated quarterback they have in there now, but Kansas should never have a better quarterback than Texas. Yet, here we are. Kansas 28, Texas 3.

For some stupid reason Oklahoma State thought that Bill Self would want to coach there. He already escaped that prison once, he's not going to go back there voluntarily. Their last two quarterbacks have a combined age over 50, and probably a combined IQ under 50 given that they want to live in Stillwater. At the end of their time there, T Boone Pickens probably looked like the most attractive girl in the city. It will be tough for Kansas to play with one hand, given that the other will be pinching their noses shut, but they'll still manage to eke out a win. 34-7.

Holy shit how many football games do teams play? More than 10? Why? Anyways, I used up all of my hick jokes before getting to West Virginia, which is a rookie mistake (and also sheds some light on why the Big 12 is often compared to the SEC) but in doing research I learned that West Virginians burn couches because electricity hasn't made its way out there yet and it's the only way they can get heat. But the bottom line is they can never be expected to win a game ever again because of these awful baseball uniforms. And while we are on the subject of trashing other sports, West Virginia was a top 3 (or so) program in the Big East when they left, and ended up finishing 8th in the Big 12. Thanks for showing how good the league is, guys. Kansas 21, West Virginia 14.

Speaking of places no one in their right mind would go, it's Ames! Iowa State has a renowned veterinary school, which makes sense because Iowa State students want to make sure their husbands and wives are taken care of as well as possible. It's already been a rough go for the Cyclones, as they lost to Northern Iowa last weekend. Speaking of raising the profile of the league. Thanks a lot, guys. Kansas wins 73-10.

I wanted to scour the internet for reactions of K State fans after Kansas lost to NDSU, but that would mean subjecting myself to the shit that passes for analysis from those people. Expect a 15 minute delay in the first quarter when Bill Snyder challenges KU's first forward pass, thinking it hasn't been added to the rule book yet. Then watch him sit there with the same puzzled expression on his face the whole game. Seriously, his statue has more personality than he does. Kansas wins 63 to holy crap these are what attractive women look like.

Sadly I'm not good enough to determine who Kansas will face in the national championship game, but whomever it is will be no match. I'll say Kansas defeats Alabama, who will become flustered when Nick Saban can't see well enough over the grass to make an effective gameplan.