Twas The Night Before RCTmas

This is the 4th (I think) annual installment of the Night Before RCTmas poem. Thanks to all the writers, commenters, and readers who make this a special little slice of the interwebs

Share All sharing options for: Twas The Night Before RCTmas 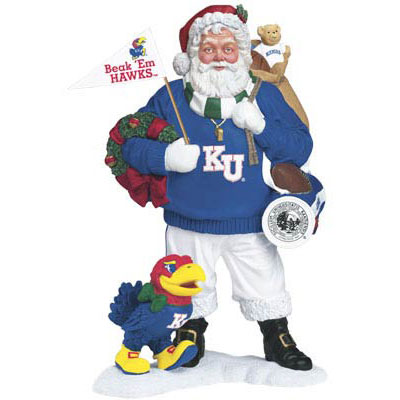 Twas the night before RCTmas, and all through the blog

Not a creature was stirring, not even the Phog.

The nets were all hung on their rims with care

In hopes that St. Wiggins soon would be there.

The players were all nestled at their lockers

Dreaming of a bowl win - I know, they're off their rockers

And I in my (Boschee) jersey, and Mrs. Notkapowski in her cap

Had just settled in for a pre RCTmas nap.

When outside on Naismith there arose a clatter

I ran out to see what was the matter.

I peeked outside my window, opening my blinds

And looked outside, and what did I find?

It was a sleigh, pulled by eight reindeer

And out of nowhere did they appear.

And who do you think was on that sleigh, afloat?

Why no one other than Bill Self, wearing a giant red coat.

Instead they were hoops players, and boy were they tall.

Down from they sleigh they came,

With HCBS calling them by name:

"On Wiggins, on Frankamp, on Selden, on Embiid!"

And so up onto Allen Fieldhouse they flew

With the sleigh full of our presents, and HCBS too.

Into the Fieldhouse they roared

And out of his pack, the presents poured.

He gathered them up, and unveiled them one by one

Ensuring our RCTmas would be tons of fun.

For Tarik Black, no more fouls for he

And for Frankamp, the ability to make a three.

For Jayhawk nation, another year of Joel

Now that's what I call a Joyous Noel.

For the commenters he gave an off topic thread

And, rather than awful play calling, an actual offensive coordinator instead!

Speaking of football, the coaching situation is an oh no,

So let's place a call to Ken Niumatalolo.

Not speaking a word, Self finished his work

And gave our stockings one final twerk.

The Fieldhouse, as always, looked sublime

And so up to the roof Self did climb.

We heard them exclaim, as they rose out of sight

Merry RCTmas to all, and to all a good night.