A Statistical and Video Look at Kansas Basketball Against Zone Defense

Has KU's zone offense been as bad as it looked the last couple games? Let's investigate

Share All sharing options for: A Statistical and Video Look at Kansas Basketball Against Zone Defense

Kansas fell victim to a 21-0 run against Florida on Tuesday, and while the 21 they gave up were rough, it was much more difficult to sit through possession after possession of Kansas failing to get a good shot, or any shot at all, against Florida's zone. It's been said over and over, but until Kansas can show they can beat it, teams are going to zone them without hesitation.

With Bill Self's insistence on not playing outside shooting threats, Kansas isn't going to be able to bomb over zones and instead is going to have to attack the soft parts of the zone. The two biggest soft spots (depending on which zone is being played of course) are the free throw line area and the short corners. Below I take a look at a possession where Kansas played the zone very well, a couple possessions where they can improve, and look at just how bad they were against the zone.

First, let's look at a possession late in the first half against Colorado in which quick, decisive passing led to a Landen Lucas dunk.

First, we see Frank Mason with the ball up top. Landen Lucas is where he should be, sitting in the gap between the two players at the top of the Colorado zone, with Selden and Tharpe on the wings, and Ellis patrolling the baseline. Mason really has three available plays, and his best one probably is passing to Lucas, but he elects to pass to Tharpe on the wing: 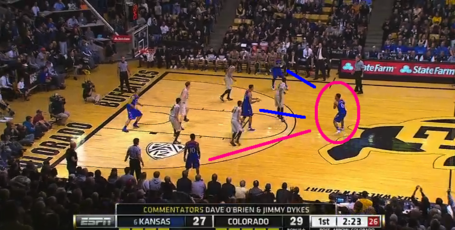 Next, we see Tharpe get the ball on the wing. He, like Mason, has three plays. He can reverse it back out to Mason, he can dribble into the lane, or he can pass to Ellis. The key here is that Tharpe makes a quick decision, before the defense can get totally set. We'll see why this is key in the next frame and when we watch the video. 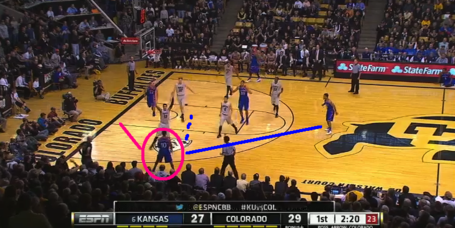 Here, Ellis technically has two choices, as he can shoot the ball, but Lucas is so wide open that there's really only one play. Again, the speed of the decision is what's important here. If the offense is passing the ball back and forth (preferably with some skip passes mixed in) it makes a zone less effective. The ball can obviously move faster than people, and it's a lot to ask a group of college kids to both react to rapid passes and all be in the position they need to be. Here, both the defender under the hoop and the defender guarding Tharpe have to react to Ellis, but because the ball movement, and Lucas's cut, were made quickly and decisively, the defenders on the other side of the lane and top of the key can't rotate over to help on Lucas in time. 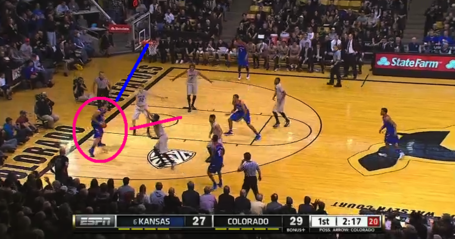 Next, a look at Florida in a 1-3-1, which had Scottie Wilbekin down low (mostly due to the fact that there was an offensive rebound before the start of this possession. I hope) and yet Kansas totally ignores Embiid posting him up. This isn't really running a zone offense per se, but it further illustrates Kansas's refusal to pass the ball to its best three players for some weird reason:

Back to the good, here's Kansas getting the ball to Ellis in the corner. He gets doubled and into some trouble, but Wiggins makes a really nice flash into the lane and gets an open jumper. He misses it, but it's an open look from 15 feet.

Lastly, here's Embiid getting the ball at the top of the key. He's right in the spot he wants to be, but no one cuts to the hoop, and he doesn't even think about making an aggressive move. Embiid can put the ball on the floor pretty well for a big guy, and at that point Patric Young, the player guarding him, had three fouls. Embiid was either going to get a pretty free look at the basket, or Young was going to pick up a big 4th foul. Instead, Embiid turned and made a negative pass. Still, the flash from him (and Perry Ellis earlier in the possession) was a good start at attacking the zone

I am going to break the fourth wall a bit here and address you, the reader, directly. The methodology here was perhaps a bit unorthodox, but I will tell you my reason behind it and you can tell me how much weight to put into the numbers below. One of the big downsides of a team playing zone defense is it's tougher to grab defensive rebounds. Syracuse, for instance, hasn't finished a season higher than 122nd nationally in defensive rebounding since 2003, and that was its only season above 200th. So, what I did was if Kansas missed the shot but grabbed an offensive rebound, I basically didn't count it as a possession.

Part of this came from me thinking about how I would score it if Kansas shot a three, missed, but made a shot off the rebound (or even if they cycled it back out and took another three and made it). I wanted to look at how Kansas did against a set zone defense, so I was not going to count putbacks and whatnot. But that would make Kansas look worse than they really were, since it would debit them for missing the shot against a zone, but there would be no way to credit them for grabbing a rebound and laying it in. So I compromised and basically made a possession however many cracks KU got at it before the other team got the ball. (the other, more simple explanation for this methodology is that I originally just wanted to see how well Kansas did when they didn't turn it over, and it evolved into this).

So that being said, here are the numbers. PPP is points per possession (or, rather, points between instances where Colorado or Florida have possession). PPPWOTO is points per possession without a turnover, looking at how well KU did when they managed to not throw the ball away. One final caveat: I took out most of Wiggins' end of game heroics here, since they weren't really threes against a set defense; they were more desperation heaves as soon as possible.

When remembering that the shooting percentages in this table are worse than they actually were (thanks to offensive rebounding), it looks pretty ugly, especially against Florida. Scoring .94 points per trip against the Gators even when they didn't turn it over isn't very good, but turning it over on 4 out of every 10 possessions is what killed them. If they had cut that even in half, keeping at the same scoring rate when they didn't turn it over, Kansas likely would have won the game.

The bad news is it looked pretty ugly at times. The good news is most of their problems are easy fixes. I saw a lot of stuff like guys going to set screens against defenders who weren't involved in the play, and there was a lot of passive passing around the perimeter. I have to assume the shooters will get more playing time, and once Joel Embiid gets comfortable playing at the free throw line, and once the guards get the ball to Perry Ellis in the short corner, Kansas should be able to score on zone defenses no problem.