After jumping out to a 10-0 lead, the wheels fell off in every way imaginable for the Kansas Jayhawks.

Share All sharing options for: Jayhawks Fall Apart in Loss to Texas Tech

*Before reading this, say a quick prayer, hug a loved one, or whatever you do to share good feelings in memory of Andre Maloney and that whatever happened with Tony Pierson is not serious.

Everything started off so well today.  The offense looked more than competent, I'd even describe it as looking above average in the first quarter.  The defense was holding strong on their end, ending Texas Tech's first possession with an interception by Ben Heeney.  On the first play following the interception, Jake Heaps hit Tony Pierson for a 28 yard gain to move the Jayhawks down to the 16 yard line.  A few unsuccessful plays later, we had the lead at 3-0.  After forcing a punt on Tech's next drive, the offense marched down and scored a touchdown to go up 10-0 halfway through the first quarter.  At this point, homecoming magic was starting to feel real.  Turned out to be voodoo as I can hardly think of anything that went right after the touchdown.  Texas Tech went on to score 47 points over the next three quarters before Kansas could score again late in the fourth.

When I say nothing went right, that's an honest assessment after watching the last 3 1/2 hours.  Name something that's a symbol of bad football and I'd place blind bets on it happening today.  Fake punt from deep in your own territory requiring the punter to run 26 yards for a first down?  Check.  Multiple botched snaps killing plays? Check.  Ridiculous number of brainfart penalties?  Check.  Refusing to even attempt to use the Big XII's leading rusher from last year?  Check.

There's more I'm sure but I'm also pretty sure the point got across.  As soon as the 2nd quarter started, everything went to hell in a handbasket.  At some point sooner or later, it has to be acknowledged that it's not just a lack of talent screwing things up.  Something else is factoring in to this equation.  How do you go from gaining 104 yards in your first two drives to gaining 36 yards over the next quarter and a half?  That's EIGHT freaking possessions.  36 yards.  ONE first down gained during those eight drives possessions.

It's not just that plays weren't successful, it's the approach as well.  In the first quarter while leading 10-0, Kansas forces Tech to punt and gets a good return by Embree.  First down gains 9 yards on a pass to Rodriguez Coleman.  On 2nd and 1, Heaps hurries a throw to the flats and it bounces at the feet of Brandon Bourbon.  On 3rd and 1, Charlie Weis brought in Michael Cummings as he had earlier in the game showing an option look.  This was the first thing I questioned in the game because it's a perfect time to take a chance downfield.  Cummings had not attempted a pass yet.  Field position isn't a huge factor.  Run a quick play action and see if something opens up.  Instead, we run the ball just like everyone expects.  Not only do we run the ball, we run a play that has James Sims starting on the right of Cummings and taking a handoff for an outside zone run on the left.  James Sims is a tremendous north/south runner, why call a play that forces him to run east/west when we only need a yard?

Unfortunately, this was just the lug nuts being loosened.  The next possession featured a deflected screen pass on 1st down, a throw into double coverage on 2nd down, and an incomplete pass underneath to Pierson on 3rd down.  Texas Tech caught on that it's easier to run than pass when the defense is dropping 6 and 7 guys into coverage on every play and moved down the field to make a field goal, cutting the lead to 10-3.  Kansas started their next drive on the 13 after not catching the kickoff in the air.  Heaps misses Bourbon by 10 yards on 1st down, completes a slant to Embree for 7 yards on 3rd down, and then a pass to Coleman ends incomplete.  Texas Tech drives down and scores a touchdown, tie ball game.  Uhoh.  Another kickoff doesn't get caught in the air and we start at the 19.  Cummings starts the drive at QB and we see our first botched snap as it rolls to Cummings leading to a 3 yard loss.  A run to Miller gains 4 yards, so we're back to 3rd and 10.  Here comes Heaps, wonder what the plan is now?  Screen to Sims for a five yard loss.  Then this happened.

To be fair, Charlie Weis looked as shocked as everyone else.  But this is something you never see happen on well coached teams. It doesn't matter if Weis called it, it matters that Pardula even considered it reasonable.  Shockingly, Texas Tech scored two plays later.

All you need to know about the rest of the game is that it didn't get better at any point.  Texas Tech ended the game with 518 yards.  They gained 31 first downs.  They were 10-21 on 3rd down conversions.  The defense got worked over after the first quarter.

Kansas on the other hand finished the game with 53 yards rushing.  53.  A lot of blame is being place on the offensive line so far and some of that is definitely warranted.  However, the play calling has not given the Jayhawks a chance at establishing a ground game. Darrian Miller had ONE rushing attempt before the 4th quarter today.  James Sims had TWO rushing attempts in the first half.  On Sims' next three carries he gained 12, 7, and 7 yards.  At this point, we're facing 2nd and goal from the 2 yard line.  Texas Tech is stacking the line and we run right up the middle for no gains on 2nd and 3rd down even though we know the line play has been bad.  On 4th and goal from the 3, we run a roll out pass with a quarterback that provides no threat of running into the end zone on his own.  Heaps is forced to throw into double coverage.

*Speaking of playmakers, Kansas had one returning player who looked like he could be a playmaker at receiver.  For whatever reason, he hadn't caught a pass until late in the game today. 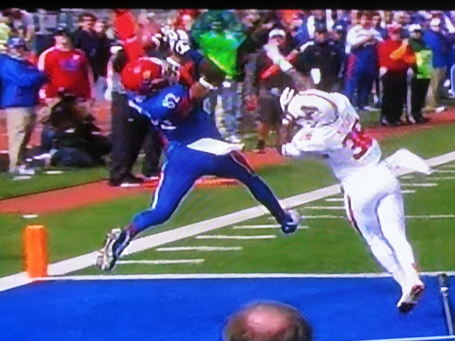 I'm supposed to believe a guy that can make that catch can't get on the field for this team?  With the way our passing game has gone this year?  I don't buy it.  At this point, I don't see how anyone can make the case that the Kansas Jayhawks are a well coached team or that they're heading in a positive direction.  We knew it was unlikely to be a good season but now that a road game at TCU and a road game at Texas are the most winnable of the next five games, we're looking at a very long season.