A detailed look examining the play of the Jayhawks offense and defense separated by quarter.

Share All sharing options for: Kansas Football: Breaking Down Performance by Quarter

One of the emerging narratives from this season has been the Jayhawks starting great in the first quarter and then running out of steam as the game moves along.  The early leads against Texas Tech, TCU, and Oklahoma have cemented this belief.  In each of those three games, Kansas was the first team to put points on the board.  In the case of the Tech and Oklahoma games, the team held the lead all the way through the first quarter.  Eventually the lead disappears and the team is left with another loss but simply getting the lead early can have a positive impact on the psyche of the team and the fans.

When thinking back to preseason goals, most fans wanted a conference win, a road win, and short of that at least signs of progress in the program.  Building or acquiring the lead in the first three conference games of the season definitely gives the impression of progress. It gives us hope that gameplans are formulated with purpose and that our players have the capability of executing the gameplans against Big 12 competition.  It builds our hopes for the upcoming games and seasons because we believe with a little more conditioning, a little better coaching, and just the right recruiting all will be well.  This is what keeps us coming back for more each week, these signs of progress.

These signs of progress are what brings us to the point of this post, are these signs of progress real?  If our gameplans in the first quarter are good and if our players simply start to struggle because of a lack of depth, then it should show up somewhat consistently throughout the first seven games of the season.  The team should be running more plays early in the game because the plays are successful.  The yardage gained should be a little higher than later in the game.  The same things should hold true for the defense as well, they should be more successful early than they are later in games.

To find out, I went through the first five games of the year against FBS competition and counted yards gained and the number of plays ran in each quarter for the offense and defense.  By isolating by quarter, I'm hoping to be able break down the games to see if these signs of progress are noticeable.

First up, plays by quarter for the offense. 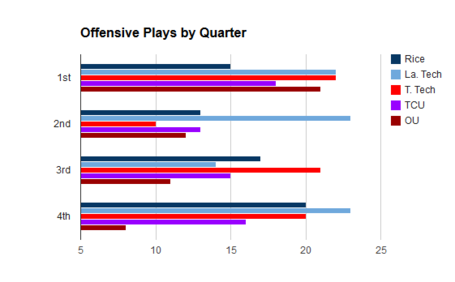 This shows pretty clearly that something is allowing the offense to run more plays in the first quarter followed by a pretty steep drop in the 2nd quarter.  Without context, it's tough to draw meaningful conclusions.  So lets move on the next look, yardage gained by quarter. 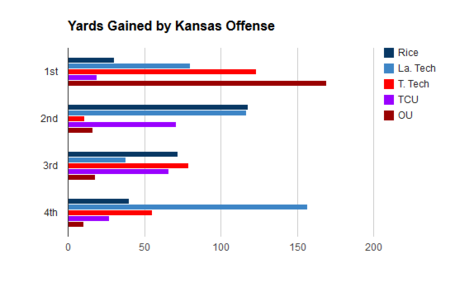 Not quite as convincing to me in terms of early success.  Obviously the first quarter from the Tech and OU games stick out but outside of that, nothing stands out for first quarter success.  The other three games actually saw the team gain more yards in the 2nd quarter than the 1st.  Just running a quick look, the first half average yards per quarter is about 20 yards higher than the second half but it also features a LOT more variance in the numbers. This also shows how running more plays doesn't always lead to more yards for the Kansas offense, look at the first quarter plays and yards for the Rice and TCU games.

Moving on to the defense, the graphs should show similar patterns but in the opposite direction.  If one team is gaining more yards and running more plays in one quarter, the other team should be gaining fewer yards while running less plays. 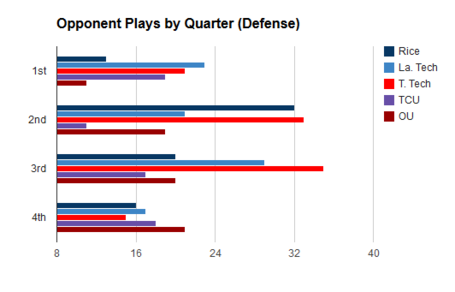 Not sure if this shows anything meaningful in terms of what we're looking for.  It highlights the insane number of plays Texas Tech runs.  I think it also shows the defense was a little fortunate to only give up 6 points to Rice in the second quarter.  Stopping them eventually pays off sometimes. 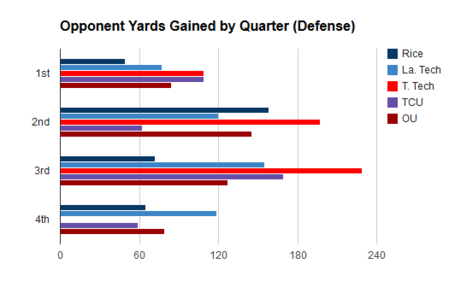 This pretty much follows the expected pattern.  Definitely acceptable performance in the first quarter.  2nd and 3rd quarter issues.  The 4th quarter doesn't add a lot to the discussion as teams have been playing ball control and working to eat clock.

Possible theories as to the cause of the early success:

The correct answer is probably a combination of all three explanations.  Successful offense and defense often comes from good gameplans.  As fans of the program, we have to believe this is playing a decent-sized part of this.  We also must hope the staff realizes this and is doing everything they can to find ways to extend the success.  My only question when it comes this explanation is why we don't see the success consistently.  In fact, the least successful first quarters have come against the three worst teams presented here.  I have a hard time believing it's a lack of motivation or gamplanning when the team is hungry for wins of any kind.  As to the depth, definitely playing a part though I think it's a bit overstated.  The defense shouldn't be impacted by depth as much in the 3rd quarter coming right off halftime and it's possibly the worst quarter on average in terms of yards allowed.  Depth plus not making adjustments could be added together to explain this.  The last explanation also has to be considered because even though these players are extremely talented, they're still humans.  It's a challenge to get up for games when the numbers and everyone else think a win is given when getting off the bus.

Of course there is a fourth explanation, the variance is pretty much random and fans will cling to anything to help them believe.