Another competitive game by the Jayhawks despite continued struggles by the offense.

The Jayhawks appeared ready to go for the battle against Oklahoma, coming out strong in the first quarter only to be stifled by lackluster offense for the remaining three quarters.  In a change of the emerging theme for the year, the early offense was fueled by the ground game and James Sims.  After the defense forced a punt on OU's first drive, the offense marched down the field on a 10 play, 70 yard drive.  Sims gained 63 yards on his own and with the rest gained by two Jake Heaps completions, one to Josh Ford for 6 yards and a 1 yard touchdown pass to Jimmay Mundine.  The offense continued to have some life following the Sooners second failed possession, gaining 34 yards before being forced to punt it back to the Sooners.  The opponents were beginning to wake up though, as they moved from their own 7 to the Jayhawk 32 before fumbling the ball which resulted in a recovery by the Jayhawks.  A Darrian Miller run of 38 yards put Kansas in great position to extend the lead early in the second quarter.  Following a somewhat questionable defensive pass interference, the Jayhawks scored again on a Sims run of 11 yards.

But because we are Kansas football fans, we can't have nice things.  Matthew Wyman missed the extra point attempt, leaving the score at 13-0 and foreshadowing what was to come over the next three quarters of play.  On OU's second drive of the quarter, they drove 55 yards for their first touchdown of the day.  On the following possession, Charlie Weis inserted freshman Montel Cozart at quarterback because he is Charlie Weis.  Following a holding penalty, a couple rushing plays that lost yards, and a blocked punt resulting in a safety the Jayhawks found the lead cut to five points and kicking from the 20.  A trick play resulting in a 49 yard touchdown put the Sooners up for good in the game.

From this point in the game, it played out largely as we have seen throughout the first half of the season.  Major struggles on the offensive side of the ball, highlighted by the opening drive of the second half resulting in a quick 3 and out followed by a Trevor Pardula punt that went 32 yards.  Blake Bell and the Sooners drove 58 yards to score their 3rd touchdown of the day and go up 25-13.  The Sooners would eventually score two on a KU extra point attempt and add another touchdown to bring us to the 34-19 final.

At this point, there are all sorts of questions to ponder.. First up comes from simply looking at the drive chart from the game. 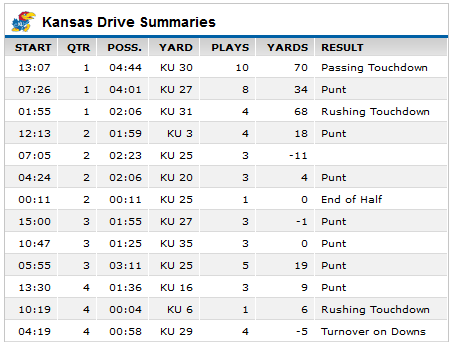 What allowed the offense to come out so strong on the ground when we haven't seen it all year?

What happens to the offense after the first quarter?  How can an offense gain 190 yards on the first four drives of the game only gain 26 yards on the next seven drives?  I'm hoping to be able to look more into this later in the week.

What in the world happened to the special teams unit this week?  Did the staff forget to assign anyone to special teams duty this week after the reorganization of duties?

Can we give up the uniform changing fetish?