Thinking out loud about this weekend's matchup between Kansas and TCU.

Share All sharing options for: Kansas vs. TCU: Thoughts

Over the last week, I've gone from having some hope of a competitive game where one or two plays can alter the outcome of the game to preparing for a beatdown similar to last week.  After four weeks, figuring the Jayhawks out is still a complicated and messy task.  Separating what happened last year and under the previous regime from this year has been one of the most difficult parts when trying to analyze and understand the season up to this point.  Charlie Weis was crowing about 1,063 days last week and that gets in my head.  That's an eternity when talking about college football.  But should that number have any influence on our judgment of this team?  Should that number have any bearing on what to expect heading into the game against the Horned Frogs tomorrow?  There's no right or wrong answer to that.  It's a gray area, nobody likes gray areas.

There are questions that we can ask and discuss that we know are relevant to tomorrow's game against TCU.

First and foremost, is the defense legitimately average to above average?  That question is not intended to seem negative, just that we can't make a definitive statement yet.  Going by S&P+ from Football Outsiders, the defense is ranked 80th overall.  Going through the components: 67th in success rate, 28th in points per play, and 42nd in S&P (combined success rate and ppp).  Mix in a little adjustment for competition and garbage time, 80th is the answer.  Is this reflective of what to expect throughout the rest of the conference season?  The tone gathered from reading comments here, twitter, and other places on the interwebs doesn't seem to imply a defense that is in the bottom third of FBS.  So I ask you to make a call, where does the defense stand after 4 games this season?

Maybe a more important question for tomorrow isn't so much about the defense but about the offense.  Using the same S&P+ metric, it's currently ranked 112th in the country.  TCU's defense is 16th overall, so we know there's a huge mismatch based on what has happened in the 2013 season.  At first, this wasn't too concerning because the offense has been bad and will likely be bad tomorrow whether it's against the best defense of the 60th best defense.  However, the more you think about this offense (112th) without Tony Pierson, the more concerning tomorrow becomes.  Just a glimpse at one particular issue created by his absence: 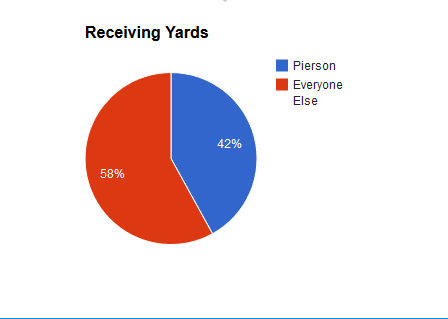 It's not just the total yards for the season, it's that over the last three weeks Pierson has had 95, 82, and 118 yards receiving.  If you've watched the games, you also know that it's probably safe to estimate that at least half of the yards gained by Pierson through the air have been gained after the catch.  This is when the Charlie Weis investment needs to pay off because it will be very impressive for the offense to gain 200 yards tomorrow considering the circumstances.  How do you expect the offense to attack the TCU defense tomorrow?  Run the ball, keep the clock running, and try to keep it close?  Stick to the shotgun and short passing game we've seen used over the last three weeks?  A lot of Cummings with the option look?