Why a Jeff Withey Block is More Than Just a Block

Jeff Withey is not only blocking shots at a record pace for the Jayhawks, he's creating opportunity and offensive production in doing so.

Share All sharing options for: Why a Jeff Withey Block is More Than Just a Block

Monday night Jeff Withey went an entire game without a block for the first time in 27 consecutive games. Given his average sits at near five a game, that's a fairly significant hole in the Kansas production. But all is well, Kansas wins in Manhattan, and the senior seven footer is poised to become the schools leading shot blocker by the time his career ends.

It's almost hard to believe that Withey has turned into the player he has after such an unceremonious start to his career at Kansas. Sitting behind the Cole Aldrich, the Morris twins and Thomas Robinson, Withey was rarely heard from during his first two seasons on the Jayhawk bench. Then last year when his minutes jumped from around 6 per game to nearly 25 per game, the big man showed the player development that Bill Self and Kansas are becoming famous for.

The piece that Withey receives so much credit for is his shot blocking prowess. He changes the game on the interior and is arguably more impactful defensively this year than 2012 player of the year Anthony Davis was a year ago. It's what happens after a Withey block that is also important. His timing and the manner in which he blocks nearly five shots per game turns into opportunity for Kansas more often than not. 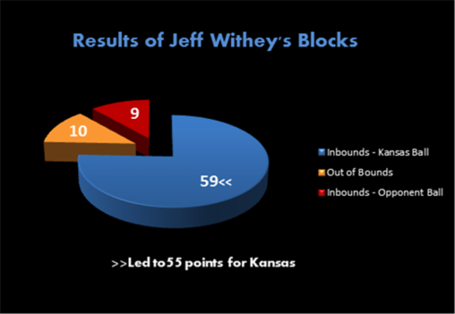 Heading into Monday nights game Withey's blocked shots resulted in 55 points for Kansas on the offensive end and 75% of the time it results in a Kansas possession. Bottom line, a block by Withey is about so much more than just a block, especially with the Jayhawk transition game. Just another reason to appreciate the big man's productivity.