From Where Does Kansas Take Its Shots?

Looking at how often the 2013 Jayhawks get to the rim

Share All sharing options for: From Where Does Kansas Take Its Shots?

Beyond Ben McLemore (and probably a healthy Elijah Johnson) it is safe to say that this year's Kansas team isn't dynamic on offense. But a lack of dynamism does not mean a lack of quality shots. To the contrary, Kansas ranks 21st in 2 point percentage and in eFG, and they are on pace to turn it over at the lowest rate of the Bill Self era.

The two best spots to take shots from are at the rim and from beyond the arc. At the rim is obvious: it is the closest shot and thus the easiest to make (assuming there is no Jeff Withey between you and the basket). Plus there are additional benefits, such as drawing fouls. The advantage to three point shots is that, while they are farther out, they are worth more points (duh) than a two point jumper. And, while most players shoot at a higher percentage on two point jumpers, it is not high enough to justify taking those shots over a three pointer.*

So when looking at the graph below, pay special attention to the people in the top right quadrant (or, alternatively, players on the top left and bottom right), as those are the ones who maximize their point scoring opportunities. They're labeled on the graph, but big men should be towards the bottom right, the Naadir Tharpe's of the world should be at the top left, and ideally Elijah Johnson and Ben McLemore - two guards who can shoot it but have the athleticism to get to the rim - should be as close to the top right corner as possible.

Thanks to hoop-math for the data. 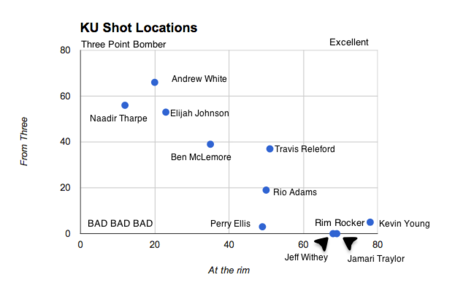