My Thoughts From Stopping By Kansas' Football Practice

Share All sharing options for: My Thoughts From Stopping By Kansas' Football Practice 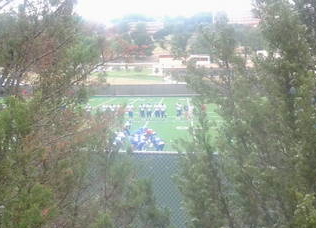 Has anyone ever eaten at Pepperjack's? It is probably the most amazing food in the world that doesn't incorporate the words "Cheese" and "Curds" and I had a craving. Of course, the one in Overland Park closed, so my only option was Lawrence. Today, Grad and Mrs. Grad made the long 40 minute drive from Olathe, KS to Lawrence so I could eat some Pepperjack's. I'm not kidding. It was incredible. I ate my cheesesteak sandwich, fries AND polished off my wife's sandwich. So good.

Anyways, I stopped by the KU football practice fields for a while afterwards to see what the team was up to. Wife didn't mind as she spent the time chatting on the phone with her sister. Score. Didn't stay too long but here are a few quick thoughts from my time observing:

1) Quarterback order - Saw Crist take several snaps, then Heaps, then Cummings, then Baty. Weis made it clear that Heapes is the QB of the future and would get reps all spring, but the season is less than a month away. Should Heaps still be in there? They were just working on running plays, maybe its time that we let the guys eligible to play this year get more work? Or should Heaps keep getting work since he will likely be the starter over the next couple of seasons?

Also, Cummings doing work with the team before Baty... is this currently how they stand in the race to back up Crist? Or am I looking too far into this? Also, for being listed at 6'2, 215 Baty didn't look very large. Crist certainly looks like a tank though.

2) H-Backs! There were H-backs predominately involved with the running plays. Trent Smiley lined up in the backfield quite a bit, and had some nice blocks to seal the edge on some off-tackle runs. I'd say out of every play I saw (again, all runs), 40% used an H-back, 45% used a fullback, and 15% had just a single back (gets out calculator to double check work).

3) Running backs - Bourbon got most of the single-back set carries. Sims got quite a bit of work, had a nifty spin move on one play to get in the open. Looks quicker to me, and maybe a little trimmer too. Didn't see much of Cox... he got some work but mostly runs that didn't go for much of a gain. Cox appears to have some good size though... while Sims is suspended, I wouldn't be surprised if he got a lot of the short-gain opportunities for us that we rely on Sims for. And maybe we won't need to use Opurum on some of the short-yardage plays.

5) Defensive line - Hard to tell who did what from my viewpoint, but Toben got into the backfield a couple of times and blew up the play. He looks lean - not any smaller, but not much fat on him. I'm buying the conditioning stories we've been reading. And he is quick, feet moved like a blur and the tackle blocking him didn't have much of a chance on one play. When Toben got to the back 3-4 yards behind the line, he squared up and made a beautiful tackle.

6) Buddy Wyatt - Is awesome. Dude is fired up, and he coached up guys after every single play, mostly focusing on leverage with the tackles and instructing guys to use their hands better.

7) Linebackers - Heard Schyler Miles get praise a few times for making some plays. He is going to play this fall, and who knows, maybe even start by seasons end.

8) Charlie Weis - Stood behind the offense the entire time, didn't say a whole lot. Chatted with Crist for a while, two were in a somewhat animated conversation. Crist did most of the talking, seems like Weis really values his input. The two trust each other. Weis didn't talk much with the other quarterbacks, but instructed Baty to call out more presnap reads, especially concerning the linebackers. I was hoping they'd call a draw or two with Cummings but only running backs got carries.