For the third summer in a row, realignment seems to be all the rage in college sports. But, after seeing Nebraska, Colorado, Missouri and Texas A&M leave over the past two seasons, the Big 12 is poised to add rather than subtract this year, with Florida State, Clemson, Virginia Tech, Georgia Tech and Notre Dame all mentioned as possible additions in reports of varying trustworthiness.

While a couple of those appear to be longshots at best, I nevertheless thought it would be a worthwhile exercise to examine the programs of those schools to see what they would add to the Big 12 as a whole and how they would affect the Kansas program specifically. Below is a master chart of the KenPom rating of each school for the past five seasons, with a closer look at each after the jump: 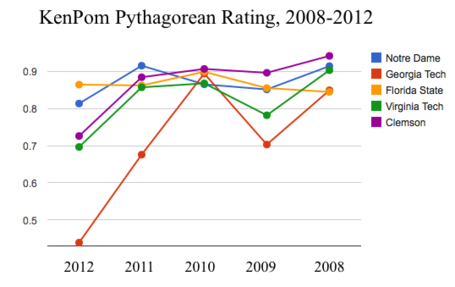 Obviously Notre Dame would bring most of its value via their football program and the obscene amounts of money they make per year, but the overlooked basketball program has quietly been very good over the past few years, and is in fact the best on this list. Much of that value, however, is due to the 2011 team, which grabbed a 2 seed in the NCAA tournament and was bounced in the second round by, coincidentally enough, potential new conference mate Florida State. Other than that they've spent most of their time in the 20s-30s of the KenPom rankings, as Mike Brey has done a great job in building a team that can beat anyone at home, but struggles a bit on the road. No Big 12 team has been consistently at that type of level like the Irish have, but the closest analogue is probably Kansas State. The Irish have gotten it done with a crisp offense, and have been in the top 10 in terms of turnover rate in 3 of the past 5 years. Given their struggles against Florida State in the 2011 tournament I don't think they would pose Kansas much of a threat, but would probably finish anywhere from 4th to 7th each year and consistently be on the verge of the NCAA tournament. They also would of course lend another big name and stability to the league as a whole.

Though Clemson's inclusion was met with tepid reluctance at best in yesterday's post, the Tigers have probably the most underrated program on this list, and one of the more underrated ones nationally. Of course, a big reason why is their soft non conferences schedules have traditionally allowed them to leap out to great records. Still, they have been a consistent competitor in the ACC, finishing 3rd, 5th, 5th and 4th before slipping to 7th last year. Like Notre Dame, they provide most of their value via football (though if you can only win the ACC once, how good can you be?) but their basketball program could probably slot in right where they are in the ACC, finishing 4th or 5th every year.

The Seminoles are my second favorite program in college basketball because of Leonard Hamilton and how he gets his guys to defend, especially lately. In the past four years the Noles have ranked 12th, 1st, 1st, and 15th nationally at PPP allowed. And they've done it in a way that suggests in absolutely is a true talent: they limit three pointers attempted, force teams to miss twos, and block a lot of shots. Their offense is too horrible to ever win the league outright, but their defense is so good that they can stifle any offense, possibly even including Kansas at Allen Fieldhouse. There's no question that adding a Florida member to the Big 12 would help Kansas recruit in that area, and personally I'd love to see the Seminoles and Jayhawks tangle twice per year in what would be a drag out defensive battle that would probably be more physical than our gridiron meetings.

I doubt the Hokies are coming because they are likely tied to Virginia, and I also don't think they add a ton basketball wise at this point. Though they barely missed the NCAA tournament in three of the last four years, the program is in disarray. After Seth Greenberg was fired just over a month ago, and the program went into the last live recruiting period without a coach. James Johnson was promoted to the position, but the Hokies still lost their top ranked recruit, Montrezl Harrell, and Freshman Dorian Finney-Smith plans to transfer. Finney-Smith made most of his mark on the boards, but also shot 37% from three and could no doubt have grown into a useful player. As it is, the Hokies have just one commit in the class of 2012 and none beyond that, so things figure to get a lot worse before they get better. On the court, they don't figure to offer much other than a middle of the pack team that thinks they should be better, and off the court they don't do much for me in terms of exposure or national appeal.

With the losses of Nebraska and Colorado, as well as last year's Texas A&M team, the Big 12 is suffering from a distinct lack of cupcakes. With Oklahoma figuring to get stronger thanks to Lon Kruger, TCU and Texas Tech are really the only two free wins in conference play.

Enter Georgia Tech, whom I think is a perfect addition basketball wise for the league. The Yellow Jackets have finished 7th, last, 7th, 10th and 10th in the ACC the past five years, and that was with NBAers like Anthony Morrow, Derrick Favors and Iman Shumpert on the roster. Georgia Tech provides the best of both worlds for Kansas: two free wins per year (or one, depending on how the divisions would shake down), plus at worst biennial trips to Atlanta, which has become fertile recruiting ground for the Jayhawks. With neither Georgia nor Georgia Tech able to offer much resistance recruiting wise, this would be a perfect way for Kansas to get their foot in the door, and, exposure wise, open up the Big 12 as a whole to the Atlanta market.