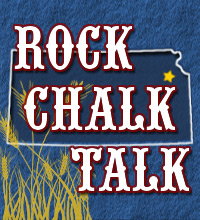 I'm moving out of my apartment starting today, and my last final was yesterday so it was a long night, so let's get right to it.

Half of these are sent in under pseudonyms, and I'll let the actual author reveal himself in the comments if he so chooses:

Q: Out of all the KU basketball players from the past decade, which has surprised you the most in that they didn't make it in the NBA? I always thought Wayne Simien was gonna be a pro fa sho.

I wouldn't say I'm terribly surprised at who made it and who didn't from the last decade or so, but one guy who I'm surprised never got more of a look than he did is Russell Robinson. He was one of the best on ball defenders in college basketball and he really improved his jumpshot in the D League when he went there. He's bounced around Europe the past couple years, spending 2011-12 in Turkey with Trabzonspor, where he averages 13.4 ppg and is shooting almost 40% from three. One thing that I suspect hurt him is his tendency to turn it over a bit much without being able to make the spectacular play to make up for it, but (and I certainly am biased) I have a tough time thinking he wouldn't do better at defending a lot of the league's point guards than the people currently trying to do it.

Q How big of a jump do you see Jeff Withey making next year? A big leap, or will not playing next to TRob be a bigger factor than most realize?

I think not playing next to T Rob will definitely be a big deal on offense, as he won't have as many free dunks or put backs, but I think he got quite a bit better offensively over the course of the year, and got to the point where if he caught it in the post and he wasn't doubled he was going to score more often than not. Plus teams can't foul him and force him to shoot free throws like they can with most bigs. So while he might be a bit less effective next year, if he gets doubled it should open things up for Perry Ellis and whomever else down low, and defensively I expect him to be the best interior defender in the country like he was last year, or at least very close to it.

Q: Is Yellowsub overrated? I mean shoot, it's good and all, but you wait like 20 minutes for a sandwich and all the people that work there are weird hipsters.

I have actually never been. How's that for a letdown? I'll go for lunch tomorrow since I have no more groceries in my pad.

Q: Lets say aliens land in your backyard. All they want to do is give you a slice of pizza that far and away the greatest slice of pizza you will ever taste in your life. When its gone they fly away and will never return. You will never be able to really enjoy pizza on earth again if you eat it. Do you eat it and chase "the pizza dragon" for the rest of your life or do you turn them down?

I think I'd have a lot more questions for them. First, how would they know how to make good pizza? Second, why pizza and not another type of food? But to answer your question yes I would take it. Don't come at me with pitchforks but I have never been gaga for pizza. I love Rudy's to death and would eat it pretty much every day if I could but too many places these days sacrifice quality for speed of preparation or quantity or whatever else they prioritize over quality of ingredients.

Q: How many games do you think the football team wins this year?

I probably should make this team and staff prove it to me, but something tells me that the team will have no problem winning the games they should win. So I'll mark 2 guaranteed wins over South Dakota State and Rice. While it is in DeKalb, Northern Illinois shouldn't be demonstratively better than they were last year, so I am going to tentatively mark that as a win as well. Last year's team "should" have beaten Texas Tech and Baylor and had a real chance of beating Iowa State, so I am going to bank on them winning one of those games and settle on 4. I really do think though that there is an outside chance, if they overcome the conditioning issues they had last year and some of the mental issues they had last year (and have everything break right of course), to get to 6 and make a bowl game. Call me crazy.