Kansas Basketball: Previewing Ohio State With Along The Olentangy

Share All sharing options for: Kansas Basketball: Previewing Ohio State With Along The Olentangy 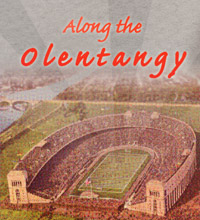 Saturday evening the Kansas Jayhawks will take on the Ohio State Buckeyes in one of two NATIONAL semifinal matchups to be played as part of the Final Four. The game promises to be a battle between two great programs, two great coaches and a host of great players. Today we take a few minutes to pick the brain of our Ohio State SB Nation representative, "Along the Olentangy".

I think first and foremost what has changed about this Ohio State team between now and when we played back in December? Obviously Sullinger is back and that's a HUGE deal, but what else is different about this team because at times they look significantly better but they've also had their issues during the regular season.

It's odd, but the biggest difference between then and now is the fall and corresponding rise of the team. Before Kansas defeated Ohio State in December, the Buckeyes were looking a stone's throw away from invincible, and every facet of the game was going well. In the following months, particularly in late February, the team lost its groove and began struggling. Losses against Michigan State, Michigan, and Wisconsin put the Big Ten regular season championship in jeopardy, and there were even rumors that arguments between players had destroyed team chemistry.

Then came the end of the season, where the players pulled together and beat Michigan State for a Big Ten championship tie, and the Big Ten Tournament, which saw the Buckeyes lose a disappointing championship game to the Spartans a week later. No one knew quite what to expect heading into the NCAA Tournament, but it appears the Buckeyes are once again on the upswing.

What reservations do you have when looking at this matchup based on the first game between these two teams?

Without Jared Sullinger, Ohio State needed William Buford to carry the scoring load. He did well enough, scoring 21 points, but not well enough, needing 23 shot attempts to score those points. Buford, at his worst, can be an inefficient shot hog who kills all Ohio State momentum and helps the other colored jerseys more than his own. My largest reservation is that Buford will revert to late-season form and self-destruct the Buckeye offense.

Beyond that, there are a thousand little fears at this late stage of the process. Facing a great team like Kansas requires something close to perfection, and anything could throw perfection off the tracks. What if Jared Sullinger gets into foul trouble, like he did against Syracuse? Can Sullinger's replacement, freshman Amir Williams, perform well against Thomas Robinson? Probably not. Evan Ravenel filled in for Sullinger against Robinson the first game, but Williams would likely be the next man up now.

Do you think the fact that Ohio State lost the first head to head here plays to their advantage when preparing for Kansas?

I'd like to say ‘yes,' but I don't believe it matters. No extra motivation is required for the Final Four. Both these teams are talented and well coached, and no outside motivational factor should affect them. The only reason that the first loss could help Ohio State, I think, is due to Jared Sullinger's absence. Kansas, and more specifically, Thomas Robinson, may need some adjustment time to this fully healthy Ohio State team.

What's your take on the media giving all the attention to Louisville v Kentucky and even moreso, just Kentucky heading into this Final Four?

I'll scream "SEC Bias" and leave it at that. But really, I suppose it's well deserved. Kentucky has more talent than half of the teams in the NBA, and it shows. When they dismantled Baylor, despite falling behind at a rate that would cripple lesser teams, it seemed as if they were simply showing off. Anthony Davis and Michael Kidd-Gilchrist form the best 1-2 freshmen tandem in the country, Terrence Jones and Doron Lamb provide veteran starting talent, and John Calipari adds both the name brand and flash the camera crews love. Oh, and Louisvile is pretty good, too.

The heavy media attention on Kentucky-Louisville may, and probably should, annoy Kansas and Ohio State fans, but there is a benefit waiting around the bend. Whichever team wins this game will have its shot at the juggernaut, barring the improbable Louisville upset, and can pull down the Wildcats from their lofty perch in the heavens.

Who is the most important player to the success of Ohio State and you can't use Sullinger?

Deshaun Thomas. I think I've accurately expressed the fear William Buford puts into the heart of every Buckeye fan. Deshaun Thomas is the comfort for that fear. When Thomas is on, he's one of the best scorers in college basketball. When he's off, he's still pretty good. Thad Matta can expect a certain minimum output from Thomas every game--15 points or so, and solid rebounding--filling the role that William Buford used to own as Mr. Dependable.

Without Thomas, Ohio State does not win the Big Ten let alone advance to the Final Four. He and Sullinger have developed a natural inside-out combination that stresses even the toughest defenses. Kansas will know it's in good shape after the first ten minutes if Sullinger and Thomas aren't playing well. Of course, the opposite is also true. Should Sullinger and Thomas start fast and find their groove early, the Jayhawks may need divine intervention, for no mercy will be offered.

Aaron Craft looked obnoxiously good on defense against Syracuse. He didn't have that same level of performance in Lawrence but from what I gather the Elite Eight game is more his norm. When and why does he struggle?

Craft rarely struggles on defense and almost always raises his game to match the scenario. In the NCAA Tournament, he has been awesome, scoring 33 points, stealing four possessions, and adding 19 assists , all while squeezing his opposing guards like a vise. Craft's effect is strongest when the opposing offense runs through its point guard-against Cincinnati and Syracuse, for instance, he affected the way both teams played offense. In these big games, Craft often takes the opponent's best scoring guard, so we can expect him to start against Tyshawn Taylor on defense. The battle between the two should be fun to watch and may determine the outcome.

Who wins this game and who wins the final?

I think Ohio State will win this game, but fall to Kentucky in the championship.