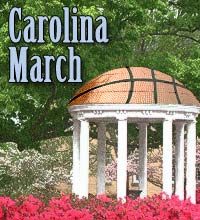 Later today Kansas will take on North Carolina in the Elite Eight with a chance to earn themselves a spot in the Final Four next weekend in New Orleans. This morning we take a few minutes to preview the Tar Heels with the help of SB Nation's North Carolina representative, Carolina March.

At this point the news seems to be the injury to Marshall. From my perspective it seems like it's being overblown because Carolina obviously is a great team outside of just Marshall. What is the opinion from the Carolina side? How much of a difference does it make if he plays at less than 100% vs. not playing at all?

The opinion from the Carolina side is that this was the worst possible injury this team could suffer. It felt like that before the Ohio game, and that only confirmed things. You have to keep in mind UNC had already lost their backup point guard (Dexter Strickland) to an ACL injury earlier this season. Stilman White is a freshman who UNC didn't recruit until late last season, after Larry Drew suddenly left the team. Carolina fans remember how the team struggled earlier last year even with Drew running the point - turnovers were a problem and ball movement wasn't what it should have been. White did a pretty good job against Ohio, but the team as a whole looked completely different in Marshall's absence. There's not much confidence among the fans, and this is the first time I can recall where a fanbase is less optimistic about their team's chances than the national media.

The Roy Williams Kansas connection is something that is always brought up. I think at this point that hatchet is buried with most reasonable Jayhawk fans, does playing Kansas mean something more to Roy or even the Carolina fanbase still?

I think Roy Williams is on record as saying he's never going to enjoy playing Kansas. He loves the place too much. I'm sure he puts this aside for the game itself, but he'll still be the unhappiest person in the building. As for Carolina fans, I don't think it ever meant anything more than two storied programs playing one another. I know I wouldn't mind avenging the 2008 loss, but as that team came back the next season and won a title for UNC, there aren't too many hard feelings there. Frankly, I'm more worried about our team than their opponent.

In terms of game planning I think a lot of Kansas fans are familiar with Roy's style but this UNC team seems a bit more defensively focused than some of Roy's teams in the past. Is that a consistent focus for this team or something that comes and goes depending on the style of the particular game?

This team is definitely better defensively than the 2009 championship team. I don't know if it's more defensively focused than Roy's typical teams; UNC usually plays very good defense, only to have it overlooked because Carolina's fast pace results in high scoring totals. Because this team has struggled offensively more than years past, they've relied on the defense to bail them out a little more. Tyler Zeller's and John Henson's gaudy block totals have also drawn more attention than usual. Their size really changes the way a lot of opposing teams have to play. (Unfortunately for the Heels, Kansas has the size to go toe-to-toe with UNC inside.)

Talk a little about the depth of Carolina. Beyond Barnes, Zeller, Marshall and Henson who else deserves some credit for the success of this team?

The most overlooked player is the fifth starter, Reggie Bullock. He started the season coming off the bench, only to be drafted into a starting role after Dexter Strickland's injury. Like Strickland, he immediately drew the role of defending the opposing team's best perimeter player, and he's very good at shutting folks down. In the last few games, he's found his shooting touch again,which is good, as without a consistent outside scorer, defenses just collapse on UNC's post players and the offense grinds to a halt.

James Michael McAdoo recently got a few starts after Henson injured his wrist in the ACC Tournament. It's done him a lot of good; he may have the most pure talent on the team outside of Barnes. (UNC fans are very amused by Charles Barkley's continued insistence that he's the best player on the team.) He's young, but will be a great post player in the years ahead.

You'll also see Justin Watts and P.J. Hairston in limited minutes. Both are scrappy defenders; Hairston, a freshman, is a shooting guard and will certainly shoot, whether it's a good idea or not. Watts is a 6'4" post player, with all the incongruities that entails. With Marshall out, he's the backup point guard, which is... workable. Both will pull down rebounds you wouldn't expect them to.

How do you beat the Tar Heels?

Generally, force them into a half-court offense, deny entry passes into the paint and make them shoot over you. Contest the rebound of every shot you take, even if you're tempted to abandon the boards to prevent the Heels' own transition offense. Hot shooting from behind the arc to spread their defense helps, and getting Zeller and Henson in foul trouble early will be a boon. Also, a season-ending injury for the NCAA-leading assist leader would help, but what are the odds of that happening?