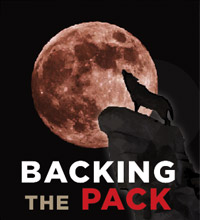 Tonight the Jayhawks head into the Sweet 16 to take on the NC State Wolfpack. Who better to help us break down the Wolfpack than one of their own. Steven from Backing the Pack, SB Nation's NC State representative, answered a few questions for me as I did for him. Here's the rundown as we count down the hours until tip.

What is this team doing right now that has made them such a hot team in the tournament? Is it a marked change from the regular season or just something that has developed with time?

It's mostly just maturation, I think. The fact that CJ Leslie is playing as well as he is and the team is peaking along with him is no coincidence. He's really started to fulfill his potential over the last few weeks, and that's huge for us. Lorenzo Brown has gotten better and better at the point guard spot; those two guys key everything we do right now. Which is not to say there are no other threats, just that they tend to be most vital.

Who creates the biggest matchup problem for most teams when playing against NC State?

There's no one standout matchup problem that this team presents, but both Brown and Leslie can create all sorts of trouble for opposing teams, especially as they've become more confident.

How would you describe the offensive and defensive strategies for the Wolfpack?

NC State runs John Wooden's UCLA high post offense, which makes CJ Leslie a key component. We don't rely on the three very much simply because Scott Wood is the only guy who's going to make them at a good clip. Lorenzo Brown and CJ Williams can hit from out there, they just don't attempt those shots nearly as often.

Defensively, State is a man-to-man team that's only going to go to the zone to protect players in foul trouble or to try to halt a run by the other team. It was an absolutely abysmal defensive team under the previous coaching staff, and as these are all players from that era, there are lingering issues. But I also think State has gotten better at this end in the tournament, which has helped fuel the run.

What type of teams have given NC State trouble this year?

NC State has been frustrated by bigger teams this season (see: UNC, Sryracuse, Georgetown, FSU). Of course, those are also outstanding teams, which is also a problem. Teams that take care of the basketball are an added nightmare. None of State's forwards are taller than 6-9, and they're more finesse guys than back-to-the-basket scorers, so the teams with imposing front lines tend to frustrate them and force them into more ill-advised jump shooting situations.

State must do a good job on the defensive glass and hope for a sub-par shooting effort from Kansas. The Pack doesn't do a good job forcing turnovers, which makes those other two areas more important. Toss in some hot three-point shooting from Scott Wood, and reliable contributions from Brown, Leslie, and Howell, and NC State wins. Otherwise it's most likely Kansas' day.