Share All sharing options for: Kansas Basketball: Team Plus/Minus, The Good and Bad

As we are all anxiously awaiting Thursday and especially Friday night to get here, I've been trying to think of the things that we need to see from this particular team in order for them to win at least two more games this year. We know the depth is questionable but that's not a new problem and really hasn't been much of a problem throughout the year. What has worried me all season has been the issue of what happens when a team does what Purdue did on Sunday. Focusing on Robinson and forcing the rest of the team to pick up the slack, that's something that has really worried me.

One of the ways I wanted to look back through the season was using the plus/minus WARDENSCORE for the team and identifying the games that it liked and the games where we struggled. The team number works just like the individual, good gets added together and the bad is subtracted. The arbitrary cutoff used was the start of Big 12 play to the present for a few reasons. First, I was hoping to save some time by avoiding the gimmes from the non-con part of the schedule. The second reason is the belief that this team has improved since the beginning of the year, so looking at games from early November could be misleading. 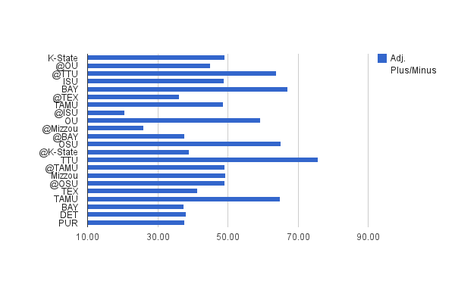 Armed with this information, I went to the best six and worst six games and broke down their scores to the individual level to see if anything sticks out. My hypothesis was that Robinson and Taylor would be pretty stable and the other guys on the team would make or break the scores. 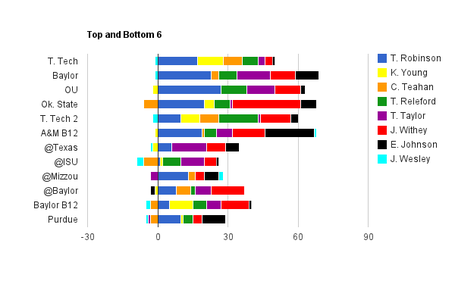 What else do you see or what did I get wrong?