When it was all said and done, yesterday was probably exactly what this team needed. The first half was about as pretty as it gets, but just as quickly, we were all reminded how ordinary they are when they're not dialed in. If they can re-focus and take care of business in Bramlage tomorrow, they'll be in phenomenal shape. 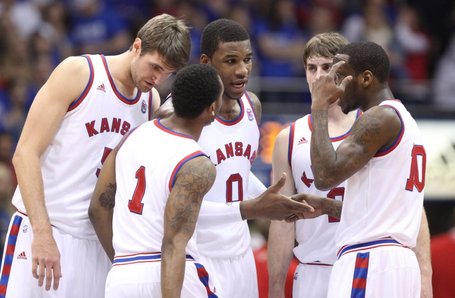 All of it deserved for the first half. Second half, not so much...

Offense nice, but for Elijah Johnson 'D' is key (LJW)

Could not agree more. I'd still like him to venture inside the three point line every once in a while though.

Self Unhappy with second half (KC Star)

If you were hoping to get some help from Baylor, you should have known better. Everyone who chooses to play for Scott Drew is getting exactly what they deserve.

Had I not seen the halftime score, this wouldn't have surprised me at all. I didn't see the second half, so I'm in no position to comment, but the free throw disparity (Texas 26, KSU 0) made me chuckle. I have to imagine that's the only way Texas could put up 48 in a half.

The next three for KSU: vs. Kansas, @ Baylor, @ Missouri. Think they need this one tomorrow?