Share All sharing options for: One Potential Defensive Adjustment

Kansas has had an up and down start to the season, sitting at 2-1, but it is pretty easy to argue they could and should be 3-0 right now. Still, there is no denying that the play has been up and down at best and there have been plenty of instances where Kansas has looked like they could not beat anybody, much less be the type of team to challenge for a second straight Final Four berth.

Most of the problems have come from trying to get players to adjust to new roles. No longer is Elijah Johnson a guy who is just supposed to take care of the ball and shoot threes; he now has to attack the rim and initiate the offense. And as a whole the team has to adjust to the fact that a Freshman is clearly the best player on the team and there will be plenty of possessions where they need to get out of his way, and for his part the Freshman (Ben McLemore of course) needs to recognize when to take over.

But a few problems have seemingly cropped up out of nowhere. They have been pretty good defensively this year, allowing .87 points per possession, but a couple of issues have cropped up*, especially against Michigan State and UT Chattanooga, that will absolutely get exploited in March.

*please note that among these issues is not the three point defense. True Chattanooga was on fire in the first half, but other than the fact that Kansas is allowing opponents to make fewer than one third of their threes, the majority of the threes attempted have either been while well guarded or from too far away to make guarding the shooter make any sense.

The first big problem is Jeff Withey hedging on screens. In theory, hedging screens is a great idea. It stops the ball handler from getting too much of a head of steam, it obscures their vision, and in the best case scenario forces them to pick up their dribble. The problem is when a post defender, say Jeff Withey, is not the quickest on his feet it leaves both he and the guard in no mans land, and the result is a scramble that also leaves your best rim protector 20 feet away from being able to do anything meaningful.

Let's start with a possession where, fortunately, it didn't hurt Kansas: 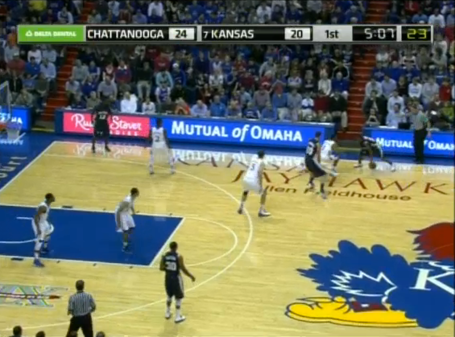 However, it all goes horribly wrong: 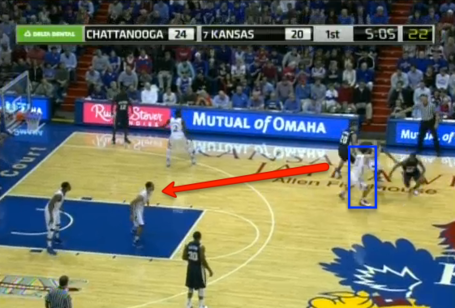 Withey for some reason thinks he needs to hedge out to almost half court, and with the spacing on the rest of the floor the rolling Moc has a near free path to the hoop (thanks, Perry Ellis for being in a good spot). Fortunately it's not what happened, but it easily could have. While Withey might not get burned by someone from Chattanooga, a big man who will be playing on a team that Kansas will see in the second weekend of the NCAA Tournament most certainly will be able to.

Next, a look at what happens when he tries to hedge against a much better guard:

Kansas was down just 1 with 1:30 remaining against Michigan State a week ago, but two Jeff Withey mistakes gave Michigan State consecutive baskets to help ice the victory.

In the first play, Withey hedges well, but when attempting to get back to his man he essentially functions as Michigan State's 6th offensive player, setting a screen on Elijah Johnson. 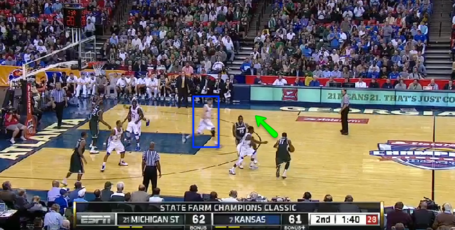 As you'll see in the next frame, Withey does a really good job of hedging here, cutting off Keith Appling so he can't turn the corner, and in fact stopping his progress completely: 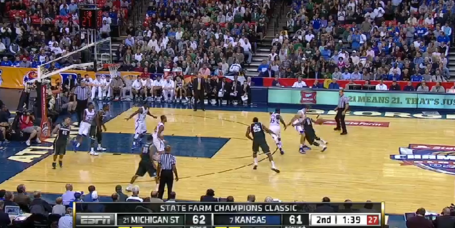 But, as can be a hazard when hedging, he gets lost running back to his man and essentially screens Elijah Johnson, giving Appling an open three: 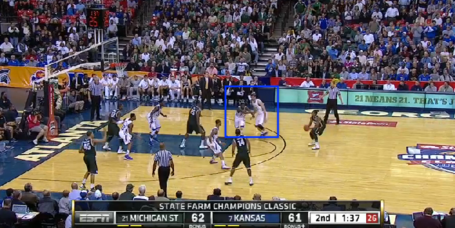 Appling hit the three to give Michigan State a four point lead:

Finally, a look at Michigan State's final possession, in which Keith Appling put the game away for good for the Spartans with a tremendous three point play. One that just so happened to be helped by Kansas not having their best rim protector on the floor.

In the first and only still frame of this video, Withey hedges the screen, but only half way. He steps up a bit, but doesn't go to cut off Appling at all. As a result, Elijah has to run with Withey's man and Withey has to take Elijah's, or in other words guard Keith Appling at the top of the key: 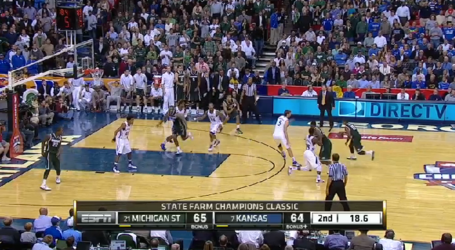 Poor hedging on screens has already cost Kansas one win, and if they don't fix it soon, it will likely be one of the main culprits of their ouster from the NCAA tournament. Again, this isn't to suggest it is their only problem or even their biggest one, but it is one that is easily fixable and one that could and should be immediately addressed.

If I were given the ability to suggest what to do I would probably say that they should leave Withey in the lane as much as possible, inasmuch as he is our best defensive weapon. It also would also enable him to conserve his energy more (although if he fouls at the rate he did last year that probably won't be an issue).

Regardless, it is certainly something to watch going forward, starting with tonight's game.