What is a true point guard anyways? Kansas doesn't seem to have them, and things have been just fine in Lawrence.

With top 10 recruit, and potentially the best class of 2013 point guard, Cat Barber committing to NC State, many Kansas fans were left wondering who would be the point guard for the 2013-14 team once Elijah Johnson graduates. At first glance, it appears to be potentially a serious issue: Naadir Tharpe is the only "true" point guard on the roster, and regardless of how bullish one is about his future (and I am very bullish) there is no denying that results were at best mixed during his Freshman season.

Fortunately, this shouldn't be a problem. Self has told 2013 recruit Conner Frankamp to be ready to play both the 1 and the 2, and in truth this is how Kansas has operated during Bill Self's entire tenure. And, like most things Self does, this is an incredibly smart idea for one basic reason: there really is no such thing as a true point guard. It is pretty impossible to create a one size fits all guard and, as Drew Cannon of Basketball Prospectus has very well stated, how "good" a point guard is almost entirely depends on the talent around him. To use KU examples, Sherron Collins was extremely valuable to the 2009 Kansas team because he could take (and make) tough shots, and he could get into the lane if the offense broke down. He really was option 1, 2 and 3 for that team, which is exactly what they needed. Fast forward to the next year and Collins' value was drastically diminished. Because Kansas had so many more offensive weapons, they really needed more of a distributor who could make open shots. Collins wasn't that, and proved it by shooting them out of the NCAA Tournament (though it of course was not entirely his fault).

We can't be sure which type of guy Kansas will need next year (and in truth it probably won't matter as Bill Self favors combo type guards anyways), but we can perhaps get a brief preview by looking at who has led the team in the past* To demonstrate this I am using a four quadrant graph using shot% and assist rate to denote how "shoot first" or "pass first" a guard is.

*I am sort of using my best judgment in terms of counting point guards. For example, I am counting both Elijah and Tyshawn from last year, Chalmers and Robinson from 2008, etc. 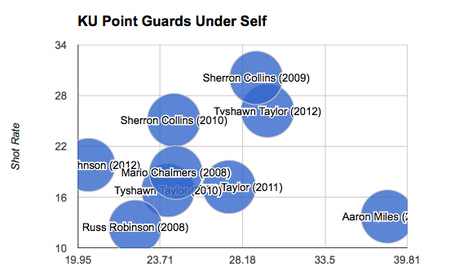 A couple of brief notes: the median should be moved to the right a bit, but then the dots would be even more jammed into each other than they are now so for aesthetic purposes I made the executive decision to leave as is. Secondly before punishing either Robinson or Chalmers please note they had to play with each other most of the time and shared a lot of the PG duties so their numbers are going to be deflated for that reason. Lastly Tyshawn Taylor went from a high assist (and, fair, high turnover) guy as an underclassman and when Kansas needed scoring he stepped up in a big way as a Senior. He remains probably the most underrated Jayhawk of my lifetime.

Because I couldn't figure out how to decrease the size of the dots I provided the full table below: