Justin McCay Will Transfer To Kansas

Share All sharing options for: Justin McCay Will Transfer To Kansas 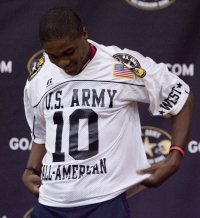 Justin McCay spent the last 48 hours on campus visiting the University of Kansas for his second recruitment so to speak, and it appears the former four star wide receiver is going to be a Jayhawk. JayhawkSlant is reporting that McCay has given a commitment to Charlie Weis and is currently taking the necessary steps to enroll as a transfer this coming Spring.

Just two years ago McCay was one of the more sought after recruits in the Kansas City area before electing to play his college ball for Bob Stoops and the Oklahoma Sooners. McCay was the top player in the State and ranked 6th among all receivers in the 2010 class. At the time many believe his second choice would have been Kansas State with Missouri, Kansas, Oregon, Florida State, Florida, Notre Dame, Georgia and others all offering the Bishop Miege wideout a scholarship.

Heading into this decision McCay is said to have received a special release from Oklahoma that allows him to transfer within the conference without the added eligibility penalty that an in conference transfer normally sustains . With that, McCay was set to evaluate opportunities close to home at Kansas, Kansas State and possibly Missouri. This go around the momentum shifted a bit in terms of the situation at Kansas. With the hire of Weis and subsequent hire of McCay's former coach Tim Grunhard, McCay had a familiar face to identify with on the new Jayhawk staff.

All said and done Kansas was his first visit and his last. The Jayhawks add a 6'2" 210 pound wideout transfer and the former four star player will have a second chance to make an impact, this time with a team right in his own backyard.