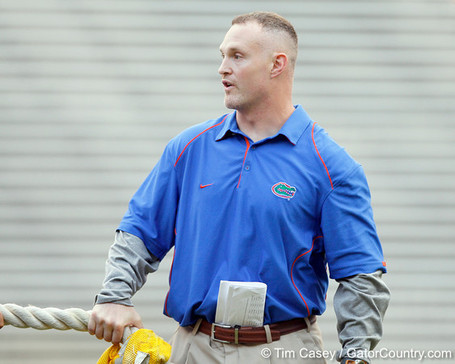 Another day, another rumor confirmed. Scott Holsopple has officially been named as the Director of Strength and Conditioning for Kansas football by Head Coach Charlie Weis.

This is a huge hire for a program like Kansas. I don't mean that in the sense that Holsopple is a homerun or some sort of miracle worker, but what he does during his time with Kansas football will be HUGE when it comes to the potential for success at Kansas. The impact of the S&C program is of the utmost importance at any University, but for a program like Kansas where you have to overachieve in developing talent it becomes even more critical.

If you need an example all you have to do is look at Chris Dawson's time at Kansas under Mangino and then look directly to the West and see what Dawson has done during a short stint at Kansas State. Kansas needs Holsopple to produce similar results when it comes to preparing Kansas to compete in the Big 12 from a physical standpoint.

Scott Holsopple joins Kansas after serving as the assistant director of strength and conditioning at the University of Florida. Holsopple recently completed his fifth season at Florida, where he worked as the top assistant with the Gator football program. At UF Holsopple worked under the highly-regarded Mickey Marotti, who recently departed his position as Director of Strength and Conditioning with the Gators to serve in the same capacity at Ohio State.

During Holsopple's time at UF the Gators won the 2008 National Championship and Southeastern Conference title, while registering a 50-17 overall mark in his five years. Additionally, Florida appeared in five bowl games (two BCS bowl appearances), recording a 4-1 mark, with him on staff. Holsopple helped mentor 18 athletes who went on to be drafted into the NFL, including six First Round draft picks.

Holsopple joined the Florida staff in May 2007, after spending the 2006-07 season with the University of Kentucky men's basketball team.

Prior to Kentucky, he was at Marquette for six seasons. He was hired by Marquette in the fall of 2000 to work specifically with the men's basketball program, but served as the head strength and conditioning coach for five years. In that position, Holsopple was responsible for the total development and strength and conditioning programs for all 14 of the Golden Eagles' Division I athletic programs.

Prior to Marquette, Holsopple served as the strength and conditioning assistant at his alma mater, Penn State. During his time there, he helped develop and implement a comprehensive, year-round strength, conditioning and agility program for the school's 28 athletic teams.

Holsopple began his career in the field as an intern at Notre Dame under Marotti and was the strength and conditioning coordinator at Ken Chertow's Olympian Wrestling Camp.

Next up for Holsopple? Delivering on the promise made by Charlie Weis that winter conditioning isn't going to be a very fun time to be a Kansas football player.