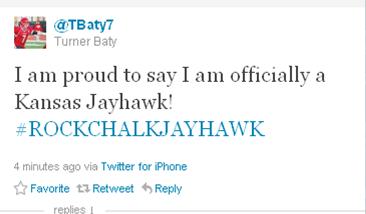 If you follow Turner Baty on twitter this was probably expected, but now it is official. Just a few days ago Weis addressed a question related to quarterback depth by saying that he thought Kansas had that area addressed. It's not clear what exactly he meant but that statement was made shortly after his visit with Baty and just before Baty was set to arrive in Lawrence for a visit. Looking back it seems that Weis was pretty confident in the fact that Baty would join the Jayhawks in 2012.

Baty was the quarterback for the junior college national champions City College of San Francisco. During his one season there, the 6'2" 225 pound quarterback threw for 42 touchdowns as a true freshman. And that is really what makes Baty unique. Unlike a lot of junior college players, Baty didn't go the JuCo route due to academics. In fact, Baty held several Ivy League offers out of high school.

He instead chose to take a year to try to showcase his talents at a lower level and earn himself another shot at a BCS level program. That opportunity came at Kansas and Baty will now have four years to play his remaining three years of eligibility.

That means that next season Baty has an opportunity to compete for the starting job and if not he's another great option as a backup if something should happen to Dayne Crist. Then he's competing with Jake Heaps and the other quarterbacks for the starting spot in 2013. If Crist does win out, which would seem to be the expectation, Baty could even spend next season taking a redshirt and then he'd have an extra year remaining after Heaps is gone. Kansas essentially went out and replaced a certain departing quarterback with someone who has actually been playing football this past year and that's a good thing.