Share All sharing options for: Is Elijah Johnson the new J.R. Giddens?

Since the anger toward Tyshawn Taylor has (finally) died down in recent weeks, a couple of other players have been vying to take his place as the vogue KU player to blame the team's problems on. It's never fair to pile on a single player in a team sport like basketball, but it's in sports fans' nature to do so. Whether it's Josh Selby, Brady Morningstar, Xavier Henry, or Taylor, there always seems to be a particular player the negative talk seems to center around. The two currently competing for this undesirable status seem to be Connor Teahan and Elijah Johnson. The complaints surrounding Teahan seem to be general grumbling. He's not a starter and I don't think anyone expected great things from him this season anyway. More of the heat seems to be on Elijah Johnson.

Johnson came to Kansas with a lot of expectations to live up to. He was a five star recruit known for his incredible athleticism and highlight reel dunks. Last year, as a sophomore, he was able to shoot 40% from three, which really had fans buzzing. Johnson looked like he had developed into the whole package. He had the explosiveness to be an effective slasher, and seemed to have developed the jump shot to become a legitimate perimeter threat.

Fast forward to this season. Elijah is finally getting starter's minutes, but scores fewer than 10 points per game. He camps out around the perimeter, and rarely enters the lane. He has 20 more three point attempts than anyone else on the team, despite hitting just under 30% of them. This story reminds me so much of another recent Kansas player it's startling. I'll go into more detail after the jump.

We all remember J.R. Giddens. His stabbing at the Moon Bar probably made more of a lasting impression on Jayhawk fans than anything he did on the court, but Giddens also came to Lawrence with a lot of hype. Giddens, much like Johsnon, was a great athletic specimen, and after a freshman campaign in which he scored over 11 points per game and shot 41% from three point range, KU basketball fans were drooling over the possibilities for this multifaceted offensive threat. Sound familiar? 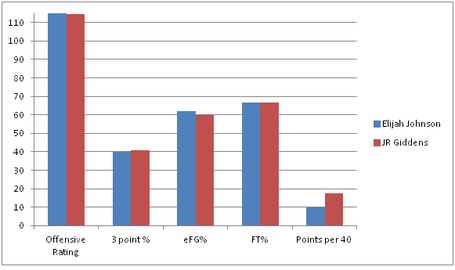 (note: this was my first attempt at graphing this sort of thing, don't laugh)

Outside of pure scoring, '04 Giddens and '11 Johnson are very similar offensive players. I didn't include assists and turnovers. EJ played a lot of point, whereas Giddens was more of a pure small forward, so Johnson naturally produced more of both.

Now we come to the 2004-2005 season. On a team that featured Wayne Simien and Keith Langford, JR Giddens was possibly the team's most talked-about player in Lawrence. After getting fans' hopes up the previous season, Giddens developed a frustrating habit of perching around the 3 point line and hoisting up deep shots instead of attacking the rim, like so many of us wanted him to do (again, sound familiar?). The result, statistically speaking, was eerily similar to what we're seeing out of EJ right now. The following are the same categories for Giddens' sophomore season and Johnson this year. 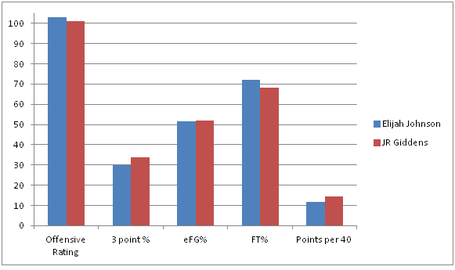 If anything, much-maligned Giddens may have been more effective offensively in his disappointing sophomore effort than Johnson has been so far in his junior year. Not included in this graph is the number of threes taken by each player. '05 Giddens hoisted up 6.2 3 point attempts per game. Johnson is attempting 5.4 this season. Each number is the highest on their respective teams.

At the end of the day, this probably tells us nothing about the future. After all, there's no way of knowing how Giddens' career would have played out at Kansas had it not been for his dismissal from the team. Still, it's interesting to note just how similar both the criticisms and the performance for these players are. Giddens never did turn it around in 2005 (and I don't have to tell you how that season ended). Obviously, this team could still ultimately outperform their 2005 counterparts, but I'm not holding my breath about Johnson changing as an offensive player this season.