Share All sharing options for: Kansas Basketball: A (Semi) Statistical Recap of Baylor 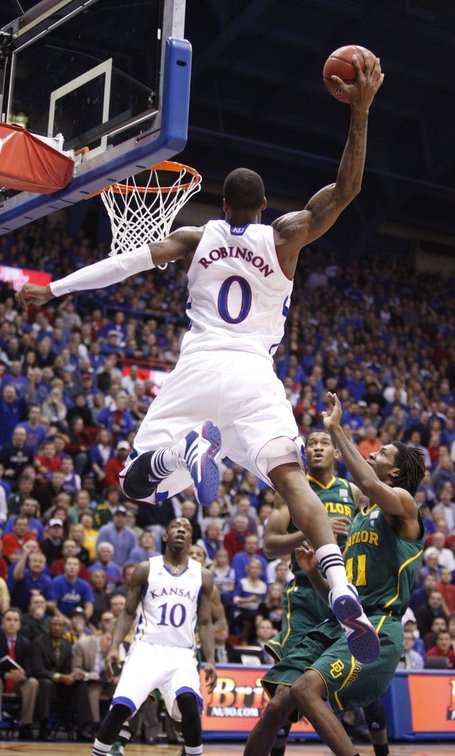 To be honest, it's probably impossible to put into words what happened last night, so I'll just leave this here.

This game came down to one thing, and one thing I never thought I would highlight this year: the Kansas offense. Kansas scored 1.296 PPP on the second best defense in the conference, and did it shooting 58% from two. Baylor is the 13th best two point defensive team in the entire country, with tall long premium athletes roaming the paint, and Kansas shot 58% inside the arc. They also shot 6 for 11 from three, which was a huge help, but the two point offense won the game.

Defensively it was a bit of a struggle, allowing Baylor to shoot 55% from two and to score 1.04 points per possession, but they did well outside the arc, limiting the Bears to just 7-23 from three.

The Jayhawk offense turned it over on 21.1% of their possessions, but when they got a shot up the possession was almost guaranteed to end in points being scored, with Kansas putting up a 62.3% eFG and rebounding 48.4% of their misses.

More on the dominant effort in the player notes, but the major challenge now is getting re-focused against Texas on Saturday. And Scott Drew, please ditch that zone vs. Missouri. Thanks.