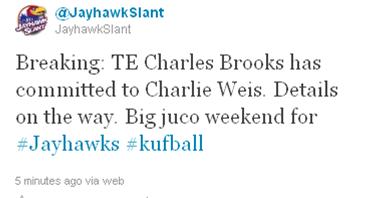 Looks like it's been a good weekend for Charlie Weis and company on the junior college recruiting front. JayhawkSlant is now reporting Charles Brooks as the latest commitment to the Jayhawks. Brooks is a 6'5" 245 pound tight end out of Scottsdale Community College in Arizona.

Brooks joins Josh Ford and Taylor Cox as the latest commitments to the 2012 class for Kansas. All three were Rob Ianello recruits.

Brooks is from the St. Louis area and didn't begin to play football until his senior year. In that lone season Brooks contributed 33 catches for 769 yards and 8 touchdowns. After this past season Scottsdale CC, Brooks started to draw some attention at the division one level. His offer list includes Ole Miss, FIU, New Mexico and a few other smaller schools.

Brooks is a big body at a position that Weis has had some success with over the years. With the departure of Tim Biere and AJ Steward, Brooks will have the opportunity to compete immediately with Jimmay Mundine and Trent Smiley for playing time.