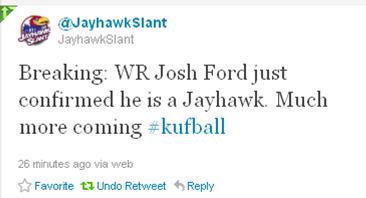 JayhawkSlant is confirming that Josh Ford, a 6'4" 200 pound junior college receiver out of Arizona Western has committed to Charlie Weis and the Kansas Jayhawks. Ford jumped on the radar for Kansas after his enrollment at either Miami or Maryland at semester fell through late. That opened the door for the new Kansas staff and after visiting campus this weekend Ford is ready to be a Jayhawk.

Ford caught 58 passes for 845 yards and 10 touchdowns in his final season of junior college ball. As mentioned he had received strong interest from Maryland, as well as Miami, Utah, Utah State, and Bowling Green. Ford marks another junior college recruit to go along with several transfers for Kansas this offseason.

The recruiting approach by Weis early on is noticeably different than Turner Gill's build from the ground up mentality where Gill focused primarily on high school prospects. Weis and his staff seem focused on turning things around in a hurry by whatever means necessary and that included junior college talent and transfers. Some of that could be the shortened recruiting cycle that Weis is working under this year and certainly some of that has to be based on his initial assessment of where Kansas needs to improve in a hurry.

With Ford Kansas adds a receiver with size and speed. Now Kansas does have several other players that fit that mold on the roster but none of those players has been able to take the next step during Gill's time. Obviously Weis seems to value this type of receiver a little more based on his system and what he has been recruiting, but he clearly hasn't seen what he wants out of the roster just yet.