Kansas Football: Players And Recruits React To The Campo Hire

Share All sharing options for: Kansas Football: Players And Recruits React To The Campo Hire

Anytime you change staff there is obviously a honeymoon phase. The saying goes that you are either buying yourself success or you are buying yourself hope. Right now Kansas is in the business of buying hope and they seem to be doing a pretty solid job of that with the hiring of Charlie Weis, the announcement of his staff and the subsequent moves in recruiting.

Today was the big hire that everyone had been waiting for. The offensive side of the ball seemed to come together quickly, but when it came to who would lead the defense things had been up in the air until today. Dave Campo is the guy and reaction is flooding in from fans, players and recruits.

Toben Opurum plays on the defensive side of the ball and being from the State of Texas and a Cowboys fan at that, he's probably pretty familiar with the name Dave Campo.

When it comes to recruiting, one name that has been floating around these past few weeks is Kenneth Crawley. His reaction would seem to mark a bit of a shift compared to his tweet earlier this week. 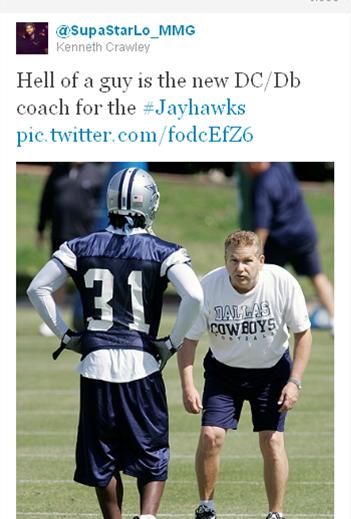 Then you've got Daymond Patterson who is going to be back for one more go around. Patterson has been here through two staffs already and he's played on both sides of the ball. Patterson is also a player that calls the Dallas area home.

Obviously you wouldn't expect a negative reaction from players so take it for what it's worth. But I do think the positivity that is surrounding the program now is a major positive.

As Charlie Weis said, the team is going to have to come in ready to work. That starts this Sunday with a team meeting. Weis now has the majority of his staff in place and it is a staff that will have players excited.

At least now they have a group of coaches that they can feel confident with when it comes to a Saturday game plan and managing a football game. As much as some of these guys like Turner Gill as a person, I think his track record and the quality of the product on Saturday's left quite a bit to be desired in those two areas.