Share All sharing options for: Clint Bowen And The Kansas Football Twitterverse

So the big news last night and into this morning seems to be the apparent rehiring of former Kansas defensive coordinator Clint Bowen. At this point the role of Bowen seems fairly undefined but the belief is that he will return in some capacity as a defensive position coach, perhaps a special teams coach, but not likely as the defensive coordinator. That job remains to be filled. 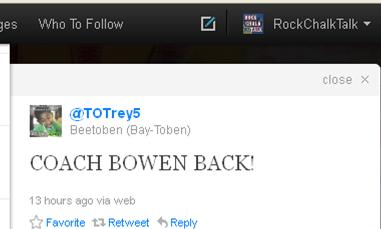 Of course the news of Bowen has now been reported several sources, but yesterday was one of those days that presented a prime example of news breaking through twitter. First there was a tweet about Bowen from defensive end Toben Opurum.

It's not perfectly clear if this is news that Opurum heard himself or if this was something he picked up from the rumor mill but this tweet did seem to set into motion several reports including the one from KUSports.com writer Matt Tait.

Obviously those outlets have to have sources other than twitter to confirm this type of report, but it is interesting that this tweet from yesterday evening appears to be the first trickle of information on the hire.

Elsewhere in the Kansas football twitter world there were some other interesting developments yesterday.

If you have been following the Brock Berglund saga you are aware that yesterday was the date that his case was set to begin. As reported by Matt Tait the case was taken off the docket and if you follow Berglund on twitter you'll see a tweet from a friend that appears telling.

Follow that up with Berglunds own tweet picturing a very happy picture of himself next to an individual that is very clearly his attorney Kevin McGreevy. Draw your own conclusions but it would appear that Berglund might have his house in order and hopefully this means he's set to return to Kansas this Spring and start learning under Charlie Weis. 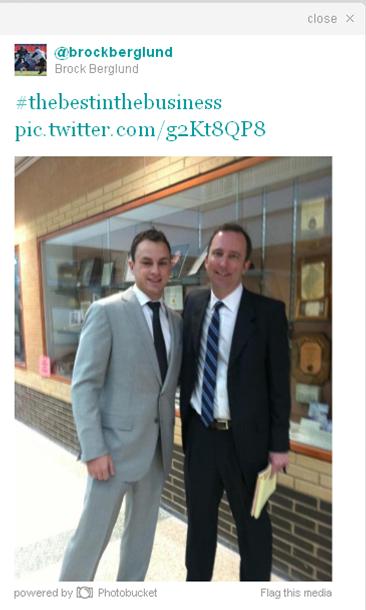 Next we turn our attention to the not so good news from Twitter. A little over a week ago we learned that four-star corner Kenneth Crawley who had previously committed to Tennessee would take a visit to Kansas.

While that appears to still be the case, many have questioned how the delay in the defensive coordinator hire might impact recruiting and Crawley might be our first real hint that it is becoming a detriment.

Now the good news is that Bowen at the very least would be expected to be a position coach that could have some involvement with Crawley so perhaps he can step in and whether the storm. But with less than a month left in this recruiting cycle you would have to hope that we're close to hearing something on who exactly is going to be charged with fixing our defense.

Then we have that last bit of "twitter news". I'm not sure that phrase should even be used considering the amount of misinformation on twitter, but at least yesterday there did seem to be quite a bit of legitimate Kansas football information floating around.

That last bit of information comes from Darrian Miller's twitter account where Miller made some remarks that have been interpreted as another sign that his days at Kansas are likely over.

No screenshot here but the quote floating around would certainly make it seem that something has happened to sour him on Kansas football. At this point all you can do is continue to wait for something official or his absence from Spring ball but again, draw your own conclusions.

So there's that, the Kansas football twitter world in action. It's funny because you often have to filter through a whole lot of non-news to find any real news, but yesterday seemed to be chalk full of little tidbits and nuggets about our football team and the future of Kansas football.