Share All sharing options for: Kansas Basketball 50 in 50, No. 42: Tyshawn Taylor Player Profile

50 in 50 is a feature here at RCT counting down until the Jayhawks kick off the 2011 basketball season on November first. Got an idea for something you'd like to see featured here? tweet @rockchalktalk or @fetch9 or email me at fetch9 at gmail dot com.

Interspersed, hopefully somewhat evenly, among the 50 in 50 will be player profiles of the returning players for the 2011-12 Jayhawks. I don't have a template per se as to what I want to feature in these, so if there is anything specific you want to know just leave it in the comments and I'll address it best I can. That said, I figure Tyshawn is the perfect player to begin with.

2010-11: Tyshawn Taylor was the third leading scorer on the team last year, averaging 9.3 ppg, and was the most divisive character in the RCT comments section. On one hand, he has great athletic ability and a knack for the spectacular pass. On the other, he turns it over way too much which has caused some fans to publicly wonder whether KU wouldn't be best suited to go with Elijah Johnson running the point. One thing is certain: his play improved after his suspension late in the year, perhaps spurred on by Johnson's tremendous play

What he does well: Tyshawn's 27.4% assist rate was 6th in the Big 12 (minimum 40% minutes played) and he played more than everyone above him other than Lance Jeter and Diante Garrett (he was virtually even with Carl Blair). He is exceptionally quick with the ball, which he demonstrated in the home win over Missouri, when he beat his man off the dribble (by my count) 10 times in the first half alone. He's exceptionally quick passing the ball as well, not holding the ball for too long, which is key in Bill Self's offense. He also showed an improvement shooting: Though he only took 50 threes, he made 19 of them (38%) and also shot well from the free throw line (72%)

What he does poorly: Tyshawn has his problems taking care of the ball. His turnover rate of 26.7% isn't crippling, especially for how much he handles the ball, but for this year's team to be a threat it needs to come down. Though he is incredibly quick, I'm not sure I would call him an explosive athlete. Or at least say that he is a lot better north-south than he is laterally. Defensively his best game probably against Baylor, when he was able to utilize his wingspan against LaceDarius Dunn, whose best game offensively was backing guys down. But he struggles a lot more against smaller, quicker guards who can take him off the dribble. On offense, his ability to get into the rim is somewhat neutralized by some poor finishing skills. This is mostly because he's not really able to elevate over guys, or get clean looks, so he has to go to the floater a lot. Last year it certainly wasn't a good shot for him, and I'm surprised he managed to shoot even 50% from two.

Season outlook: Tyshawn is probably the most important player to KU's chances this year. While Elijah Johnson is a good fill in if Tyshawn is ineffective, KU needs both of them to play well. Assuming he was in the gym shooting hundreds of floaters and pull up jumpers per day, I think we'll see some good improvements from him. Given how much he has improved over his first three years, I'm excited to see what he has in store for this year. I also, due to said improvements and the role he occupies for KU, expect that he will be a low first round pick, or perhaps early second, in next June's NBA draft. 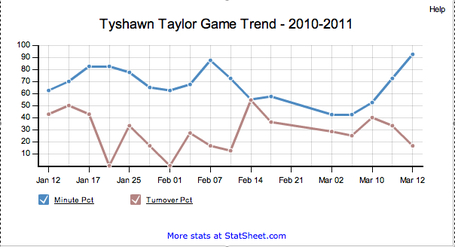 Basically what this chart is plotting is Tyshawn's minutes played (blue) vs. his turnover percentage (reddish brownish whatever color that is), and as you can see, for the most part as he plays more he turns it over less. Some of that intuitively makes sense, as a player has to turn it over only a couple times to have a high turnover% when he doesn't play much, but perhaps there is something to the thinking that he needs to get into the flow of the game before he is most effective.