A lot was made about Turner Gill's rules last year.  The no cell phone thing, 10pm or whatever the story was on weekdays and now another one is instituted.  For those that follow twitter, and especially if you follow any of the football team, you probably already know.  The Kansas Jayhawks signed off last night.

It's certainly no coincidence that the sign off from many of the Jayhawk football team followed what would have been the first team meeting of the season.

It's really no surprise.  Steve Spurrier announced a similar policy during SEC media days saying that he had "some dumb immature players that put crap on twitter".  Other social networking policies are springing up around the country with the growing popularity of facebook and twitter which have become a part of the everyday lives of many.  The access to athletes has increase exponentially and while that access and insight is often a fun and candid look for fans, it's hard to say what benefit really comes from it.

Yes we learn a little more.  Maybe you hear about an extra hard practice, or catch wind of news about an injury as was the case this Spring with Brandon Bourbon.  But there is probably a greater risk of something slipping or being misinterpreted and causing damage which is something college programs are extremely conscious of.

A quick glance at the number of NFL players that have found themselves backtracking or in a pinch because of a "tweet" is about all you need to realize that the ban by Gill is probably a good move even if it cuts us off from the day to day a little bit.  In the end it might not have a huge impact on the results come Saturday, but it probably errs on the side of caution when it comes to representing the University of Kansas which is fine by me.

And with that, a couple tweets from Matt Tait who spent yesterday checking in on the team as they checked in to camp. 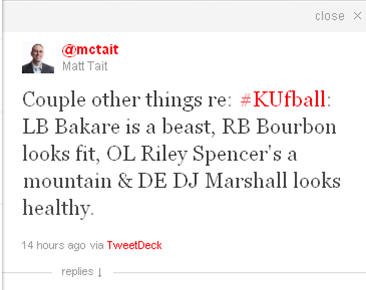 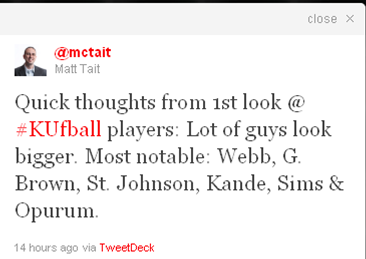 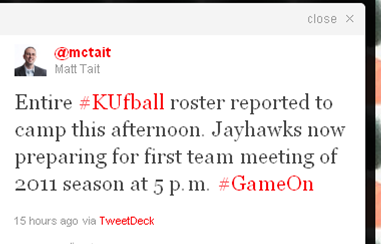 Nothing earth shattering but the news that the entire roster did report is a nice sigh of relief.  There were a couple players in question and you never know what's going to transpire during those five days between the final workout and the first day to report.