This fall, I plan on expanding on something I have done in the past here on RCT by breaking down film each week from the Jayhawk's previous game (or as often as I can get my hands on some tape). To get us rolling, I thought I'd examine a staple of our offense - the zone read.

Of course, I chose a James Sims touchdown run from our lone league victory last season. A pretty simple play, but as we will learn, this play can lead to paydirt if executed properly. A few simple things turn this into a monster play that helped KU beat the mighty Buffs last year. Let's go pre-snap. 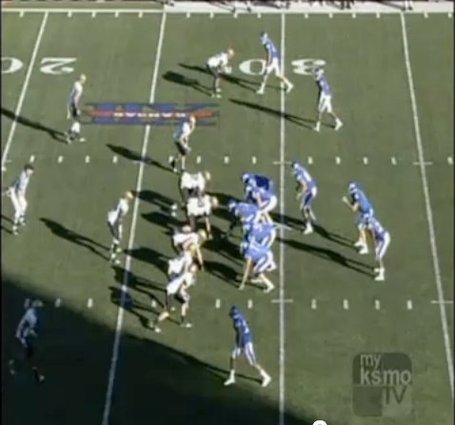 KU lines up in a pretty basic shotgun set, and with two receivers at the top of the screen plus the tight end motioning that direction, we have a clear strong side and weak side. Colorado shows a blitz from the outside, and stacks two defenders on Kansas' weak side to gain a pass rushing advantage. Luckily for us, this leaves only one LB and one safety (currently out of the picture) in the middle of the field. CU has played right into our hands if the QB makes the correct read and hands the ball off to the back. 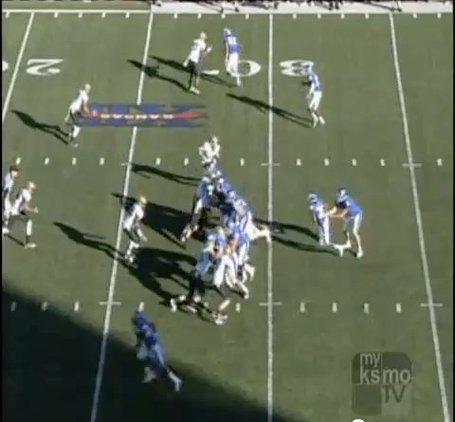 After the snap, you can see how Colorado has already potentially sealed its own fate. The defensive backs are focused on the WRs and aren't even looking at the backfield, and the outside blitzers are out of the play. Thus, a juicy hole has developed right in the middle of the field. The QB correctly reads that the hole is in the middle and going outside will result in pain, and hands the ball off. At this point, only Colorado's middle linebacker and safety (who correctly reads run and has joined the party at the far left of the screen) are in a good position to make the play. 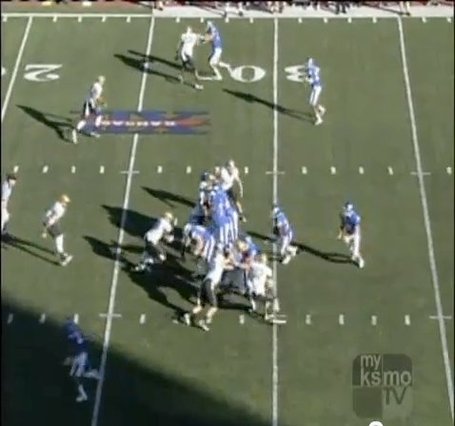 Here is where execution pays off. One of KU's interior offensive lineman has shed his initial block and moved next level. This spells trouble for the lone middle linebacker, who has moved into position to make the play. The RB is sitting in a mammoth hole, and can actually go either left or right - depending how the block the offensive lineman makes. Colorado's defensive backs still do not recognize the run. 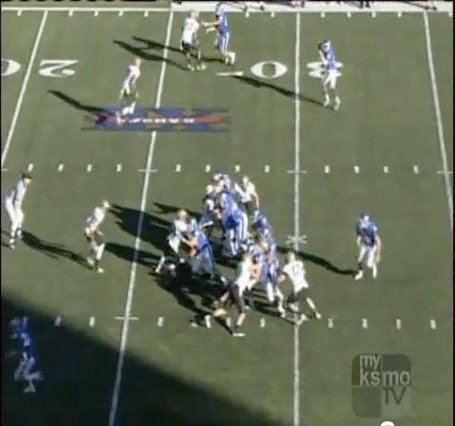 Bang. Not only does our offensive lineman execute a beautiful block on the linebacker, but he seals him off from going towards the bottom of the screen - the weak side. Had the RB been forced to go towards the strong side, there would have been two defensive backs in the area (although as you can see, they STILL aren't looking at the ball). Colorado's safety has made it close to the line, but he has jumped at the wrong side of the hole. 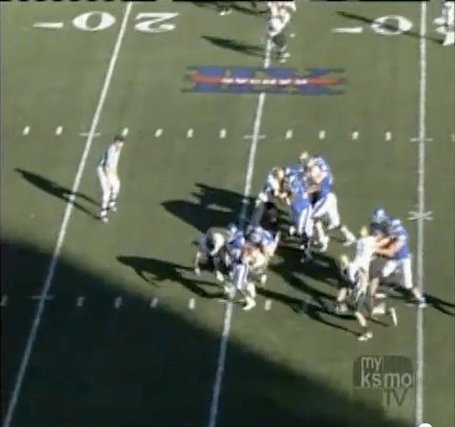 From here, the Buff's linebacker is unable to shed the block, meaning that the safety is the only player standing between the running back and the end zone. As we noted earlier, he didn't take the best angle to the play. He gets close, but winds up tackling a nice big chunk of turf as the running back breaks free. Give credit to one of Colorado's defensive backs at the top of the screen I keep picking on - he finally has his head turned and recognizes the run. Ya know, after the ball carrier has passed him on the field. 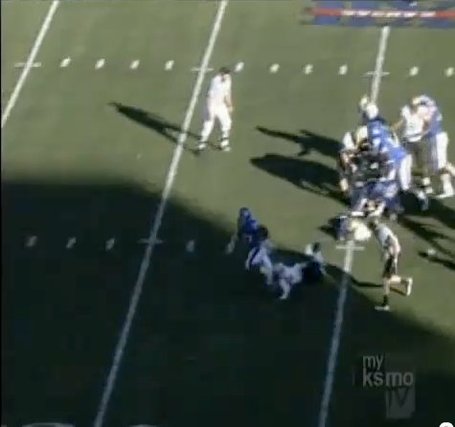 As we saw earlier, the safety is a split second late, and the running back blows past an ankle tackle. No one else is even close to the play. Wham, bam, thank you ma'am - touchdown Jayhawks.

A few things to note here: First, this play is a disaster waiting to happen for Colorado. The Buffs' decision to bring heat from the outside leads to a big hole in the middle. Even without the blocking execution, Sims is likely still finding a big gain with all that real estate. A few seconds later, a well executed block and a poor play by the safety (although to be fair, he is in a tough spot) turn a good play into a touchdown. Kansas is who we thought they were (sit down Denny Green), but one thing the Jayhawks have is a bevy of talent in the backfield. More often than not, if one of our running backs find themselves in a one on one situation in the open field, they are going to win that battle.