Share All sharing options for: Kansas Jayhawk News and Notes 7.6.11 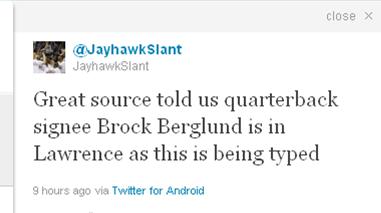 Jayhawkslant looks to be squashing the Keegan talk just a few days after the article that drew heavy criticism from the Kansas fanbase.  At this moment Berglund is reportedly in Lawrence.  Now it begs the question as to whether he can compete at this point for the starting QB spot yet this fall?

I think the safe bet is still on Webb and that's who I expect to start the season opener.  Perhaps a redshirt year would be the best situation for Brock, but with four QB's on the roster and two being freshman in Berglund and Cummings...Turner Gill and Chuck Long could be looking to start the clock on one of these sooner rather than later.